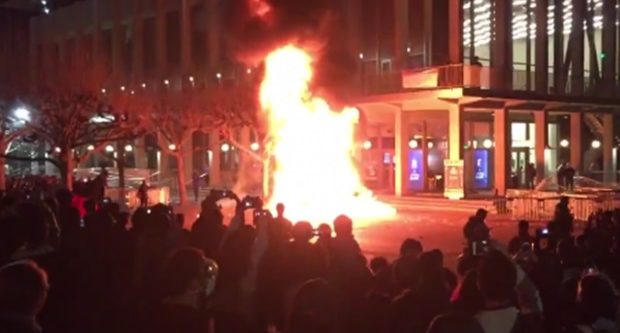 The socialist democrat party, the corrupt and dishonest leftist democrat media, and their intolerant ideological allies including individual and corporate donors, violent leftist groups, thugs, and criminals have declared a mean and nasty all-out war on the newly elected Trump government, the republicans in congress, and the hardworking American people trying to live their lives in peace and security while they actively pursue the American dream of life, liberty, and the ongoing pursuit of happiness for themselves and their families.

This onslaught against our duly elected government and its people is similar to the rise of the National Socialists (Nazis) in Germany when they practiced brutal discrimination against the Jewish people and increasingly against Christians while using intimidation, violence, destruction, and the breakdown of law and order to weaken and finally cause the collapse of the Weimar Republic with the result of Hitler and the National Socialists (Nazis) seizing power through propaganda, misinformation, lies, violence, and corrupted elections.

Americans who support and cherish our traditional American values of a Constitutional Republic, life, liberty, pursuit of happiness, sacred property rights, and the pillars of our culture and society including faith, family, church, locally controlled schools, community, and the virtues and freedom of a limited government would do well to remember the immortal words spoken by Prime Minister Winston Churchill during World War II when he took a courageous stand by rallying the British people to fight and give their all against the brutal and evil tide of the National Socialists (Nazis) sweeping over the world hell bent on putting them under the iron boot of violence, tyranny, and total subjugation: