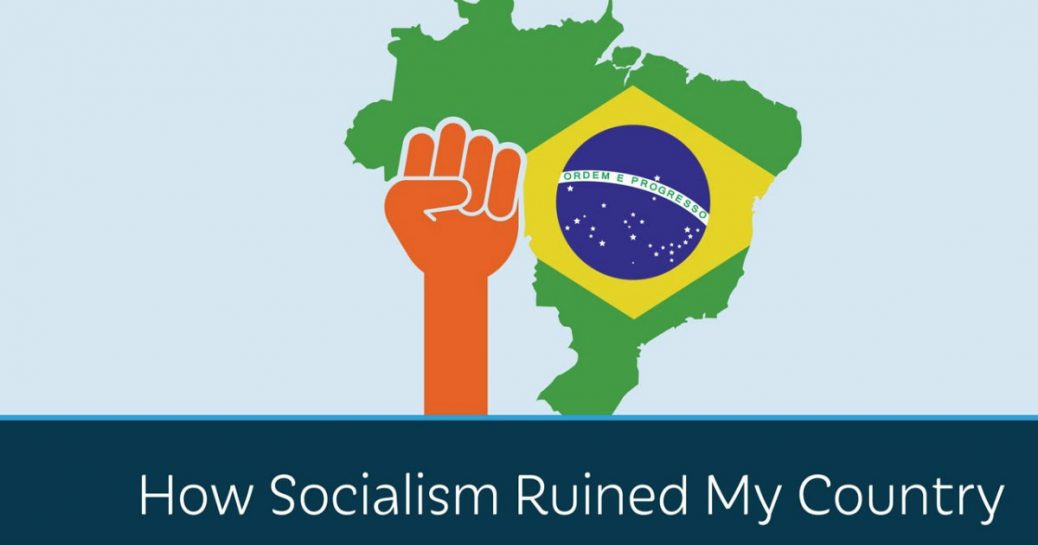 Brazilian journalist Felipe Moura Brasil watched the recent American elections with a mixture of awe and horror. He could simply not understand how educated Americans who are supposedly paying attention to the world around them could possibly be drawn to socialism, even as they watch the socialist nations of the world collapse into chaos.

The Brazilian recently connected with Prager University in an attempt to educate Americans about socialism and hopefully keep us off the broken and destitute path of our failing neighbors.

Many American millennials seem to be drawn to socialism. They came out in big numbers for Bernie Sanders in the 2016 presidential primaries. They rail against capitalism on their college campuses. They wear Che Guevara t-shirts to signal their socialist virtue. I know a lot about socialism. I live in Rio de Janeiro, and I work throughout Brazil as a journalist for a popular magazine. In the early 2000s, Brazil’s economy was growing rapidly. The government had enacted economic and monetary reforms and divested holdings in some state-run companies, giving the private sector more room to breathe. Inflation—a chronic problem in Brazil—was dramatically reduced. Foreign investors poured into the country, eager to catch a portion of our expanding economy. The future seemed promising. But today, our economy is in shambles, unemployment and debt are massive, and powerful politicians are being investigated for involvement in the largest scandals of fraud and corruption in the country’s history. What happened?

In 2002, a socialist politician named Lula da Silva ran for the presidency. He was a socialist, but painted himself as a modern, cool kind of socialist. He would be the politician who would heal national divisions and unite everyone. He even had a nickname: “Lulinha paz e amor,” which means “Little Lula peace and love” in Portuguese. But the old message about the need for income redistribution to decrease inequality was still there. The media, academic elite and celebrities assured Brazilians that by transferring the money from the rich to the poor, the poor could finally be richer. But the only ones who really got rich were Lula and his corporate and political friends. It only got worse under his successor, Dilma Rousseff. The socialists increased government spending, deficits, and debt. They called it a “stimulus.” They increased the minimum wage and the benefits of social programs. They called it “social justice.” They increased the salaries and retirement benefits of the civil service. They called it “investing in the future.” They handed out thousands of jobs in the government and state-owned companies as favors to their political allies. And they called it “good governance.” It worked for a while. Socialism always works at the beginning. But government spending just kept going up, and then Lula’s socialist paradise fell apart and the economy fell with it. The Free Courses for Free Minds .com outcome: from 2008 to 2015, government spending grew nearly four times as fast as tax revenue. The economy shrank 3.8 percent in 2015, the worst result in 25 years. That same year, a World Bank survey found Brazil’s economy to be one of the world’s worst. Out of 189 countries, we were the 16th hardest place to open a business, the 60th most difficult nation in which to register property, and the 12th most complex place to pay taxes. Economically and morally, the almost 15 years of socialist policies have greatly harmed Brazil. We also remain among the world’s leaders in murder and robbery, and we rank near the bottom of industrialized nations in terms of education and health care. Americans take it for granted that they can be born into the lower class and reach the middle or even upper class. Many Brazilians take it for granted that they can’t. But finally some things are starting to change. There may be reason for hope. Today, more and more Brazilians see that capitalism and limited government are the only way forward. Thankfully for Brazil, Lula has been charged in several lawsuits for corruption, involvement in a criminal organization, influence peddling, money laundering, and obstruction of justice. Rousseff was impeached in 2016 for falsifying the government’s finances and illegally using money from state-owned banks to run the government. This crisis prompted the new government to freeze federal spending, reduce the government’s role in state-owned companies, and to encourage some of the massive federal workforce to resign. No one knows whether these basic measures will be enough to rescue Brazil economically. Truthfully, the damage has been so extensive, it may take decades for the country to recover. But if we do, it won’t be socialism that saves us. American millennials, take note. I am Felipe Moura Brasil for Prager University.

You can give here to help Prager University continue their important work.