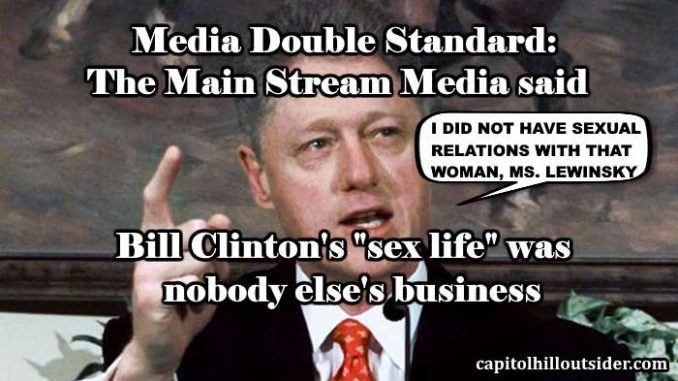 With the #MeToo movement in full flight, why hasn’t anyone in the legacy media finally held former U.S. president Bill Clinton to account for his lifetime of boorish behavior?

What of his string of adulterous affairs with numerous accusers—even within the Oval Office?

Where is this partisan’s “honesty, dignity and rectitude”? In reality, Mr. Cohen engages in the yellowiest journalism by using language better suited to the gutter: “But Trump himself is a slut. He is a liar and a moral harlot who revels in irresponsibility and bad-boy behavior.” To paraphrase the Bible, “Let he who is without sin cast the first stone” (John 8:7). That would be good advice for the Post’s holier than thou columnist to heed: especially given his own sexism directed at a younger, female subordinate in the workplace. As reported in June of 1998 by the Washingtonian’s Harry Jaffe in “Cohen Gets Kid-Gloves Treatment in Harassment Case”:

“Among the allegations reported to [deputy managing editor Milton] Coleman: Cohen asked [Devon] Spurgeon to come into his office and close the door, then queried her about her generation’s view of oral sex. Also at issue: a conversation where Cohen said it’s too bad Bill Clinton is the only one who can grope in his office and get away with it. He also is said to have intimidated her with references to his connections with top Post editors, such as Tom Wilkinson, who can hire and fire.”

How is it not beyond creepy for a then 57-year-old man to question a then 23-year-old editorial aide about sexual mores? At the time, the Post’s response was simply to move his office to a different floor. As for curbing potential misdeeds, that’s about as effective as moving an accused pedophile priest to a new perish. Indeed, all these years later, where’s Richard Cohen’s, or The Washington Post’s, integrity and transparency regarding these events? As of now, this stone thrower is still employed there. In fact, sanctioned for decades to point fingers at others while ignoring his own less than chivalrous conduct. (As was typical in the Clinton era of “bimbo eruptions,” the wagons were circled and the young woman in question was blamed.) Unfortunately, his journalistic old boy’s club is still stuck in Clintonian amber. Neither Clinton nor Cohen have yet received their deserved comeuppance in 2018.

Upon reflection, how was the lurid, sex scandal-plagued Clinton era not a shadowy reflection of recently exposed Hollywood sex scandals (read: Clinton friend and donor Harvey Weinstein), and the #MeToo movement? In both cases, didn’t prominent Democrats misuse their lofty positions to exploit underlings for sexual favors? Specifically, when Bubba chased Monica around the resolute desk in the Oval Office, wasn’t Bill’s bad-boy behavior (with her and others) equivalent to the adulterous antics of a bathrobed Harvey? Rightly, today’s press has excoriated the disgraced movie mogul Yet, Bill’s extramarital affair with then 22-year-old White House intern Monica Lewinsky is still treated with kid gloves. Ironically, his still traumatized former paramour, now 44, couldn’t bring herself to hold the Clintons responsible in her candid March 2018 Vanity Fair article: he for his arguably predatory behavior; she for calling Lewinsky a “narcissistic loony toon”. Shouldn’t the Clintons be held to the same standard of conduct that the media is rabidly trying to hold The Donald to?

The hard left media continuing to protect the coddled Clintons conveys the message that questionable actions, or words, have no bearing on character or a president’s ability to lead the nation. And despite the sea change regarding sexual harassment, Bill and Hillary have survived their various imbroglios, haven’t they? So, it stands to reason that President Trump will also survive the supposed peccadilloes of his past. Before applying such blatant double standards to U.S. presidents, Democratic surrogates of the biased MSM need to take a long look in a mirror. Not to do so shows the truth of what they are: untrustworthy mudslingers of salacious leftist propaganda.

David L. Hunter is an Associate Editor at “Capitol Hill Outsider” and a “Newsmax” contributor. He’s on Twitter and blogs at davidlhunter.blogspot.com. He is published in The Washington Post, The Washington Times, “FrontPage Mag,” and extensively in “Patriot Post,” “Canada Free Press” and “American Thinker.”