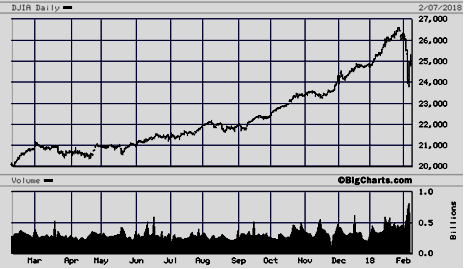 The “stock market” has been in the news as a measure of the Trump Presidency, and it is, but it has a strange nature and one that should be taught as it is a major indicator of the mind of the nation.

Capital drives the world and the equities, stock and bond, markets where people put their serious savings are the focus of capital formation.  You should be an investor and it is easier now that it has ever been thanks to computers and cell phones with data feeds.

A few cautions:  Avoid annuities and funds as they have high maintenance charges and controlled, slow access which favors the managers more than the clients.  The people who run the funds charge too much for their services and are slow to react to buy or sell orders.  Now you can do it yourself and instantly, but when?

This last year, thanks to enthusiasm generated by President Trump’s work at “flushing the DC toilet” of regulations, restrictions and corruptions falling like Mayflies under a small town streetlight, the Dow Jones Industrial Average of 30 reliable stocks started the year at 22,000 and for eight months ran up 10% to 24,000 on August 1.  Then it took off in a two-step to gain another 10% in half the time, four months, ending December 1, 2017!

Equities professionals are acrophobic; they are afraid of heights, and wisely so.  Since the days of the Tulip Mania in 17th century Holland the investor class has believed “If it’s too good to be true; it’s not.”  So, they get nervous on rapid rises and make a move.  Usually the nervousness lasts four or five days and usually straddles a weekend.  The most frequent day of decision on Wall Street is Tuesday, but a telling sequence of events has happened the four or five days before that will alert the educated investor to sell and “go to cash” or buy and “go to Nirvana,” which is not a small town in Illinois.

While trading continues experienced and educated traders look for patterns that document the mood of the market, which is the sum of all the shareholders opinions.  They are documented by capital “W” or “M” patterns in the trading data.

If the market has been in decline look for the formation of a “W” in the price data line.  The more it looks like printed “W,” with a flat bottom and top, the better.  It takes four days to form so you have plenty of time to see it.  On the fifth day if the stock breaks above the top and gains more than 0.6% of the previous day’s closing price it is the time to buy as it is on an upward leg and confirm the majority of traders think the market will rise significantly and more often than not, it does.

This market did not make such a pattern instead it turned up quickly and appears to be wanting to resume the rise.  Such an abrupt turn is irrational and tells us the market is running on emotion, but these are such times and you have to pay attention as it appears there is more erratic behavior to come.  At some point the market will settle and it will indicate it by “printing” “M” and “W” letter patterns in the charts.  They are the equities sign of stability.