Shock News! FBI was On Scene at Garland, Texas Terror Attack… but Did NOTHING 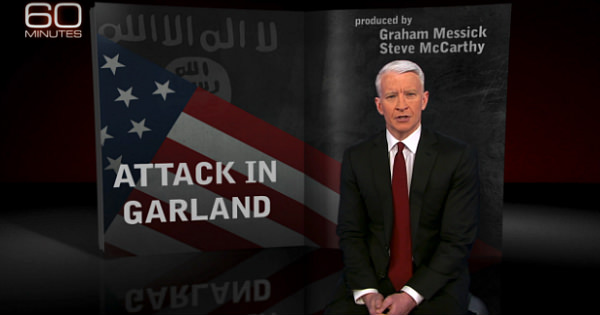 In a shocking new report for CBS’ 60 Minutes, Anderson Cooper reveals that an undercover FBI Agent was on scene before the Muslim terrorists began their assault on a free speech conference in Garland, Texas back in 2015.

The agent had been tracking the two Muslim men who were on their way to Garland, and had even arrived there before them and taken pictures of them as they arrived… but once the chaos began he did nothing to intervene!

Anderson Cooper: After the trial, you discovered that the government knew a lot more about the Garland attack than they had let on?

Dan Maynard, Attorney for the Terrorists: That’s right. Yeah. After the trial we found out that they had had an undercover agent who had been texting with Simpson, less than three weeks before the attack, to him “Tear up Texas.” Which to me was an encouragement to Simpson.

The man he’s talking about was a special agent of the FBI, working undercover posing as an Islamic radical. The government sent attorney Dan Maynard 60 pages of declassified encrypted messages between the agent and Elton Simpson – and argued “Tear up Texas” was not an incitement. But Simpson’s response was incriminating, referring to the attack against cartoonists at the French magazine Charlie Hebdo: “bro, you don’t have to say that…” He wrote “you know what happened in Paris… so that goes without saying. No need to be direct.”

But it turns out the undercover agent did more than just communicate online with Elton Simpson. In an affidavit filed in another case the government disclosed that the FBI undercover agent had actually “traveled to Garland, Texas, and was present… at the event.”

I was shocked. I mean I was shocked that the government hadn’t turned this over. I wanted to know when did he get there, why was he there?

And this past November, Maynard was given another batch of documents by the government, revealing the biggest surprise of all. The undercover FBI agent was in a car directly behind Elton Simpson and Nadir Soofi when they started shooting. This cell-phone photo of school security guard Bruce Joiner and police officer Greg Stevens was taken by the undercover agent seconds before the attack.

Anderson Cooper: The idea that he’s taking photograph of the two people who happen to be attacked moments before they’re attacked.

Dan Maynard: The idea that he’s right there 30 seconds before the attack happens is just incredible to me.

Anderson Cooper: What would you want to ask the undercover agent?

We wanted to ask the FBI those same questions. But the bureau would not agree to an interview. All the FBI would give us was this email statement. It reads: “There was no advance knowledge of a plot to attack the cartoon drawing contest in Garland, Texas.”

If you’re wondering what happened to the FBI’s undercover agent, he fled the scene but was stopped at gunpoint by Garland police. This is video of him in handcuffs, recorded by a local news crew. We’ve blurred his face to protect his identity.

I can’t tell you whether the FBI knew the attack was gonna occur. I don’t like to think that they let it occur. But it is shocking to me that an undercover agent sees fellas jumping out of a car and he drives on. I find that shocking.

Anderson Cooper: That he didn’t try to stop–

Dan Maynard: He didn’t try to stop ‘em. Or he didn’t do something. I mean, he’s an agent, for gosh sakes.

Anderson Cooper: If this attack had gone a different way, and lots of people had been killed, would the fact that an undercover FBI agent was on the scene have become essentially a scandal?

Seamus Hughes, Counter Terrorism Expert: It woulda been a bigger story. I think you would have seen congressional investigations and things like that. Lucky for the FBI and for the participants in the event you know, here in Texas, you know, everyone’s a good shot there.

The FBI’s actions around this foiled attack offer a rare glimpse into the complexities faced by those fighting homegrown extremism. Today, the battle often begins online where identifying terrorists can be the difference between a massacre, and the one that never occurred in Garland, Texas.

Anderson Cooper: People brag about stuff. People talk big. One of the difficulties for the FBI is trying to figure out who’s just talking and who actually may execute an attack.

Seamus Hughes: That’s the hardest part when you talk about this, right. There’s a lot of guys who talk about how great ISIS is. It’s very hard to tell when someone crosses that line. And in most of the cases, you see the FBI has some touchpoint with those individuals beforehand. There had been an assessment, a preliminary investigation or a full investigation. It’s just very hard to know when somebody decides to jump.