Sharia and the Swastika 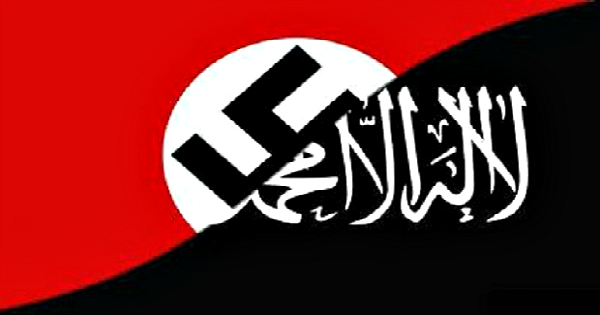 As a tree hugging, yoga doing kind of citizen I prefer natural things whenever possible. Remember good old Victory Gardens where folks at home planted greenly to help the war effort…where we all worked together for America’s good? Remember how FDR helped create the United Nations in order to prevent future World Wars…and how part of the horror of World War 2 was the torture and slaughter of between 11 and 17 million people, 6 million of whom were Jewish?

There are many stories told by survivors of the holocaust. At the main trial of Nuremburg it was proven that Nazis attempted to make soap out of the fat of Jewish corpses. Controversy surrounds this grisly detail of Hitler’s diabolical reign, but at the very least it is clear that if indeed this was just a myth, the myth was pressed upon Jewish survivors so cruelly that four Jewish soap bars were wrapped in a shroud and buried at the Haifa cemetery in 1948.

No worries though, the U.N. has this covered. On January 27, they tell us to remember what happened to Jews on National Holocaust Day. Problem solved right? After all holidays and vayjay parades are what make the world spin ‘round and we really shouldn’t expect more from them than that. The U.N. also remembers what happened to our country on 9/11 and sympathizes with us on that day.

Did you know that Sharia means the path or way…that Muslims believe that Sharia is the way to peace? The UN is about forwarding peace among all peoples around the globe. The U.N. forwards Palestinian rights, encourages immigration of terrorists to the U.S. in spite of the fact that terrorism is out of the control in the EU, and chides our President for not following suit. The Islamic community who is courting them is either in huge denial about the holocaust…that it never happened… or that Hitler failed to finish the job off. The U.N. claims to not want another holocaust while they play with Arab countries who aided and abetted the Nazi plan to exterminate the Jews.

Prime Minister Netanyahu states,” Hitler didn’t want to exterminate the Jews at the time, he wanted to expel the Jew. And Haj Amin al-Husseini went to Hitler and said, ‘If you expel them, they’ll all come here (to Palestine).”’

Hitler then asked, “What should I do with them?” and the mufti responded, “Burn them.”

Similar to Hitler’s reign, Islamic youth are trained from the time they are small to hate the enemy. The Muslim Brotherhood furthers hatred of Jews through University groups like MSA throughout campuses across the United States. There are portions of our country where Sharia law is already being demanded and is considered as above the Constitution. Resistance groups have taken to our streets looting… beating innocent citizens… and calling for the death for our President… and Liberals say Trump is the next Hitler??

As Forest Gump would say, “Stupid is, as stupid does.” I’m going to tweak that a little and say, “Hitler is as Hitler does.” I have never seen Donald Trump exploit children for political reasons…but liberals are willing to mock the innocent Trump children to forward their cause. I have never heard Donald Trump say that he desires the extinction of a race… but Islam does.

Days dedicated to tragedies of the past are not true markers of whether or not the world grieves for those lost. Observing a day… doesn’t mean you have learned from it.