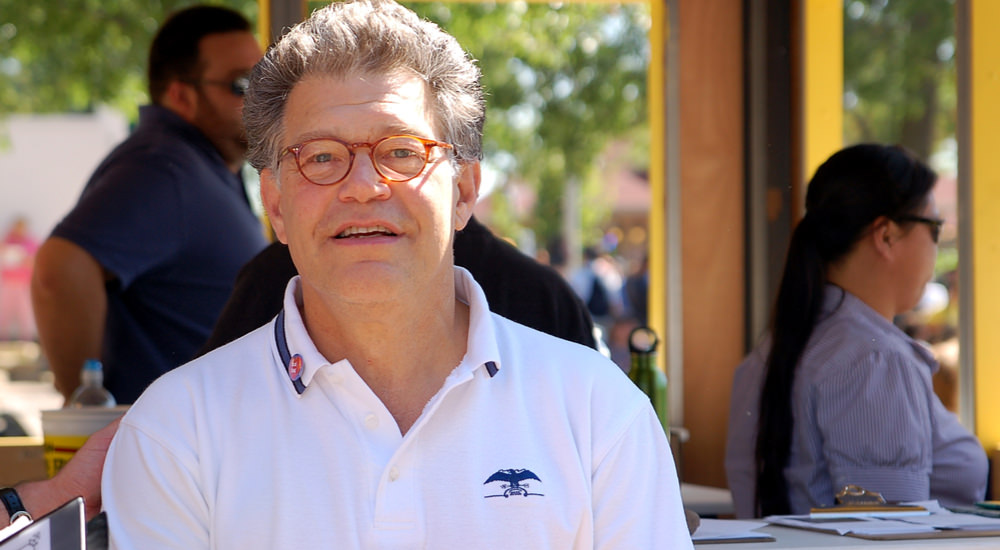 Twitter and the Internet are on fire with many articles from a variety of sources revealing that Franken did indeed sexually assault LeeAnn Tweeden while she slept with demands for his immediate resignation with Democrats among them. Now a second victim, Melanie Morgan, says she was a victim of Franken.

Media Equalizer Co-Founder Melanie Morgan has come forward as well, recounting her own experience with the onetime comedian, liberal radio host and activist. Morgan’s disturbing encounter was sparked by daring to disagree with Franken during an August, 2000 edition of ABC’s Politically Incorrect with Bill Maher.

“I made a statement about the budget numbers, Franken challenged me, I challenged him back. It was about spending priorities, actually just a mundane discussion. But he obsessed over it.”

After the show, Morgan said Franken wouldn’t leave her alone, insisting on continuing the argument. [more]

The Hill: Woman accuses Al Franken of kissing, groping her without consent

Democrats are cowards when it comes to it. Red State: Democrats Cancel Press Conference To Dodge Franken Groping Questions

KABC: Senator Al Franken Kissed and Groped Me Without My Consent, And There’s Nothing Funny About It

Esquire: This Statement Is Not Enough, Senator Franken

And your constituents probably feel the same way.

[LeeAnn Tweeden said,] “[Franken] repeated that actors really need to rehearse everything and that we must practice the kiss. I said ‘OK’ so he would stop badgering me. We did the line leading up to the kiss and then he came at me, put his hand on the back of my head, mashed his lips against mine and aggressively stuck his tongue in my mouth. I immediately pushed him away with both of my hands against his chest and told him if he ever did that to me again I wouldn’t be so nice about it the next time. I walked away. All I could think about was getting to a bathroom as fast as possible to rinse the taste of him out of my mouth.”

“I’m still angry at what Al Franken did to me. Every time I hear his voice or see his face, I am angry. I am angry that I did his stupid skit for the rest of that tour. I am angry that I didn’t call him out in front of everyone when I had the microphone in my hand every night after that. I wanted to. But I didn’t want to rock the boat. I was there to entertain the troops and make sure they forgot about where they were for a few hours. Someday, I thought to myself, I would tell my story. That day is now.”

There is a picture of a sexual assault. Senators should call for Franken’s resignation.

Gillibrand said she believes Leeann Tweeden after she alleged that Franken kissed and groped her during a USO tour in 2006.

A woman just accused the Minnesota senator of sexual misconduct. If he’s really an advocate for women’s rights, he should step down.

After initially trying to sidestep the matter, the party offered harsh condemnations and then calls for an investigation into one of their own.

Democrats’ credibility on sexual harassment is at stake.

There is no rational reason to doubt the truth of Tweeden’s accusations, no legitimate defense of Franken’s actions, and no ambiguity here at all: Franken should resign from the Senate immediately. Democrats should call for him to step down straightaway. This revelation is a test of the Democratic Party’s consistency, honesty, and decency. If Democrats wish to preserve whatever moral standing they have today, they must exhort Franken to leave the Senate, with no hesitation or reservations.

Free Beacon: Liberals Are Disappointed in Franken, Call for His Resignation

Washington Times: ‘The View’ shreds Al Franken: ‘This is not acceptable’

“It’s just so disappointing,” co-host Joy Behar said. “But men of all different stripes are out there doing crazy [things].”

The other women agreed that sexual harassment is not a partisan issue and should be condemned on all sides.

“It’s not acceptable for anyone to do it,” Whoopi Goldberg said. “This has nothing to do with your political leaning. This is not a partisan issue. You shouldn’t be doing this, and you should know better.”