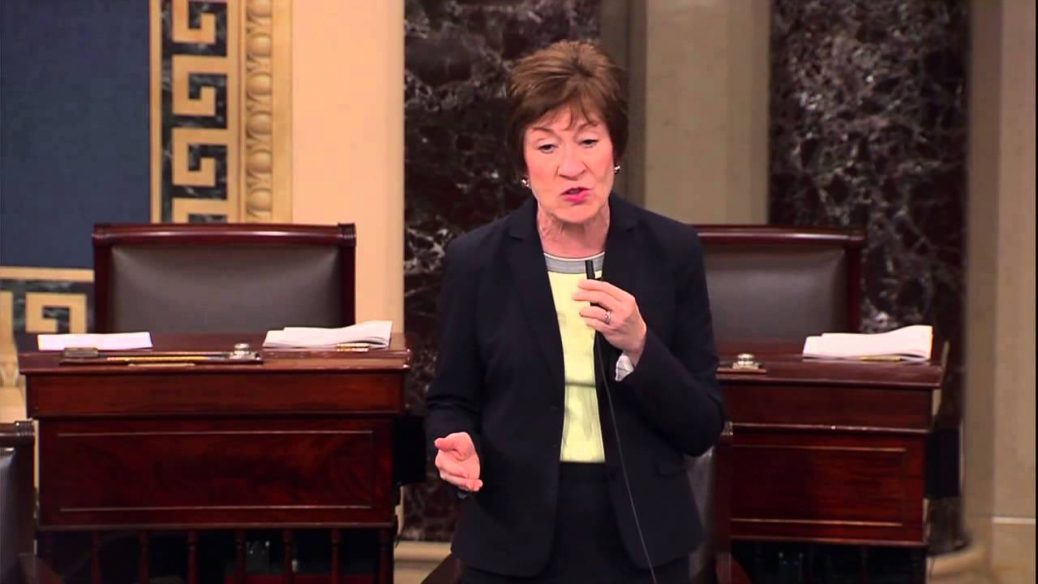 Notice the word Republican was not placed after Senator Collins name. Being originally from Maine, and watching this turncoat to Republicans stab Conservatives in the back time after time, would make the hair on a snake crawl. Bless her heart, though, she feels like she has the best interest in America, as she along with Liberals destroy the foundation of America, the Constitution.

“Maine’s Sen. Susan Collins rolled out a bipartisan group of Senate supporters Tuesday for a compromise gun control measure that would prohibit any person on either of two federal terrorism watch lists from buying firearms.” Now what is forgotten by Ms. Senator, is that the federal government cannot control the TSA, the IRS, nor the Obamacare records and computer files. Why would she believe that this would change, the sun would come out, the Maine hummingbirds would start humming, and the moose would all just start loving humans? Because as many Liberals, which she states she is a Republican, believes that a wish is better than reality.

“Collins’ proposal would prohibit those on the federal “no-fly” and “selectee” lists from purchasing a firearm. Those on the selectee list are allowed to fly after an intensive screening. The bill includes a five-year look-back provision to alert the FBI to gun purchases by someone who had been on the broader Terrorism Screening Database, and would allow anyone on the lists who is prohibited from buying a gun to appeal.” So Tell me Ms. Senator from Maine, how do you propose that the Federal government will do this without animosity towards one who brings negativism out concerning federal politicians, or different parties as we saw from the IRS, and how do you propose it will be more accurate and precise than what the TSA has shown? The cost, will it be an amount that is feasible, or will it increase 200 fold like Obamacare? No Senator Collins, your idea is wrong for several reasons, not excluding limiting mine, yours, and every American’s Constitutional rights.

Collins tried to explain away our Constitutional rights by “‘Essentially, we believe that if you are too dangerous to fly on an airplane, you’re too dangerous to buy a gun,’ said Collins, a Senator. Collins said she and those who worked on the proposal and joined her Tuesday, three Republicans, four Democrats and Maine Sen. Angus King, an independent, support different versions of gun control legislation, but “all of us are united in our desire to getting something significant done on this vital issue.”

The issue is not guns as many have stated over and over, but how we spearhead the laws on the current law books. We can discuss how the FBI ignored real concerns about the Orlando shooter, and how many times these shooters have bought guns because there is no way to determine their mental stability, which should be a real concern. So why don’t senators and congress people put more punch on the current laws by fining those establishments responsible to fulfill current law, and stop trying to come up with new Simon Says laws to secretly take Away America’s constitutional rights?

Till that time occurs, I recommend that Senator Collins stop drinking all of the Maine Maple syrup, and bless her heart, read the constitution in its pure form at least once a week, until she understands it.