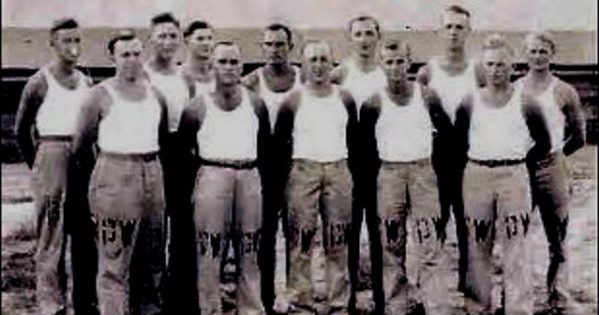 The images coming out of Houston, Texas remind me of the greatest flood of my life in Jeffersonville, Indiana in the spring of 1944.

A group of captured German submariners were held in a small, special POW camp just outside of town. It had been jury-rigged at a US Navy supply depot as we had captured the U505 which had an Enigma code machine in it and our people were anxious the Nazis not know we had it.

By moving these men 800 miles inland we were in violation of the Geneva Accords as they stipulated such men were not to be kept more than 100 kilometers, 62 miles, from where they were captured.
The camp was amazingly casual and while they were behind barbed wire it was obvious to us they could make an escape if they were really serious about it. Groups of us kids would walk out there on Saturdays to look at them and talk with them at the fence. They looked like high school boys to us, save the Commander who had a beard. All were learning English. Of course our parents did not approve of this so our seeing these guys and talking to them was a big hush-hush secret at the Chestnut Street Elementary School. The stuff we could think of to do was amazing. We kept our mothers busy.

When the flood came our levies were thought to be inadequate as the predicted level was about a foot higher so workmen began putting ranks of “sandbags,” which were potato gunny sacks full of dirt. The work was going slowly and we were in fear the town would be flooded and panic set in.

The Commander of the 50 captured submariners offered his crew to do the work and it took about one hour for our city officials to accept. He assured us the men would make no escape attempt as they were glad to be out of the war and several were planning to stay here, if they could, after the war. Our people did not bother to query Washington for fear the answer would be “No!”

Those guys worked like nothing we had ever seen and it went on for a week or ten days! They were eating and sleeping in nearby homes and our people showed them every courtesy they could, including sharing their SPAM with them. Apologies were in order, but they politely ate the stuff, along with the rest of us. To think Charles Hormel got a special award medal for that stuff from FDR gave me my first big doubt about the veracity and motivation of politicians.

Meanwhile, back at the flood, it was clear these men saved the town as the water level rose to the top of the bags precisely. Not one of the young men attempted to leave and after it was all over several got weekend passes to visit and stay overnight with friends they had made saving our town.