Sanders v Cruz – A Debate for the Ages 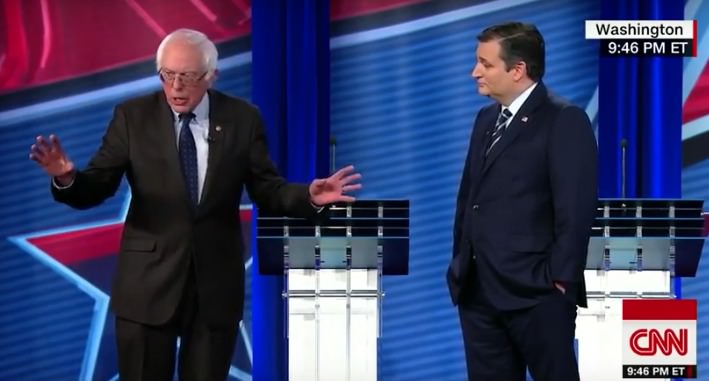 Scroll Down for the Audio Version

My son and I watched the Obamacare debate between comrade Bernie Sanders and Ted Cruz the other night.

We both agreed it was the most entertaining debate we had ever watched. It was actually fun. When was last time anyone could say that of a political debate? Answer: Never!

Debates are predictable and boring. We can mostly surmise what each candidate will say before they do. And it’s always droll political double-speak. They talk and talk and never say anything. It is a practiced and smarmy art form.

But this was different, which is why it was a relative ratings bonanza. Obviously people enjoyed it as it was the night’s top-rated cable news program in the 25-54 age bracket.

What I personally found fascinating and was pleasantly surprised by were that the moderators, Jake Tapper and Dana Bash, TV news stars in their own right, made no attempt to put themselves before the two participants. Many times over the last year, the moderators attempted to steal the limelight, as it were.

Left-wing, or at the very least, left-leaning moderators always attempt to intervene or inject themselves into the debate. Exhibit A might be the famous exchange between moderator Candy Crowley and Mitt Romney in 2012, or Martha Raddatz vs. Donald Trump. But they can’t help themselves. Whatever the job – leftist are leftists first and anything else is secondary.

But this was certainly not the case Tuesday night. Bash is a leftist and Tapper, although infinitely more fair than other journalists, is still left-leaning. Yet you wouldn’t have known it from their performance. Tapper and Bash kept the conversations flowing, but did little, beyond asking a few questions and introducing audience members.

Of course it helped to have two well-spoken individuals on stage who actually believed in what they said. And I think that was the big difference between this and so many other debates.

There were two believers on that stage Tuesday night. If you watched, other than Cruz citing some statistics from time to time, neither had a script, a teleprompter, or aid of any kind. They didn’t need it, for both are true believers. Both are well schooled on the topic and it’s evident to all that what either said was not just hollow rhetoric.

This was the debate we conservatives longed for throughout this past election season. It was amiable, jovial at times and clearly spelled out both sides of the argument for and against Obamacare.

Actually, truth be told, it was two arguments against Obamacare. While Cruz stressed the need to dump Obamacare for a free market (or at least freer market) healthcare system, Bernie passionately professed his desire for a single-payer, socialist system.

And to be honest, despite knowing that Sanders is just a wild-eyed whacky commie, which he sure did demonstrate, I came away liking the guy. I dislike every single thing he stands for, but I have to admit – I like the guy. He wasn’t offensive – he didn’t resort to name calling and he was even funny at times.

Cruz was exactly the way he always is. He’s brilliant and articulate, but not off-putting. He too was quite entertaining.

So who won? We did! We finally got an honest look into the heart and mind of an avowed socialist. For those who find this attractive, Bernie scored a slam dunk. And for those who believe in the free market and the private sector, Cruz was masterful.

I personally thank CNN for hosting the debate. They did a great job and I look forward to another debate between Cruz and Sanders. I’ll bet I’m not the only one.