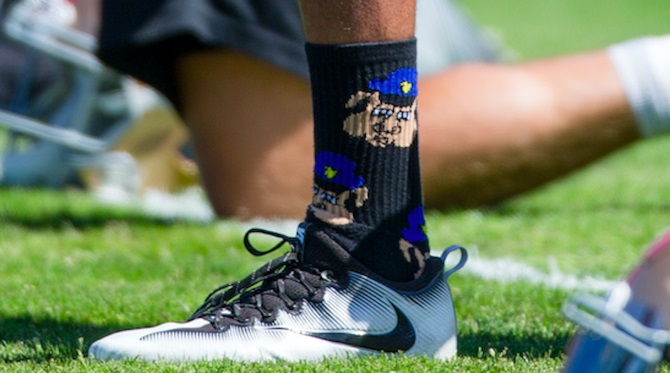 This is what Jesus meant when he said, “How can you say to your brother, ‘Let me take the speck out of your eye,’ when all the time there is a plank in your own eye?” – Matthew 7:4

Once again Kaepernick exhibits the degree to which liberals think dysfunctionally reflecting the brain damaged mentality of leftist ideology.  While again p*ssing on the military in San Diego, he says at a news conference that he has the utmost respect for people who serve in the military, and then wears socks depicting cops as pigs!  Newsflash for the brain dead – police are military!  They are the local government military paid by citizens (as is all the military) to protect them from domestic enemies, i.e. criminals.  Then he thinks saying he “has a policeman friend who agrees with him because he’s trying to bring attention to racism on the police force” will give him credibility.

Talk about the ultimate cop out!  First of all, when conservatives point out they have black friends who are on their side, liberals always belittle them as their “ornamental n*ggers” and call them “oreos.”  Second, saying that because a white cop who shoots a black criminal all cops are racists is not addressing racism among police, but deliberately distracting from the high crime among blacks.  To have BLM criminal terrorists who riot, loot, and attack white people say they are trying to stop racism is beyond the pinnacle of hypocrisy, but out in the Oort Cloud!

The police police themselves and don’t need criminals to correct their flaws.  The tiny percentage of police who may be racist does not compare with the number of blacks who make up 50% of the nation’s violent criminals when they are only 12% of the population (and surprise, they’re all Democrats!)  If liberals want police to stop shooting blacks then they should tell their blacks to stop being criminals and act like our blacks and be upright responsible citizens who go to school and get jobs.

The problem in this country is not police, but black culture that has destroyed the black family by glorifying criminals.

Liberals think they can get a pass with their good intentions.  Check out the Road to Hell.  This idiot thinks he’s bringing attention to the cops who are racists.  He’s the typical ignorant liberal using the excuse that bigotry exists to spit on all members of a group because of one time in a million one commits a racist act.  Leftists lack the moral compass to understand that condemning all police and all the military and all white people as bigots makes themselves the bigots!  Talk about telling your brother you want to take the speck of sawdust out of his eye while having a whole forest clouding your own vision!  And some of these poor fools apparently believe being infamous is as good as being famous.  Well, you can tell this peanut head his 15 minutes are up!