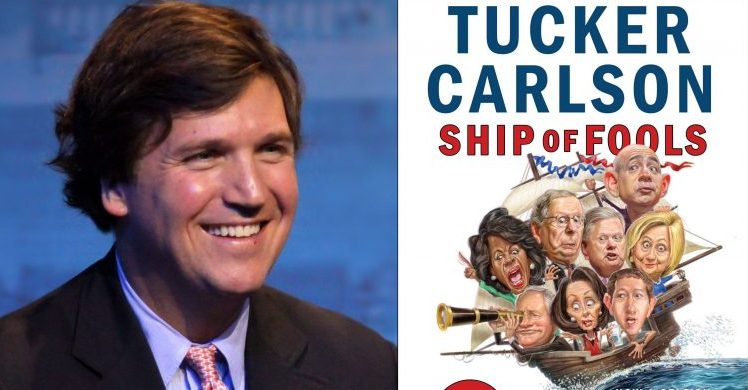 Pundit Tucker Carlson has all the pedigree to be comfortably sitting among America’s ruling aristocracy. Born Tucker Swanson McNear Carlson, his stepmother, Patricia Swanson, is an heiress to the Swanson frozen-food fortune and the niece of Senator J. William Fulbright. His father, Richard Warner Carlson, served as U.S. Ambassador to Seychelles and was president of the Corporation for Public Broadcasting and director of Voice of America in the Reagan administration.

Carlson’s new book, Ship of Fools: How a Selfish Ruling Class is Bringing America to the Brink of Revolution, lays out his political views as populist and unpredictable, far from “mainstream” conservativism and its power brokers. And unlike the usual media conservatives – who quickly dash off books lambasting Democrats and liberals – he can write.

In an article about Carlson in the Columbia Journalism Review, one of his former editors, Vanity Fair’s Tina Brown, was quoted as saying: “Tucker is a tremendously good writer and I always thought it was a real shame that he kind of like got sucked into this TV mania thing.” Mark Warren, who edited Carlson at Esquire, says, “He is an extremely talented writer. [Tucker’s] writing was done with such energy and vitality.”

The author has stated, “The premise of the book is really simple: Why did Trump get elected?” In Ship of Fools Carlson writes, “Trump’s election wasn’t about Trump. It was a throbbing middle finger in the face of America’s ruling class. It was a gesture of contempt, a howl of rage, the end result of decades of selfish and unwise decisions made by selfish and unwise leaders. Happy countries don’t elect Donald Trump president. Desperate ones do. In retrospect, the lesson seemed obvious: Ignore voters for long enough and you get Donald Trump.” He notes:

Various experts tried to explain [what happened]. Was it sexism? Russian propaganda? Hillary’s failure to campaign in the upper Midwest? Almost nobody suggested the obvious: if voters think you hate them for how they were born, they won’t vote for you.

Carlson points out, wagging his finger, that, “Instead of pausing, listening, thinking, and changing, America’s ruling class withdrew into a defensive crouch.” He goes on to say, “Countries can survive war and famines and disease. They cannot survive leaders who despise their own people.”

In Ship of Fools, Carlson highlights the fact that America has dissolved into a bi-partisan oligarchy that pretends to practice democracy, and that these moneyed elites “view America the way a private equity firm sizes up an aging conglomerate as something outdated, they can profit from. When it fails, they’re gone.”

As a commentator and critic, Tucker Carlson has impressive credentials and few peers. His “Tucker Carlson Tonight,” on Fox News, was the third highest-rated cable TV news show as of March 2018. As of October, with 3.2 million nightly viewers, it clocks in as second-highest after Sean Hannity show. Carlson, a Fox News political analyst since 2009, has hosted other TV and radio shows on MSNBC, PBS, and CNN. He has written National Magazine Award-nominated articles for Esquire, The New York Times Magazine, and Readers Digest. He co-founded and served as editor-in-chief of the popular conservative opinion website (12 million unique hits per month) The Daily Caller (full disclosure: articles by this writer are published on that site.)

One of his “Tucker Carlson Tonight” broadcasts reviewed a National Geographic article, “As America Changes, Some Anxious Whites Feel Left Behind,” which centered on Hazleton PA. Carlson commented on the growth of Hazleton’s Hispanic population, which has increased exponentially since 2000, signifies a change that “makes societies volatile.” Carlson asserted that “our leaders … caused all this,” and that they live in neighborhoods which “are basically unchanged – they look like it’s 1960. No demographic change in their zip code.” Carlson continued, “Our leaders are for diversity, just not where they live.”

In Ship of Fools, he argues, “Right now, the fault line is between whites and nonwhites. But as America grows more racially diverse, rifts will inevitably open between more groups. In a tribal system, every group finds itself at war with every other group. It’s the perfect perversion of the American ideal: ‘Out of many, one’ becomes ‘Out of one, many.’ This is the unhappy, blood-soaked story of countless civilizations around the world. It never ends well.”

Carlson also remarks, “But it does make for effective electoral politics, and that’s the point. There’s no faster way to mobilize voters than to stoke their racial fears, while promising to deliver for their particular tribe. It’s irresistible. At the moment, the coalition of identity groups has held together because it is united against white male power. But rapid demographic change makes this unsustainable. When the traditional scapegoat becomes insufficient, various factions will turn on one another. Chaos will ensue.”

Although Carlson’s writing style is breezy and funny, Ship of Fools says things that polite people don’t bring up at the dinner table these days:

In a country where, virtually, every nonwhite group reaps advantages from being racially conscious and politically organized, how long before someone asks the obvious question: why can’t white people organize and agitate along racial lines, too?

On television, Carlson signs-off every night saying thanks for watching “the show that is the sworn enemy of lying, pomposity, smugness, and groupthink.” That is a big target. For example, he writes that the definitive statement of the Democratic position on immigration was made by President Bill Clinton in his 1995 State of the Union address: “All Americans, not only in the states most heavily affected but in every place in this country, are rightly disturbed by the large numbers of illegal aliens entering our country. The jobs they hold might otherwise be held by U.S. citizens or immigrants. The public services they use impose burdens on our taxpayers.” Carlson says, “Pat Buchanan never put it more succinctly.”

Those who think the book will bash only the Clintons, Congresswoman Alexandria Ocasio-Cortez, and other Democrats will be sorely disappointed.

Ship of Fools is no apology for Trumpism. In fact, in his book Carlson calls Trump “vulgar and ignorant.” However, he correctly points out that Trump “didn’t invade Iraq or bail out Wall Street. He didn’t open the borders or sit silently by as the manufacturing sector collapsed and the middle class died.”

Carlson, like his comrade-in-arms, commentator and author Ann Coulter, has run out of patience with President Trump, pointing out that the emperor has no clothes. Coulter, the author of In Trump We Trust, says the president isn’t delivering “what he promised at every single campaign stop,” and is now more interested in getting “applause from The New York Times than staying true to his pledge.” Carlson explained in a recent interview with a Swiss newspaper that “I don’t think he understands the system.” Carlson contends that Trump “knows very little about the legislative process, hasn’t learned anything, [and] hasn’t surrounded himself with people that can get it done.”

Carlson sets a new paradigm for measuring politicians and public policy: “The rift is between those who benefit from the status quo and those who don’t.” Just as many Republicans fit that definition as do Democrats.

Carlson focuses little light on how to turn around the Ship of Fools but can be credited as the best navigator to expose where America shouldn’t be headed. The Heritage Foundation just awarded its 2018 Salvatori Prize for American Citizenship to Carlson: “At a time when the press has become doctrinaire and is afraid to discuss what really ails America, Tucker Carlson is one of the very few prominent journalists who hosts genuine debates and who challenges the pieties of both the Left and the Right,” said the powerhouse conservative think tank. “Thanks to his courage and insightful probing, citizens of our republic can still find a public forum where the most serious questions confronting the country can be discussed thoughtfully.”

Ship of Fools will certainly make the reader think outside the conservative-liberal box which makes it refreshingly new and different. This reader is looking forward to volume two, perhaps entitled, “The Right Course to Smooth Sailing.”