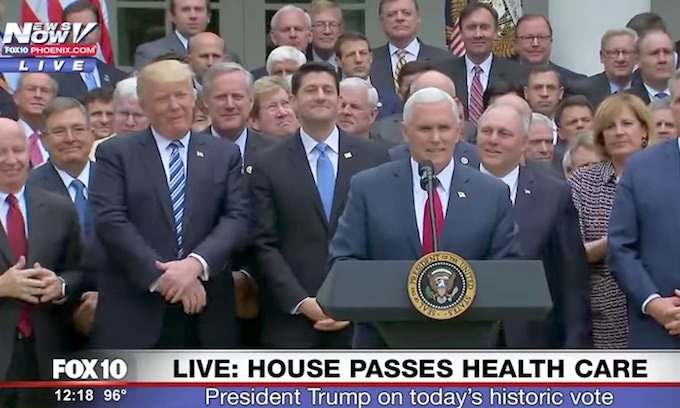 The House passed the new version of repealing and replacing Obamcare on Thursday May 4thincludes individual tax credits and grants for states replacing federal insurance subsidies.

While it was met with praise by many I still have my concerns about it and I’m not too sure about this. They should have made it available to the public first before voting on it. It sounds too much like Obamacare light to me. Especially the part about charging people a penalty who do not maintain continuous coverage and having older adults charged five times the amount of younger adults. I thought the idea was to have lesser premium amounts. Trump said premiums will come down and so will deductibles, but I don’t see that happening here. Maybe that will come in phase two.

Highlights of the GOP bill

On a bright side the bill eliminates all the Obamacare taxes such as a tax on medical devices I have listed here:

The American Health Care Act (HR 1628) passed by the House today reduces taxes on the American people by over $1 trillion. The bill abolishes the following taxes imposed by Obama and the Democrat party in 2010 as part of Obamacare:

-Abolishes the Obamacare Employer Mandate Tax. Together with repeal of the Individual Mandate Tax repeal this is a $270 billion tax cut.

-Abolishes Obamacare’s Chronic Care Tax on 10 million Americans with high out of pocket medical expenses. This is a $126 billion tax cut.

-Abolishes the Obamacare health insurance tax. This is a $145 billion tax cut.

-Abolishes the Obamacare 3.8% surtax on investment income. This is a $172 billion tax cut.

-Abolishes the Obamacare medical device tax. This is a $20 billion tax cut.

-Abolishes the Obamacare tax on prescription medicine. This is a $28 billion tax cut.

-Abolishes the Obamacare tax on retiree prescription drug coverage. This is a $2 billion tax cut.

As a presidential candidate in 2008, Barack Obama had promised repeatedly that he would not raise any tax on any American earning less than $250,000 per year. He broke the promise when he signed Obamacare. With the passage of the House GOP bill, tens of millions of middle income Americans will get tax relief from Obamacare’s long list of tax hikes.

As with Obamacare the Senate and Congress are exempt from the bill and have their own healthcare bill which is grossly unfair. I did some research and here is why:

Republicans are attempting to pass the AHCA through a process called “reconciliation.” This process, created by the Congressional Budget Act of 1974, allows the Senate to pass certain bills relating to the federal budget with just a simple majority. There is no need to get 60 votes (and, in this case, some Democratic support) as there is for other legislation.

There are a variety of complex rules governing what matters may and may not be considered through reconciliation.

The problem, as the Committee for a Responsible Federal Budget explains, is that Congress’ own healthcare is governed by the Senate Homeland Security and Government Affairs Committee, and that committee was not sent any reconciliation instructions.

Therefore, if a reconciliation bill makes changes to the way Congress gets its healthcare, it might become subject to a 60-vote threshold, because it addresses a matter that is supposed to be the purview of a committee that doesn’t get to participate in reconciliation this year.

Why would the AHCA need to touch Congress’ healthcare in the first place? Because Obamacare included, at Republican urging, a provision requiring members of Congress and their staffs to buy insurance through the Obamacare exchanges.

That Republicans are in this position at all reflects how rushed and ad-hoc their healthcare policy making process has been. They set about passing reconciliation instructions right after taking office because they hoped to repeal Obamacare very quickly. Since they didn’t know what their eventual repeal strategy would be, they didn’t know which committees would ultimately need reconciliation instructions, and now it’s too late for them to change which ones have them. Here’s why Congress exempted itself from the Obamacare replacement bill – AOL

Maybe if healthcare wasn’t so expensive and we didn’t live in a sue-happy society where doctors pay fortunes in liability insurance then premiums wouldn’t be so high. They never should have touched healthcare in the first place and just have something for the people that don’t have healthcare. The reason Obama did it was to gain control over the population with all these strict rules that affect everyone with government control and regulations over us  and now It’s rolled over to the republican side and we have the American Health Care Act. There’s a good chance it won’t pass in the senate. We’ll just have to see how things play out. In the meantime something has to be done or else Obamacare runs out in about one or two years. At least this is a start.

Drama in the House as Obamacare Repeal Passes – GOPUSA