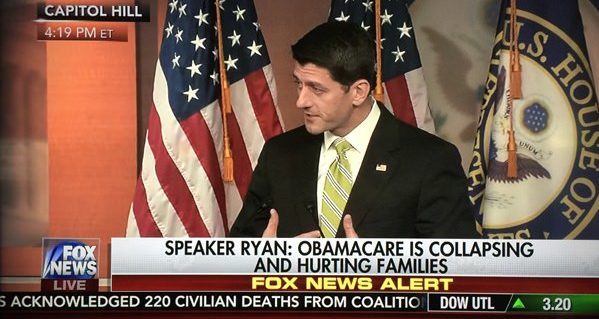 Republicans first attempt to repeal and replace ObamaCare went down in flames before even going to the floor of the House of a vote.

Speaker Ryan: “We need 216 people in the House to agree with each other to pass a piece of legislation.  We didn’t have that.  This is a disappointing day for us.  Doing big things is hard.”

President Trump expressed his annoyance that the Freedom Caucus of conservative Republicans would not get on board with Speaker Ryan’s plan to repeal and replace ObamaCare.  Despite his parading other congressmen as having changed their votes from no to yes after speaking with him the majority of the most conservative congressmen continued to hold out for more.  Charles Krauthammer had suggested last week that Republicans load up the bill with everything that the TEA Party Caucus wanted, but Ryan was determined to push forward the bill as the GOP-e desired.  Whether or not he was duping President Trump to its efficacy is now irrelevant.  The leftwing media will now color this as a Trump failure and Obama victory.

How Washington works is a mystery to most Americans who don’t understand the legislative process any more than they know what the purpose of the three branches of government.  Most also fail to comprehend the degree to which political infighting, deception, and media propaganda rule what the public hears regardless of what is happening in the halls of power.  The Left is waging a war against America, while the Washington elites are waging a war against the people.  Headlines will be spilling out over this event saying a thousand different things about how Trump is a failure, Ryan is a traitor, Obama is great, and liberals are saved, while those paying for ObamaCare continue to suffer the price of giving Democrats power to tax.  The best advice is to believe none of what Democrats say and only half of what Republicans say, and only to believe all of what you dig up for yourself over time.  Media never tells the truth when a story breaks.  It will take a few days for all the facts to come out.  Be patient and don’t fall for the first headline you see.

The worst reaction would be to give power back to Democrats because Republicans failed.  That is what happened after G.W. Bush and the result was jumping out of the frying pan and into the fire.  If Republicans aren’t doing what you elected them to do then get involved in the primary process and find better Republicans.  Democrats are the ones who got us into this mess and they certainly won’t find a solution to get us out to our benefit, only to benefit themselves, which has been the purpose of ObamaCare from the start.  The leftwing media wants Republicans divided and the Freedom Caucus alienated, but Trump says he holds no resentment toward their objections.  President Trump still says it may be best to let ObamaCare implode so that people will be more willing to accept Republican’s replacement.  What that will actually be remains to be seen.

Democrat scams sucking up your wealth for a century

Indoctrination: How the Ignorant are being Overwhelmed with Propaganda