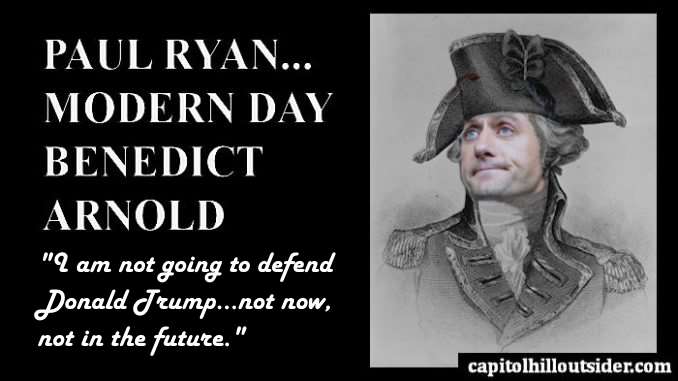 What should be said of Wisconsin’s Paul, the Unwilling: the earnestly mannered, fresh-faced, doe-eyed House Speaker? During his three years in charge, this “policy wonk” spends as frivolously as any progressive—while piously opining about conservatism. For context, when Mr. Ryan became a representative in January of 1999 the U.S. debt was only $5.56 trillion. Given the nation’s deeply underwater finances—that ballooned over his 19-year career (and spanned four U.S. presidents), Ryan’s truly a Republican In Name Only (RINO).

Specifically, he’s the embodiment of incompatible opposites. Mr. Ryan took the top congressional job in October of 2015—while publicly proclaiming he didn’t want it. Likewise was his chilly embrace of then-GOP presidential nominee Donald Trump. As the standard-bearer, the President was never the beneficiary of Mr. Ryan’s largesse: extended to all Democrats. Regarding support of Trump, this highest elected Republican famously said, “I’m not there right now.” Contrast that to Ryan’s sunny treatment of his liberal colleagues in his first speech as the 62nd Speaker of the House:

“But let’s be frank: The House is broken. We are not solving problems. We are adding to them. And I am not interested in laying blame. We are not settling scores. We are wiping the slate clean.”

In retrospect, Mr. Ryan’s loyalty was always to the entrenched Washington establishment (read: the swamp), not to the brash billionaire businessman become president or his populist constituency.

Let’s look briefly at this Speaker’s “report card”. When Mr. Ryan assumed his leadership role on October 29, 2015, the national debt was $18,152,590,112,385.69. Upon his retirement announcement on April 11th, the figure was $21,121,833,941,447.86. That’s an increase of $2.97 trillion in two years and 5 ½ months. Per Gallup, Congress’s approval rating (Nov. 4-8, 2015) was 11%. As Gallup’s figure is not yet available, the RealClear average is currently 13.2%. That’s a meager improvement of 2.2%. Schizophrenically, Mr. Ryan reforms taxes like a Republican while squandering like a spendthrift Democrat. What else explains his rubber-stamping a budget-busting 1.8 trillion dollar spending bill early in his tenure (December 2015), barely averting a government shutdown in March (with another $1.3 trillion in expenditures) while previously passing tax relief (December 2017)? Given his track record and fiscal results, that’s an F.

While Paul Ryan basks, taking his self-congratulatory victory laps—only his myriad failures weakening America will be his legacy.

David L. Hunter is an Associate Editor at “Capitol Hill Outsider.”  He’s on Twitter and blogs at davidlhunter.blogspot.com.  He is published in The Washington Post, The Washington Times, “FrontPage Mag,” and extensively in “Patriot Post,” “Canada Free Press” and “American Thinker