Why Russia’s New Anti-Terrorism Law Is All Wrong 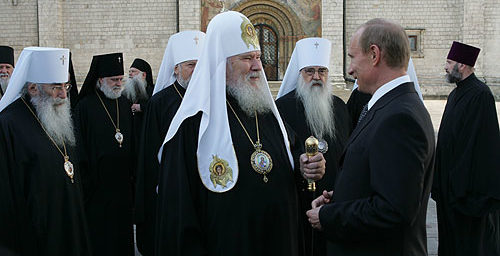 On July 13, 2016, Christianity Today published an article which attempted to defend Russia’s new “anti-terrorism law,” which restricts the evangelistic efforts of missionaries, on the basis of the law being essentially compatible with, and therefore acceptable to, Russian Orthodox Christianity.

Whatever beauty, grandeur, originality, communitarianism, or other excellent qualities inherent in the Orthodox tradition which the author of the article, Andrey Shirin, may have rightly adduced, the existence of these traits does nothing to justify the failure of the Orthodox tradition, and this law, to conceptually grapple with, or to properly protect, the rights of individual conscience and of religion.

Moreover, to attempt to justify this failure by contrasting the abuses which an overemphasis on individualism in the West has led to, is merely to justify Orthodox failure in one area by pointing to Western failure in another area.

It must be admitted that some criticism of Western law is fully justified from a Christian and/or conservative perspective. In the West, individual rights, as presently conceived, harm the collective in some instances in ways which many Christians and/or cultural conservatives find to be intolerable. Nowhere is that more apparent than in the constitutionalized destruction of laws formerly regulating marriage and sexual morals, which has perhaps seen its apotheosis in the constitutionalization of same-sex marriage.

But it is by now a moral certainty that the West is nevertheless correct, in its instinct and in its practice, to protect the conscience of the individual. Since the end of that great conflagration known as World War Two, awareness has grown in the West that the legal protection owed to individuals should be at its strongest in matters affecting the religious conscience, wherein each man, to the best of his or her understanding, wrestles with his response to how he perceives the demands of the Absolute–from which, he or she will obtain the most profound and ultimate meaning of his or her own existence.

When laws such as the new Russian anti-terrorism law favor the adherents of one religion over another by making an outward change in religious profession unduly burdensome, they interfere with the most fundamental of all fundamental processes by which man attempts to become most completely human, and thereby to fulfill his destiny.  Such laws should be unacceptable to the Russian Orthodox Church, and to all people of good will.

The basic argument of Andrey Shirin’s essay is, “that’s just not how we do things over here.” That approach simply ignores the realities of the human conscience and the holiest, most profound aspects of human being and human dignity, and is therefore irremediably flawed.