We waited all day for leading Democrats to claim, “Seventeen Federal intelligence agencies say the Russians hacked the Oscars to manipulate the election” and cite as evidence “Everybody knows Hollywood is Democratic and 97% of the Screen Actors Guild, SAG, members are Democratic party members. This has Steve Bannon’s fingerprints all over it!”

We have also been waiting to see Chris Matthew’s “Hard Balls” guests, as most appear to be on passes from Washington, DC “funny farms,” to come out with accusations President Trump called his best-friend Vladimir Putin to “fix the Oscars so no minority person would win.”

What happened at the Oscars is unprecedented. The Best Picture award had been promised to a “black” picture after the fiasco last year when no black Academy members or films were nominated. Not even one! (gasp!) Can you say, “White Privilege?” All the dance segments had black dancers, and they were excellent, and if you think I am going to say, “They had rhythm,” you are evil. Repent. Meanwhile, back on stage…
Warren Beatty and Faye Dunaway were given the envelope for the “La La Land” leading lady Emma Stone award for Best Actress, which had been awarded.

The producers for “La La Land” were making triumphant speeches when Fred Berger, was speaking. Producer Jordan Horowitz grabbed the mic to say the film had lost to “Moonlight.” No one knows what would have happened if “Moonlight” had not won. Next year the winner will be a film about undocumented “dreamers” who are developing a cure for cancer until they are deported personally by President Donald J. Trump.

Everybody involved appeared to believe the scene was a joke from the moment Warren Beatty, acting flummoxed by having an envelope that read “Emma Stone,” tried to make sense of what had happened, only to have the crowd, and his co-presenter Faye Dunaway, think he was unnecessarily prolonging the announcement for a cheap allusion to the “Bonny And Clyde” ambush scene. Like “We’re shocked to be here!”

Price Waterhouse Coopers, the accounting firm that counts the Oscar ballots, issued a statement taking the blame for the mix-up: “We sincerely apologize to “Moonlight” and “La La Land,” Warren Beatty, Faye Dunaway, and Oscar viewers for the error that was made during the award announcement for Best Picture. The presenters had mistakenly, or by Russian instructions, been given the wrong category envelope and when discovered, was soon awkwardly corrected.

We are currently investigating how this could have happened, and deeply regret that this occurred. We appreciate the grace with which the nominees, the Academy, ABC, and Jimmy Kimmel handled the situation.” Note: We did a little editing there, but this is a swan song CPA style. Next year a black accounting firm will run the show.

It was chaos that has never happened in the 89-year history of the Oscars and it disproved one of the longest-running Oscar urban legends. The Oscars have a procedure for what happens if the wrong name is read, but the present people in charge were either unaware, ripped or bombed.

Only two people know the names of the Oscar winners before the envelopes are opened and read. They’re always two accountants from Price Waterhouse Coopers, PWC, the firm that tabulates Oscar votes, and they carry the results in the famed briefcases that make their way down the red carpet every year proving that even movie people can be cornballs.

PWC’s methods for tabulation are said to be quite rigorous, with lots of double checks and redundancies built into their system designed to make sure the right winner is placed into every envelope. But the firm’s method apparently has no provision for assuring the correct envelope is handed to the presenter. But, how much more movie-magic could we have than for Bonnie and Clyde to screw up given the way they left that 1934 Ford. 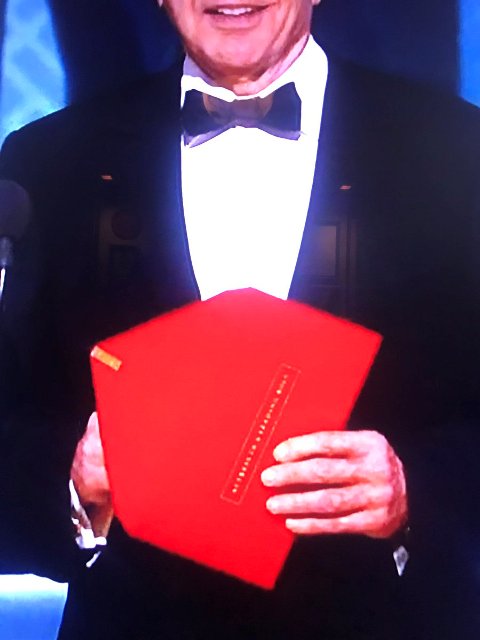