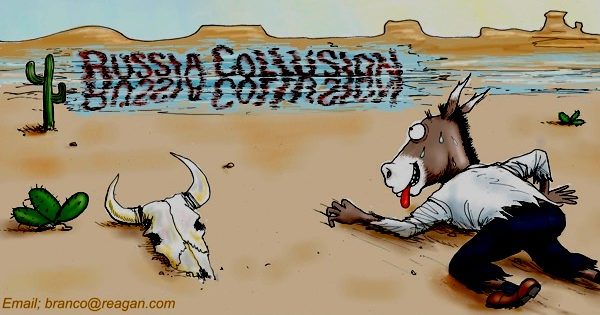 It is utterly amazing Democratic Party leaders cannot see where they are going with this “Russia Delusion Syndrome,” RDS. (Every disease deserves an acronym.) Why would Russia want Donald J. Trump to be President when they were getting everything they wanted from the Obama/Clinton Administration? Surely Hillary would continue for money as she had sold out America to them during her term as Secretary of State.

Together they did not object to Russia walking over Crimea to get a warm water port. That may have been appropriate as Crimea had a plebiscite on it 18 months before Russia rolled in and it passed by 90%, which is suspect and an election Russia could well have manipulated, unlike ours, which they could not. Ukraine was another matter, but again, not a “peep” out of Obama/Clinton!

The port issue will remain critical for Russia even with Crimea as they need two in the north on the Baltic as Russian manufacturing and distribution facilities are in the north, not the south. That can change. They are the people who moved all their manufacturing into the Ural mountains in WWII under the guns of Hitler. They can do anything.

Obama/Clinton pulled all the defensive anti-missile missiles out of Poland as Obama seemingly bowed in his life-long fealty to Communism and no objection came from the lady who claimed she was named after Sir Edmund Hillary even though he was unknown until she was seven years old! She was the only child in the suburbs of Chicago without a name until she was seven. Such are the facts that forged the heroic woman who turned out to be Hillary Rodham. She will ever be a Rodham!

Let us not forget Russian-owned, Canadian incorporated Uranium One, Inc. got 20% of all uranium mined in North America, in perpetuity, not a small town in Illinois, but “forever,” for a mere $145 million contribution to The Clinton Foundation, 90% of which Bill and Hillary keep, plus a 20 minute speech in Moscow by Bill Clinton for another $500,000! These people needed saber rattling Donald Trump like a bear’s nose in the tent or “pubus horribolis,” aka “crabs,” of Moscow hotel fame.

Add to this: Of eight commentators on Russian TV, broadcasting from Washington, DC not one was pro-Trump! All eight were totally in-the-bag for Hillary as carefully documented by northern California orchardist Phil Murphy and no one in major media, to date. The important facts now belong to us. Let us not forget:

The media are now in the hands of the people. Screw you: George Stephanopolis, Jonathan Carl, Jeff Zeleny, Bob Costa, Martha Tears for Hillary Radditz, Chris Up-My-Leg Matthews and all the rest… We have clickers and Hopper hard drives! Fill your hand, hombre!

OK, so you think you are running the “Russia” thing successfully, DNC. You think Mr. Trump owes Russian banks billions so they own him and you can prove it! Mr. Trump is reticent to show in tax returns for previous decades and having owned two corporations I can tell you why: He does not know what is in those hundreds of pages of returns as they are a puzzle, wrapped in regulations, tied together by laws, industry standards, business traditions, English Common Law and more words, words and words.

Plus, where many problems and glitches are resolved on page 90 they first appear on page 18 you may need several days to find the facts pertinent to a single issue in one return! Such is the IRS 78,000 page corporate tax code. Major media will only report the problem on page 18! The whole thing is designed to defeat honest people and one reason the top 1% of earners pay 40% of all income taxes in this “free country!” We built our nation on a free market economy only to be brought down by an army of pencil pushing parasites! And be sure, we have been brought down.

The US tax code creates criminals. It does not resolve matters: We surrender! Been there done that… I too have learned to fight and beaten them back every time, but I had the earn the money I saved a second time! Dare to be in business and examined by a pack of socialists who hate entrepreneurs! That is the problem.

The Robert Mueller III group of 15 lawyers investigating the Russian Connection Issue, RCI, will most likely run into many dead ends if Mr. Trump is honest, which we think he is as no criminal would go into the DC alligator swamp towing tons of bait. When Mueller and Co. run out of questions on Trump and would like to suck up some more Petrossian Cavier at $1,000 the tablespoon in Russia, guess to where they will turn? Can you spell H-i-l-l-a-r-y? The leads are already dangling from the trees of the Czar’s forest, V. Putin, Prop. and Vlad has no love left for Hillary since she lost, “…is not good!”

Mr. Trump is our hope of resolving this matter and taking the strangling of America away from IRS pencil-pushers who could never get a date in high school, all look like Adam Schiff, kick their dogs when they get home and delight in driving honest, successful people nuts. These are your heroes? The only way you can avoid them is to be a failure in life.

That is what the Democratic party is all about: Creating more people who are failures, needy, criminals, confused; all wanting more government. These are people who dream of days when they arrive and we are on our knees screaming, “I am not worthy! I am not worthy!” with tears in our eyes, like for Kim Jong Un. It is every elected Democrats dream, but they have created an engine of self-destruction with their terminal Russian delusion syndrome.