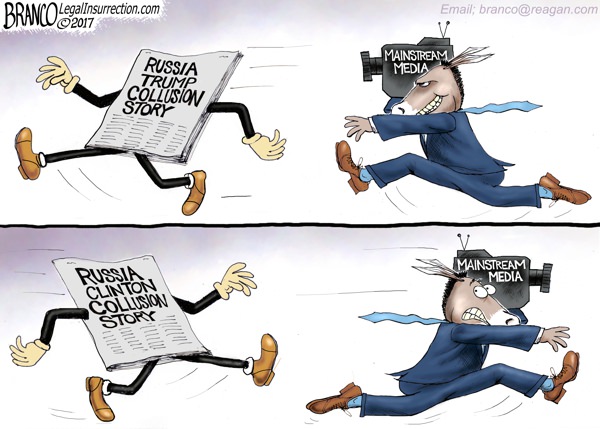 The cover cartoon is from A.F. Branco’s website Comically Incorrect.

The river of corruption coming out of Washington runs wide and deep.  How the Big Lie works; Hillary hires Fusion GPS to get a guy to write a fictional story of Trump hiring Russian prostitutes, sends that story to Buzzfeed who publish it (with the admission that it is unfactual buried deep in the story), allowing the rest of the leftist media to report it and make it a “fact,” and is used by Obama to get a FISA warrant to spy on Trump, and lastly becomes the basis of Trump enlisting Russia to hack the election and steal it from Hillary.  That is how the Big Lie works making fiction become fact.

Liberal media and Trump haters have spent the last year distracting America from the truth about the Russian collusion story.  The truth is now exposed and verified that the Trump collusion story is a fictional creation of the Hillary campaign.  The real story, the real truth, the real crime is that Hillary manufactured the Russian story to smear Trump and Obama violated the law by using it as the basis by which he got a FISA warrant to spy on Trump and his campaign.  In addition, Democrats, liberals, and the media have all been frothing at the mouth for the past year, wasting tens of millions of taxpayer dollars on a fraudulent investigation into Trump, while committing dozens of crimes against Americans in their witch hunt to bring down the president that was righteously elected by Republican voters.  Leftists have proven that they believe they are entitled to lie, cheat, steal, or destroy people in order to secure their power.  The list of Democrat criminals in this river of corruption who promoted these lies to commit these crimes runs wide and deep:

Never any truth to Trump colluding with Russians

Whenever the Left is caught in a lie they will deny, deny, deny, deflect and project, and then they will find posers to make false accusations of the same nature against their opponents.  This is Watergate x1000!  Nixon was driven from office over a tiny fraction of what Democrats have done.  The entire Obama/Clinton cabal deserves prison for this!  Their Never Trump allies deserve to be smacked down and kicked out of the club of righteous Americans for their role in seeking the approval of the Left by smearing Trump.  Pray that American’s eyes are opened, that the light shines on the truth, and that the criminals pay the piper at last.

The 3 Great Frauds of the Left:

If you believe in any of these then you belong to the club of PT Barnum’s suckers born every minute.  If you believe in any two of them then you are lost in the wilderness of liberal darkness.  If you believe in all three then you fall into the Lincoln category of some of the people who can be fooled all the time.  If we can’t have these people prosecuted for their crimes we can at least make sure that they are voted out of power and cast down from on high to wallow in the pit with their lord!  These kinds of deception, these kinds of dupes, and these kinds of denials are why the Left must be defeated and not followed.  These people have no right to lead when all they do is swindle the people to make themselves wealthy.  Democrats are so dysfunctional that they wanted Don Trump, Jr. to be prosecuted for treason for talking to a lawyer from Russia, but hold Hillary sacrosanct for her crimes, bribery, slander, and selling America’s uranium to the nation’s enemies.