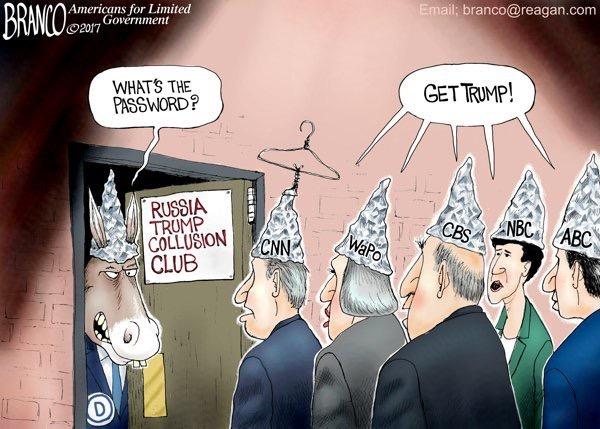 Democrats claiming that Trump colluded with the Russians to somehow steal the election are going to come up as empty, impotent, and frustrated as Republicans that contested Obama’s American citizenship.

Many believed that where Obama was born would disqualify him for office, but the fact that his mother was an American citizen made the question moot.  Where Obama was born was not his problem, but where and how he was raised.  He grew up in Indonesia as a Moslem where he learned to hate America.  That is why he believed it was right to make Americans guilty of crimes against the world, rather than recognize America as being the world’s savior, giving him license to diminish this nation.

The story that Trump colluded with Russians to steal the election from Hillary was born on Election Day.  Despite all the testimony in their search for evidence that this did not happen and could not be done by hacking voting machines, or that WikiLeaks changed people’s minds, one third of people still believe it did.  This is the problem of liberal psychology in always blaming others for problems they cause for themselves.  They disregard the fact that Obama’s anti-American agenda during his tenure resulted in Democrats being voted out of office throughout the nation.  Two-thirds of Americans are sick to death of the Russian collusion story.  They’ve come to know that it’s all a fiction created by the Democrats and their media for the purpose of delegitimizing the Trump presidency and cover up their own crimes.  What this means, though, is that one of three fools still believe this fabrication and they are willing to lead an insurrection against America’s rightfully elected government in the delusion belief they are resisting an imposed tyranny.

The only crimes that were committed during the Trump campaign, election, and administration have all been committed by Democrats spying, leaking, and what not!  Special Prosecutor Mueller, whom liberals say is above reproach, is violating the 4th Amendment to try to find some dirt on Trump &Co and using taxpayer money to do it!  For Mueller to investigate what is already known to be a fraud and is using it to commit a crime against Americans is the pinnacle of leftist betrayal.  He is not trying to find the felonious leakers or uncover Obama’s spies, but trying to find anything with which to damn Trump.  This needs to be ended.

Obama and the DNC are going to keep up this farce until they can be certain their crimes will not come back to haunt them.  This is the basic tactical strategy that “offense is the best defense.”  An opponent cannot counter-attack if he keep him rocked back on his heels.  This is a distraction to keep the attention of the people off of the crimes of the Democrats.

Liberals try to impose their reality on the rest of the nation.  In their insane fantasy they are the French Resistance and Trump is the Nazi Occupation.  They not only don’t believe Trump should legitimately be president, but believe he has seized power and established a dictatorship.  They believe this gives them the right to obstruct, lie, riot, and even kill.  But they are not the resistance fighting an illegitimate conqueror.  They are insurrectionists fighting the rightfully elected government in support of their own tyranny.  How psychotic are they that they voted for a dictator in Obama who attempted to establish his tyranny but then oppose Trump who received the endorsement of most states!  Barack Hussein Obama, a communist who was raised a Moslem in a foreign land where he was taught to hate America, should never have been elected president.  As president he didn’t represent Americans.  He represented foreigners, America haters, even America’s enemies seeking to fundamentally transform and undo American greatness and end American Exceptionalism.  Are Democrats traitorous or are they psychotic?  This evidence reveals not insane people, but duplicitous people seeking to dupe the ignorant into believing their malevolence is benevolent.  Their creation of a fictional conspiracy has been brought into the light and they are quivering in fear that that light will next shine on their crimes.

No Common Ground between Republicans and Democrats

Proof of Trump-Russia Collusion as Liberals Demand a Unicorn Hunt