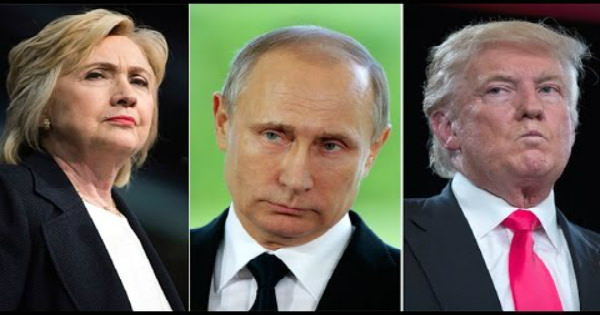 Let’s get one thing straight. Vladimir Putin with the force of Russia had NOTHING to do with this past presidential election victory in the U.S.

This latest retarded idea and charge claiming that the Russians were able to hack into our government political and election systems to pull out and expose Hillary’s government classified emails and then release them to the public in order to make her look bad which would put Donald Trump into office is not only ridiculous but is is just plain stupid.

Of course, this is what the Communist Party Democrats, led by George Soros, are counting on, America being stupid, so as to not be able to think clearly, but simply giving in to whatever happens without challenging it or standing firm against it.

In other words, George Soros arrogantly thinks that we are so unpatriotic and such slaves to a government-backed immoral life style, that he can manipulate America to fall in line for whatever he thinks up. So far that has worked. Until now.

What DID put Trump in office were the millions of evangelicals who had not voted in years but knew that we were about to lose America altogether, as Hillary was set to carry Obama’s goal to the finish line.

Evangelicals knew that the results would finish our country and way of life with our country becoming a Communist dictatorship with all of us living behind barbed wire. Christians came out in droves after praying fervently for God to give our nation one more chance to repent and come back to God. Otherwise it would all be over. God heard those prayers. Make no mistake about it.

The totally leftist controlled ‘main stream media’ had, and still are, aiding and abetting this agenda and filled their news with lies about Trump, innuendos and unsubstantiated insinuations while regurgitating over and over that Trump is a racist, anti-women and not fair to his employees, none of which is true. This is why the “mainstream media” has become classified as purveyors of fake news.

The head of the FBI has refused to seek charges against Hillary for letting those classified emails be seen by our enemies. The CIA Director is proclaiming that yes, it was Vladimir Putin and Russia who hacked into our system—now get this—to sway the election and the election results should be cancelled and Hillary put in the Oval Office.

And while making these charges against Mr. Trump, they quoted only unnamed ‘sources.’ Nothing to substantiate what they were putting out to the public.

This is why Donald Trump says that he intends to drain the swamp of D.C. Perhaps he should also flush the toilet.

Strangely, when Hillary, with the help of Soros, managed to find a video tape made decades ago following a television program, without Trump’s knowledge, he was heard shooting the breeze with Billy Bush using vulgar references to sex and women, Soros had that widely released to the world for the precise goal of sabotaging Trump’s campaign in favor of Hillary.  Yet, not one word was published about that tactic as being inappropriate or charges of trying to manipulate an election.

Yet it was OK for Hillary to release top secret information to our enemies damaging our security. This is a double standard that is going to change. And it was Wikileaks that released her email information to the public, not Russia.

Trump’s victory was totally unexpected. Christians had kept quiet about voting for Trump due to the severe threats and intimidation’s coming from the left. Hillary’s win was so decided that victory celebrations had already been arranged. Newsweek magazine had released their election issue two days before the election with her cover-photo titled, “Madam President.”

It was the sheer number of disenfranchised Christians who came out of the shadows, where they had been forced, and kept quiet about who they would vote for because of the tremendous intimidation they would face. And THIS is what brought about the victory of President Elect Donald Trump. Millions of evangelicals who voted properly. Not the yarn about Russia aiding Donald Trump.

There are 10,535 pages of Obamacare condensed to 4 simple sentences:

1.) In order to insure the uninsured, we first have to uninsure the insured.

2.) Next we require the newly uninsured to be re-insured.

3.) To re-insure the newly uninsured, they are required to pay extra charges to be re-insured.

This dear readers, is called “redistribution of wealth” or by its more common name, SOCIALISM, or “PROGRESSIVE-ISM,” the politically correct names for COMMUNISM Comrade!

A Notre Dame University engineer figured this out. We are grateful to our anonymous minister friend who alerted us to these facts.