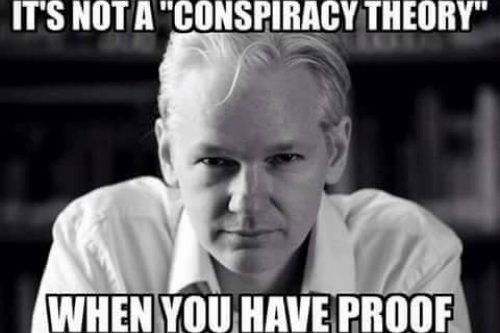 All these things keep banging around in my head, so I thought I might put them down in writing. There’s a lot of talk going around these days about conspiracy theories, but there is one, in particular, I want to talk about and that’s the Trump/Russia/collusion conspiracy theory. First, though, I want to examine the term a little bit. It was first coined by the CIA in the 60’s during the UFO kerfuffle to make for an easy debunking of ideas and questions that ran counter to the official narrative. It has been wildly successful over the years. To call someone a conspiracy theorist is to immediately paint them in people’s minds as tin-foil hat wearing kooks that don’t deserve being paid attention to.

Some say the Trump/Russia/collusion conspiracy theory started with the alleged hack of the DNC server that exposed how the Clinton campaign and the DNC conspired to steal the nomination away from Uncle Bernie. The ensuing scandal caused then DNC Chairman Debbie Wasserman-Schultz to step down from her position. She was replaced by Donna Brazile, who became notorious for using her position as a CNN contributor to leak debate questions to HRC. At first, the DNC tried to sit on the situation, but finally called in the FBI, but refused to release their servers to them, instead calling in a private firm, Crowd Strike (which has deep Clinton ties). Crowd strike took a “photograph” of the hard drive and gave that to the FBI, but according to IT specialists, there are problems with that image being examined as it does not support certain operations. Those servers are now allegedly wiped. The Dems immediately started screaming Russians, and when Trump made a joke about the breech during a campaign rally they started screaming that Trump had the Russians do it.

Meanwhile, however, Bill Binney, a former top NSA IT guy a a team of other former NSA IT specialists forensically examined the meta-data from the released documents themselves. The meta-data revealed two telling things. One, that the data was downloaded at EST, which would indicate tht it was more or less local. The other was that the download speed was ot a rate that could only have occurred using a device such as a thumb drive. In other words, it was not a remote hack at all, but rather an insider leak. Many believe that it was done by Seth Rich, the murdered former DNC employee and Bernie supporter who was disgruntled by what had happened to his candidate. One of those with that belief that claims he has proof is Kim Dotcom.

The other data breach that the Dems suffered was the John Podesta (HRC’s campaign manager’s) e-mails. https://wikileaks.org/podesta-emails/. These were obtained, allegedly, by a phishing scam that obtained Podesta’s password, which brilliantly enough, was “password.” The phishing scam was officially blamed on an entity called Guccifer 2.0, but there are many who believe that that entity was a cut-out for a U.S. Alphabet agency. Check out the Wikileaks Vault 7 release (https://wikileaks.org/ciav7p1/)

Some of the theorists point to George Papadopoulos, a minor Trump volunteer campaign aide for foreign policy as the main starting point, but here’s the rub on Papadopoulos. He was fed rumors about Russian dirt on HRC by one Joseph Mifsud, a known FBI asset who has since completely and totally gone off the grid. He was invited to England and paid to give a speech by a Professor Stefan Halper. Remember this name. It will be very important later. While there he ran into Alexander Downer, an Australian ambassador, in a pub, and over drinks was questioned by Downer and Papadopolulos repeated what he had heard. Downer immediately reported this beer babble to authorities there who passed it on to U.S. authorities by non-regular channels. The problem here is, though, that the dirt that was being discussed was not Hillary’s e-mails, but rather a dossier that the Russians had supposedly compiled on her.

Then there’s the Carter Page element. Page was also a minor aide on the Trump campaign team. Page is the one that was focused on to obtain the FISA warrant. He was chosen, most likely, because of his known Russian contacts, including a speech in Russia. What is little known, though, is that he was a cooperating asset in an FBI probe earlier that actually busted some Russians. The whole Page thing seems a little out of kilter as he has neither been indicted or arrested on any charges. As he was an FBI asset in the past, he very well could have been a plant in the Trump campaign, as he would have been an easy hook to hang the FISA warrant on. It has been discovered that there were indeed plants in the campaign.

Also, there’s the infamous Trump Tower meeting that was attended by Don Jr. and Paul Manafort. There were several things that are very squirrelly about the meeting, mostly surrounding the major Russian player Natalia Veselnitskaya. I did a short piece on her here: https://ipatriot.com/russian-lawyer-back-in-the-news/)/. Veselnitskaya was persona non grata in the U.S. but somehow received a special visa to come in. Somebody in the State Dept. has got some “splainin” to do. Odd fact number two. Both right before, and right after the Trump Tower meeting. She met with Glenn Simpson of Fusion GPS which she had reportedly hired to help her in lobbying against the Magnitsky Act, which is what she actually spoke about at the Trump Tower meeting, not dirt on HRC. Fusion GPS is also the firm that had hired ex-British spy Christopher Steele, composer of the “unverified and salacious” “pee paper” on Trump compiled of Russian propaganda and disinformation and paid for by the DNC and the Clinton campaign. Fusion GPS had also hired Nellie Ohr, wife of Bruce Ohr, the #4 man at the Dept. of Justice to help with the opposition research. Bruce Ohr is scheduled to be deposed by Congress later today. Personal note: I had put down all these points that had been rattling around in my brain to see if I could bring any order to them when Sara Carter released this article: https://saraacarter.com/breaking-bruce-ohr-texts-emails-reveal-steeles-deep-ties-to-obama-doj-fbi/. I almost decided not to write it, but decided, “what the heck!”

Other of the conspiracy theorists are jumping with joy at the Paul Manafort convictions. Manafort was Trump’s campaign manager for approximately three months in 2016. Trump did not pick Manafort, but had him foisted off on him by the RNC. There is no proof yet, but many suspect that he was another intelligence plant in the campaign. The convictions on Manafort were from 2004-5 and were for tax evasion, bank fraud and failure to register as a foreign agent. None of these had any connection to Donald Trump and occurred well before they met. No Trump, no Russia, no collusion. The closest Manafort came was some work he did for a Ukrainian politician (Ukraine is NOT Russia! Just ask them!), and his involvement with Russian “oligarch” OLEG DERIPASKA. That’s a name that is popping up all over the place with all sort of ties to a lot of different folks. He needs a piece written all about himself, but I’m not doing that here, but I will make one interesting note. The FBI had asked Deriposka to spend several million to help them locate a missing agent. The agent was never found. Manafort also formerly worked with John Podesta and his brother Tony at the Podesta Group, which has since been dismantled.

I said earlier to remember the name Stefan Halper. Halper is a known asset for both the FBI and the CIA, and for this caper he was paid through the Pentagon, paid over one million dollars. Through his professorship as a security specialist in England, he has some very deep ties to Russian intelligence. At one of the conferences he gave, he invited Michael Flynn and also invited a female Russian and then began spreading dirt about their relationship. I have borrowed sketchily from Sara Carter’s verbal report on her new blockbuster article given on last nights Hannity. I sure I could have learned more, but you know Hannity. He kept interrupting her. I’m posting the link here and then I’m going to go read it myself. https://saraacarter.com/whistleblower-exposes-key-player-in-fbi-russia-probe-it-was-all-a-set-up/.

Very few references were given in this piece because, as I said earlier, 99% of this was stuff that was just floating around in my head that I thought maybe it would connect better if I wrote it out. This conspiracy theory is gigantic and has many, many moving parts. Someone else that has been doing fantastic work is John Solomon of The Hill. Here are links to two great pieces he did that The Hill buried in the opinion section: https://www.thegatewaypundit.com/2018/08/john-solomon-bombshell-bruce-ohr-discussed-getting-steele-back-into-fbi-and-mueller-probe-in-july-of-2017/