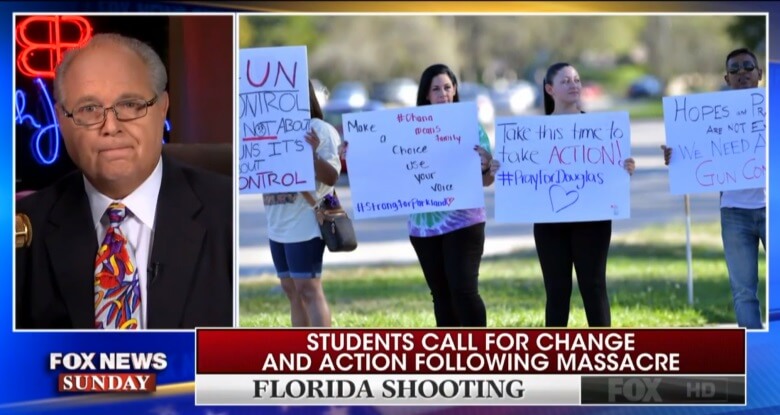 Modern day Cicero, Rush Limbaugh, was on Chris Wallace’s Sunday news show to explain the deeply flawed thinking and deliberate deceptions of leftists and how the Democrats are warping the conversation to blame everyone else for the problems that liberal socialist ideology has created.

Wallace questioned Rush about the Parkland school shooting, the Trump Russian investigation, and the immigration problem in Congress, and his answers were all the very epitome of righteous, rational, moral thought.  When it came to the multiple mass shootings and murders that have taken place in the United States in the last ten years Wallace asked Rush if current gun laws are “sensible?”

“My point is that’s not the problem.  If you ban the AR-15 they’re gonna find something.  Most of these are handguns anyway.  If you ban that they’re gonna find some other way to do this.  Until we stop them, until we affix blame where it belongs, until we are ready to admit that this is what our country has become, we can’t go back to the 50s of Ozzie and Harriett and wish it weren’t so.  And we can’t shout to the skies ‘ban the guns.’”

Rush pointed out that this guy was known to the FBI well before his rampage.  Most all of these perpetrators were known to the FBI beforehand beginning with Major Hassan the Fort Hood shooter.  At the beginning of the Obama regime he was known to be radicalizing on Islamic jihadi Internet sites before his murder spree, but the FBI was told to back off of him for being a devout Muslim.  This is the Democrat’s FBI that has dropped the ball on over a dozen of these mass murderers all of whom were known to them before they launched their attacks.  Was it done deliberately by Democrat operatives in the FBI who are more invested in smearing Republicans than in protecting the people?  From all evidence that appears to be the case.  There are more FBI agents investigating the phony Russian collusion story, Mueller’s obstruction witch-hunt, and any possible domestic or sexual misconduct inside the Trump administration than are working to stop these mass murderers.  The Left is busy blaming everything and everyone but the shooter!  They blame guns, the NRA, ROTC, the military, Christians, conservatives, Republicans, the Right, and America!  Surprisingly they haven’t yet blamed God, but then God and morality is what they have demanded be removed from our culture.  They deny morality and declare that each person makes their own morality because, as they believe, we are just evolved from apes, and then they act surprised when their children behave like animals!  To Rush’s point, it doesn’t require a semi-automatic rifle to commit mass murder.  Most are done with handguns that have stricter laws on them because they are easily concealed.  Some were done with trucks, some with pressure cookers and other bombs, but all have a common thread – they are all committed by leftists!  They are all committed by anti-Christian, anti-American haters who are either psychotic or driven to rage by their ideology of social justice lies or Islamic jihadi radicalism.  The root cause of all these mass murders is found in the ideology of the Left.  There are no TEA Party conservative Christians committing these heinous acts of mass murdering the innocent.  Only socialists, Islamists, and psychotics do that!  And it is they and their lying media who are blaming everyone else for the evil they have fostered in America and around the world.  There are no problems with America’s laws or the guns people own.  The problem is in the government that in the last few years has been allowing terrorists to run rampant in America because Democrats have an agenda against Americans.  Lift the wool from the people’s eyes and take action against the true evil in America.  Expose the Left, expose the Democrats, and expose the ideology of lies and hate and greed that they breed.

Democrat Liberalism is the Root Cause of Mass Murders