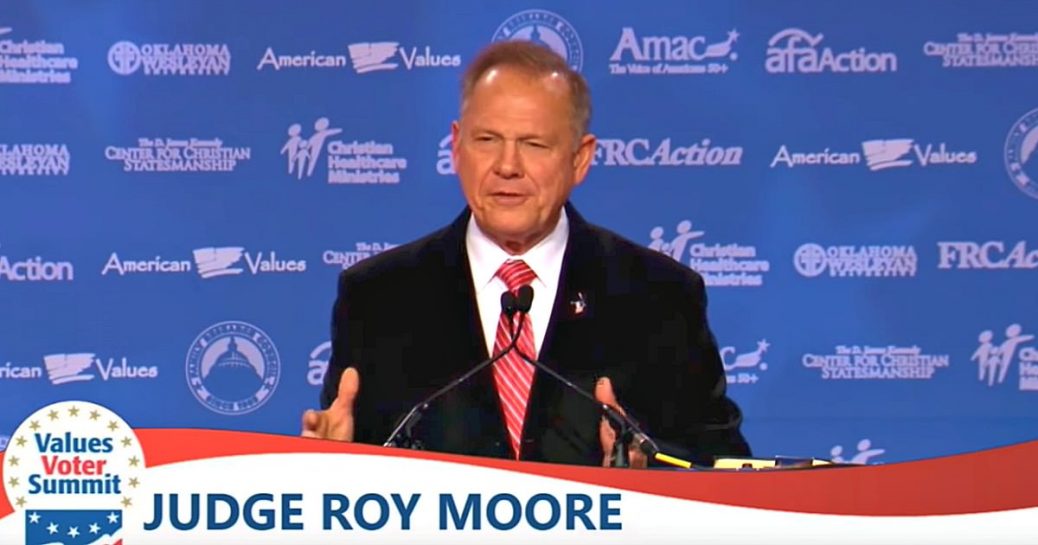 Did Alabama Senate candidate, Republican Roy Moore do it or not? Did he do what the woman, Leigh Corfman, accused him of doing some 38 years ago? Is he guilty of sexual misconduct with a minor or not?

Well, I don’t know, and neither does anyone else, save for Moore and Corfman.

But reading Corfman’s account of the events struck me as odd, as did the timing.

The girl says that Moore met her and her mother on a bench outside a courtroom one day in 1979 – a mere 38 years ago.

“He struck up a conversation, Corfman and her mother say, and offered to watch the girl while her mother went inside for a child custody hearing,” writes the Washington Post. “He said, ‘Oh, you don’t want her to go in there and hear all that. I’ll stay out here with her,’ ” says Corfman’s mother, Nancy Wells, 71. “I thought, how nice for him to want to take care of my little girl.”

A man that neither of them knows strikes up a conversation with Leigh and her mother outside a courtroom, offers to watch the daughter and the mother thinks nothing of it? I’m sorry, but even in 1979 this seems a little strange, not to mention the detail of what was said almost 40 years later.

The timing of the accusation also strikes me and many others as odd. Why did she choose now to suddenly come forward, just one month before the Senate special election?

Some would say that all the other recent accusations of sexual assault has given her the courage to finally come forward and that this election is just too important to risk on an abuser. The spotlight is shining bright on this Senate race and has garnered much national attention.

But it’s not as if Judge Moore hasn’t been in the national spotlight for years now. He was removed from his position as Chief Justice of the Alabama Supreme Court, in November 2003 by the Alabama Court of the Judiciary for refusing to remove a monument of the Ten Commandments commissioned by him from the Alabama Judicial Building, despite orders to do so.

Unless you’ve been living under a rock, you know about Roy Moore.

But none of these oddities seem to matter to the press or the Republicans, who specialize in throwing their own overboard at the slightest hint of controversy or even accusation. This seems to be all it takes for them. And as predictable as the rising Sun, Republicans have done just that.

They have cut ties with Moore, including all funding, without him ever getting a chance to even mount a defense. For the political class it is all and only about the optics. Right and wrong do not exist.

But, as we’ve witnessed lately, a lot of the accusations appear to be true, or have a basis in truth. This doesn’t mean they all are. However you’d never know by the reaction of most.

Even Glenn Beck, who I’ve always thought to be thoughtful and reasonable, said on his nationally broadcast radio program, that he believes Roy Moore did what he did. How dangerous is that? How the crap does he know this? On what is he basing his conclusion?

This, among others, like the knowingly spurious charge by Harry Reid during the 2012 presidential election, sets a very dangerous precedent – a precedent of the Communist model of guilty until proven innocent – a precedent of it’s not the nature of the evidence, but the seriousness of the charge.

Recall that Harry Reid lied about Mitt Romney’s taxes. Reid said he heard that Mitt hadn’t paid his taxes in 10 years. Reid cited no sources, yet it was enough for the press to hound Mitt mercilessly.

After Romney lost to Obama, Reid simply said that it worked – we won.

I want to reiterate that none of us knows who is telling the truth, but this doesn’t matter. If Moore doesn’t pull out of the race,  he may lose to the democrat.

Then we watch to see if “justice” is still pursued by Leigh Corfman, or if the case evaporates as mysteriously as it surfaced. Then we will know the real truth.