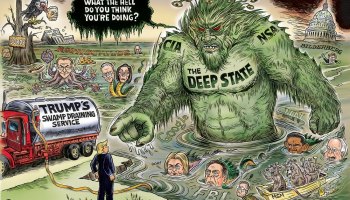 America has seen in the last few years what everyone said could never happen here in the greatest nation of liberty in history – the rise of Hitlerian fascism.  Barack Obama stood in front of cameras yesterday and predicted that President Trump would conduct a genocide ten times worse than Hitler.  Antifa has attacked right-wingers on college campuses, Black Lives Matter has rioted in the streets, Islamists have condemned Americans as bigots, and Democrats have accused Trump of being a tyrant and his voters of being hateful racists.

After listening to Prof. Dershowitz, who is always speaking of righteousness and justice, with what we see being done by liberals, leftists, and Democrats in America today, one must wonder why he is a lifelong Democrat.  Obama’s prediction about a Trump genocide has as much truth behind it as Al Gore’s prediction in 2006 that the oceans would rise 25 feet by 2020 because of man-made global warming.  It would take a thick book to completely examine all the proof that the Left is the heart and soul of fascist totalitarian tyranny, how they are behaving exactly like Hitler’s Brown Shirts claiming they represent freedom and Americanism against an evil race of white patriots by promoting violence, assassinations of police and politicians, assaulting and killing Republicans, and advancing the causes of criminals, terrorists, and wannabe dictators.  Want to talk about the genocide of 20th century socialists and how their legacy can carry over into the 21st century in free America?  Let’s talk about 50,000,000 dead babies killed by Democrat’s legalized abortion, a figure that would challenge and make Hitler, Stalin, and Mao proud.  Their combined total is estimated at something over 100 million though is probably closer to 200 million, but liberal fascist Democrats are on a track to surpass them.

The Proof of Leftist Fascism

Antifa says they are freedom fighters against fascism.  They attack any Republican, conservative, or Christian speaker, not with words, but with violence.  Then they claim to be the victims.  This is right out of Hitler’s playbook, Mein Kampf, on how to overthrow a government and take control of the people.  Their tactics of violence, blame, victimhood, insurgency, stealth, deceit, and subterfuge all come from the teachings of history’s worst tyrants and dictators from Muhammad’s Koran to Marx’s Communist Manifesto down to Saul Alinsky’s Rules for Radicals, all instruction manuals on how to conquer righteous peoples.  The people who dedicate their lives to the hatred of God the Father of Christ is the history of violence and hate in the world.  Before you bring up the crimes of the Catholic Church in the Middle Ages and try to blame Christians, read this:

Niccolò Machiavelli’s work, The Prince, is reviled by the Left because it is an instruction manual on how to guard against the subterfuges and machinations of those who would undermine and overthrow rightful rulers.  Likewise reviled in America are Presidents Eisenhower who unleashed McCarthy on them and Ronald Reagan who pushed back their march to socialism.  Now Donald Trump stands in their way of crushing America, crushing Christianity, and crushing Europeans as “white supremacists dominating the ‘brown people’ of the world.”  Theirs is nothing more than racism and bigotry from the opposite side.  To know when people are embracing evil all you need to do is look back at their history.  Democrats demanded slavery be put in the Constitution while Republicans fought a war to abolish it.  Democrats conducted segregation and oppression while Republicans fought for civil rights.  Democrats duped and re-enslaved the descendants of their former slaves to government welfare and drugs while Republicans were blamed.  Democrats promoted Stalin, Hitler, Mao, and banana republic dictators like Castro in the 20th century, then endorsed more like Chavez in the 21st.  They make deals with Iran and North Korea who both threaten the world with nuclear war, and aid the Islamo-Nazis of the Muslim Brotherhood, the same people who allied with Hitler in WWII, to overthrow the secular governments keeping them in check and help them re-establish the Caliphate that warred and enslaved Europeans, Asians, and Africans until they were crushed by the United States.  Democrats fight for criminals to assassinate police and wage war on our streets against innocent, law-abiding citizens.  They laud sexual predators and enable them to molest women – until it becomes expedient to throw a few of their losers under the bus to try to make themselves appear righteous so they can smear Trump & Co. as degenerates.

The rise of fascism in America is Antifa Nazis pretending to be fighting fascism while they commit it, with BLM assassinating police claiming they are murdering racists of the KKK, and conducting persecutions from the Department of Justice being manipulated by the Swamp Rats of the RINOs working with Democrats to overthrow the outsider Trump.  Donald Trump is a Reagan Christian conservative through and through who isn’t afraid to get in the mud with the Left and fight dirty.  As they say, good guys finish last because they fight fair.  You cannot defeat evil by engaging them under their rules of what is fair for you and fair for them.  The weapons of war used by both sides are the same as are the words and deceptions used in politics.  What is the most important is the cause for which they fight.  Democrats say that Republicans are fighting for racism, but history proves it has always been Democrats who fight for racism and Republicans who fight for liberty.  That has not changed.  What has changed is the ignorance of American youth who are easily duped by the deceptions of the Left.  They do not listen to FOX News or Rush Limbaugh because they are told that those people lie.  The mistake they so commonly make is letting other people tell them what to think.  Always listen to both sides!  Nothing reveals the truth and righteousness as well as hearing truth and lies told side by side.  That’s why President Trump uses Twitter to bypass the leftist media, to bypass their lies and distortions, and to overcome their censorship of the truth.

Everyone has known from the very start of the Russia investigation that it was a lie based on a fraud to perpetrate a deception.  Even Obama said during the campaign that it was impossible for Russia to affect the outcome of the election.  Now it suits their purposes to promote a lie, a lie they now believe so deeply that they have deluded themselves into believing it is truth proving Hitler’s Big Lie once again that – if you tell a lie big enough often enough it eventually becomes the truth.  The proof of fraud in this investigation is that it is being conducted by the political enemies of Republicans.  There is no crime being investigated and there are no charges of conspiracy or collusion being brought against anyone.  There are only violations of the 4th Amendments rights of everyone involved, and an effort to coerce and crush all Trump supporters in order to create a charge of Obstruction of Justice.  This would then be used by Democrats to impeach Trump should they regain control of Congress.  The problems with this scenario are; one, it would require assistance from RINO Swamp Rats for Democrats to regain Congress, two, it would entail entrapment by creating crimes for a fraudulent investigation into a fairy tale, and three, it would necessitate completely duping ignorant people into believing Democrat lies.

President Trump needs to take a lesson from The Prince in how to take charge over the liars, deceivers, and propagandists of the Left and crush their hopes and dreams of overthrowing the Constitution.  They must not be permitted to dupe ignorant fools into believing it is he who is the tyrant when it is they who are the subversives to his rightful election.  The duly elected President of the United States, even when Democrats stupidly elected a foreign bred Moslem, is sacrosanct, and no fantasy of the Left should be permitted to overturn the election of the man selected by the people, especially because he would lead the nation away from their attempt to fundamentally transform this great nation into their socialist banana republic toilet.  That is not the American Dream.

The time for action has come, Mr. President!  Shut them down and open investigations into Mueller for persecution, Hillary for destroying evidence, and Obama for illegally spying on the Trump campaign with a fraudulent FISA warrant.  This farce has gone on long enough and it is nothing more than the swamp’s campaign to eject this upstart who jumped into their sandbox.  Donald Trump is fulfilling the agenda that conservatives have been demanding since Reagan and every lying NeverTrumper who claims to be conservative, every swamp rat who claims to be Republican, and every leftist who claims to fight for freedom are the people who cannot be reasoned with because all they want is dictatorial power for themselves.  Washington, D.C. should never have become the richest region in the country because it can only do so by stealing wealth from the people as all socialist dictators do.