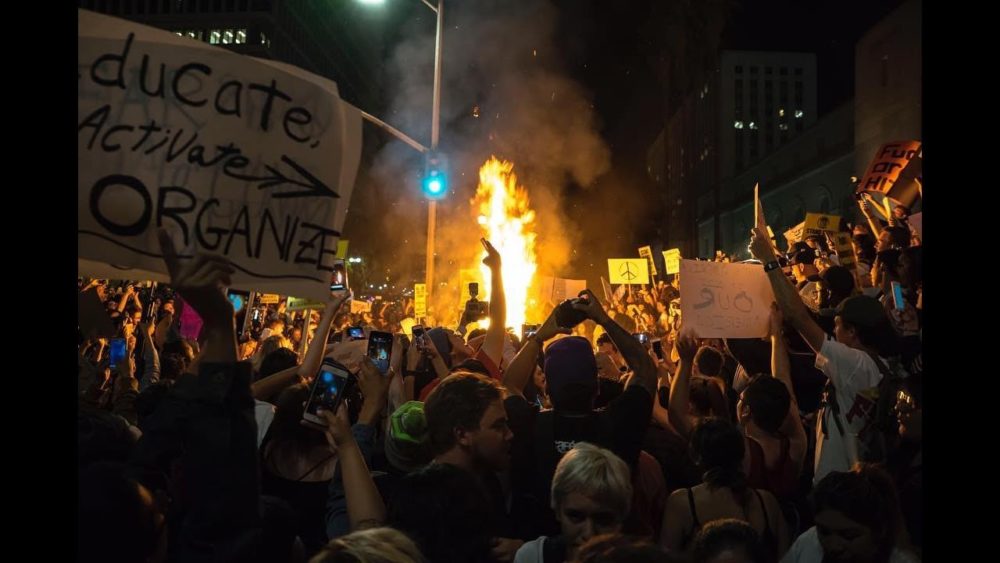 It was very disturbing to watch the damage and disrespect on display at the very place I had peacefully demonstrated against the Vietnam War almost a half century before. At the birthplace of the free speech movement, a fascist radical left-wing group actively tried to put an end to free speech. These “tolerant” liberal students beat Trump supporters, smashed ATM and bank windows, looted a Starbucks, pepper sprayed innocent bystanders, and set fires in the streets. This is where I demonstrated to end the war, and at the same place heard William F. Buckley speak.

The left that is terrified of anyone who they think might be persuasive and effective. Students seem to think the purpose of higher education is to reinforce the ideas they already have and shut out all contrary voices. “The left is profoundly antithetical to free speech these days, and does not want to hear alternative points of view, and will do anything to shut it down,” Yiannopoulos said. The College Republicans declared, “It is tragic that the birthplace of the Free Speech Movement is also its final resting place.” Ben Shapiro commented, “Only fascist liberals riot. Heck, conservatives don’t even leave any trash behind when they rally! The radical left sees any speech they find offensive as a form of “aggression” to be countered by other aggression.”

The problem is that people are not trying to understand each other. Progressives carefully record every word the administration says, then turn around and give it their own meaning, like going to a country that doesn’t speak English, trying to communicate with a dictionary. “ That must mean that he is a bigot, xenophobe, racist, Nazi, or whatever”. Even if they spoke the same language, they are from a different culture, kind of like Canadians trying to understand Americans. Conservatives hear what the Administration means and does because they understand the culture that Trump speaks from. They speak the same language.

This growing trend across the country wasn’t by accident. The event at U.C. Berkeley received funding from George Soros, the city of Tucson, a major labor union, and several other large financial institutions. What are they trying to accomplish by all this fascist hatred and destruction? Some are even proposing a rebellious take-over of the government or seceding from the US. One can begin to understand how Lincoln and his Republican Party of the 1850s and 60s felt when Democrats were demanding secession in 1860. Let’s hope history doesn’t repeat itself. Beware of #Resist. They carry the confederate flag.