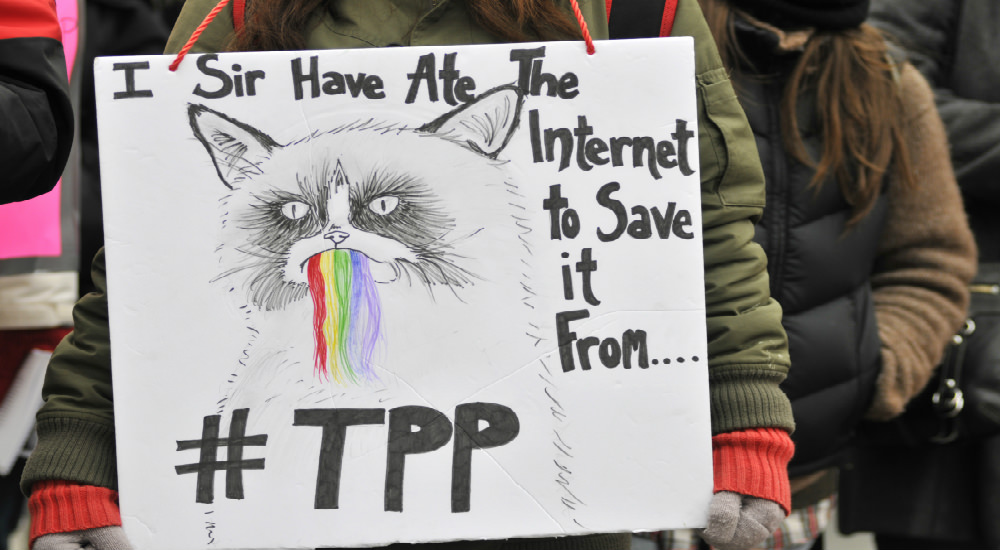 There is not another issue more emblematic and dastardly that furthers the New World Order agenda than total control over global trade. The Trans Pacific Partnership is so secret that the Pelosi rule takes effect. You must approve it before you find out what is in it. So why is there so little outrage from the public about negotiations that are fundamentally already approved in a Bilderberg session? All factions of ideological persuasion that oppose worldwide tyranny have a common interest and imminent need to oppose the TPP.

Compare the viewpoint from the genuine right with that of the honest left.

William F. Jasper writes in the New American, ObamaTrade “Fast Track” Still Alive Despite Senate Smack Down, and has been in the forefront and consistent in denouncing the Corporatocracy of the “Free Trade” hoax.

“The Trade Promotion Authority (TPA) bill, as we have explained in more detail in previous articles (see here and here), is essential for passage of the TPP and TTIP. Virtually all of the pseudo-free trade agreements have depended on the TPA/Fast Track process to rush the complex agreements through Congress on an up-or-down, high-pressure vote, with very little time to examine or debate the text, and with no amendments or filibusters allowed.

The truly bizarre element in the TPA battle is the fervor of the Republican leadership in Congress demanding that their supposed arch-enemy, President Barack Obama, be given TPA powers to ram through, on the Fast Track, the secret TPP/TTIP agreements that he won’t even allow members of Congress full access to. With ObamaTrade, they would be handing him far more power than they did with ObamaCare. Republican Senator Mitch McConnell of Kentucky, the majority leader who has led this strange and destructive effort, sounded like an Obama White House sock puppet after the vote. “This is not a game,” McConnell said after the vote. “This is about trying to accomplish something important for the country that happens to be the president’s No. 1 domestic priority.”

For clarity, watch the video TPP Hands The Keys To Corporate Foreign Powers where Mr. Jaspers makes the case that the TPP is not really about trade agreements, but is a formula for economic partnerships that supersede national sovereignty.

Now compare the sentiment from Julian Assange from the perspective of the Wikileaks disclosures in a Democracy Now interview, entitled,Julian Assange on the Trans-Pacific Partnership: Secretive Deal Isn’t About Trade, But Corporate Control.

“OK, so it’s a—the largest-ever international economic treaty that has ever been negotiated, very considerably larger than NAFTA. It is mostly not about trade. Only five of the 29 chapters are about traditional trade. The others are about regulating the Internet and what Internet—Internet service providers have to collect information. They have to hand it over to companies under certain circumstances. It’s about regulating labor, what labor conditions can be applied, regulating, whether you can favor local industry, regulating the hospital healthcare system, privatization of hospitals. So, essentially, every aspect of the modern economy, even banking services, are in the TPP.

And so, that is erecting and embedding new, ultramodern neoliberal structure in U.S. law and in the laws of the other countries that are participating, and is putting it in a treaty form. And by putting it in a treaty form, that means—with 14 countries involved, means it’s very, very hard to overturn. So if there’s a desire, democratic desire, in the United States to go down a different path—for example, to introduce more public transport—then you can’t easily change the TPP treaty, because you have to go back and get agreement of the other nations involved.”

If you want to view the video, click on the Democracy Now link.

While the emphasis may depart between the conservative and liberal positions, both heartily agree that motivations behind the TPP will drastically promote global consolidation under the guiding hand of monopolists and authoritarians.

The ignorance in the American society about international economics has always been known. What is new-found in an era of induced survival depression is that the productive producers and the social network recipients are so docile in their tolerance for the adoption of total economic tyranny.

Where are the WTO protectors performing their street theater? Or where are the Tea Party activists bombarding their Congressional representatives to forestall another sellout?

The BATR RealPolitik Newsletter, Dems Balk at Trade Deal featured a number of resources on the Fast Track process. National surrender to international governance is a betrayal of all that is worth preserving about our country.

The fight to reject the TPP is a core opportunity to forge an active populist movement against the bipartisan tools who answer to their corporatist masters.

True free enterprise must be able to compete in a practical manner that does not favor crony companies that are part of the NWO cartel of elites.

Living in a media bubble of disinformation requires that a serious national movement against trade agreements that betray our people must be combated with all our energy and commitment.

Approving the TPP will demoralize our will to revitalize an independent and viable domestic economy. The dismal record is clear that previous global trade agreements simply transferred production and wealth to foreign interests.

The barriers between left and right false separations need to be broken down in order to unite to defeat the corporatist plutocrats and globalist fascists from imposing their vision for a neo-feudal system that will reduce the rest of us to serfdom.

Maximum pressure on Congress is the order of the day. Failure to launch a grassroots campaign will result in the demise of America into a third world cesspool. The argument is clear, inaction guarantees perpetual poverty for your prodigy and grandchildren. If you are not willing to fight destructive international trade double-dealing, what exactly is the value of your existence? American must become a serf free economy.