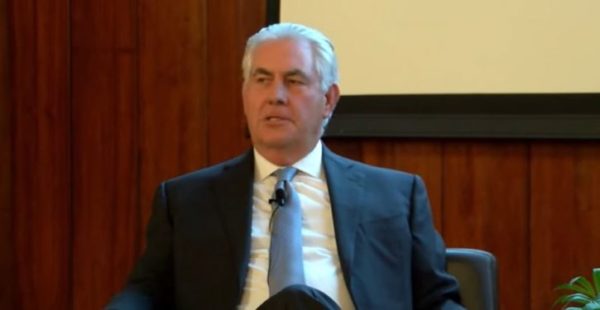 Possibly the most important presidential cabinet position is the Secretary of State. President-Elect Trump’s nominee for the role, former Exxon CEO Rex Tillerson, shares a common denominator with Trump in the fact that Tillerson, like Trump, has little record of policy and had never worked in politics before.

While this may sound refreshing in the fact that Tillerson is a political outsider, as opposed to coming from “the swamp,” any asset comes with liabilities. For example, when Trump was running for the nomination for president, he had very little solid policy to direct to, as if he was learning as he was going along. The asset of his being outside politics resonated with many people, which is one reason people were drawn to him, regardless of this liability of lack of policy awareness.

We may be seeing the same with Tillerson. There is no question that Tillerson was a successful businessman, running one of the largest oil companies, and doing business deals all over the world comes with the territory. However, Tillerson’s business record shows somewhat of an affinity for Russian president and dictator Vladimir Putin. He did much business in Russia, including a 2011 multi-billion-dollar deal with the Rosneft energy company, owned by the Russian government. Putin also awarded him an “Order of Friendship” medal in 2013.

These factors raise many red flags on how Tillerson would conduct state business. There is no question that Russia is trying to become the world’s superpower, invading surrounding countries and propping up the dictatorial Syrian and Iranian regimes. Putin has also been accused of murdering journalists and dissenters, as well as plundering more than $40 billion from his country. Russia is, without question, an enemy of the United States.

During Tillerson’s confirmation hearings yesterday, Florida Senator Marco Rubio asked Tillerson if he would call Putin a war criminal, considering Russia’s actions in Chechnya, Aleppo and Crimea, not to mention the invasion of Georgia in 2008. Tillerson answered that he would not use that term. Rubio proceeded to explain exactly how Putin used his military to destroy Aleppo, and Tillerson, while still refusing to call Putin a war criminal, said he would need to review both public and classified records. Rubio then turned to Putin’s alleged murders of journalists and dissidents, which Tillerson refused to denounce. Tillerson was also grilled on alleged Russian hacking into the US elections, and agreed that Russia did direct the hacking campaign. However, he repeatedly refused to condemn Putin, while acknowledging that little happens in Russia without Putin’s instruction.

There was one silver lining to Tillerson’s hearing, and that is that he condemned the anti-Israel resolution passed at the UN over the Christmas weekend. According to Algemeiner.com, an Israeli news source, Tillerson vowed to make fighting the Boycott, Sanction and Divest (BDS) movement a State Department priority, calling Israel “our most important ally in the region,” and denounced outgoing Secretary of State John Kerry’s speech on Israeli construction “quite troubling.” He was relatively vague about a two-state solution, stating that is “the dream that everyone is in pursuit of…whether it could be a reality remains to be seen,” also saying that he doesn’t believe in coercing the Israelis and the Palestinian Authority to the negotiating table, saying it would not lead to a solution. He also condemned the PA for failing to take “serious actions” to stop violence against Israel.

Tillerson’s answers on Israel, while I disagree with the two-state solution idea, is inarguably better than Kerry’s view, which is to shove it down the throats of the Israelis without condemning the PA and before any negotiation takes place, leaving Israel with no bargaining chips. However, Tillerson is a major wild-card, especially when it comes to the issue of Russia. I cannot support his nomination for Secretary of State, but if he is confirmed, as President Ronald Reagan used to say, “trust but verify.”