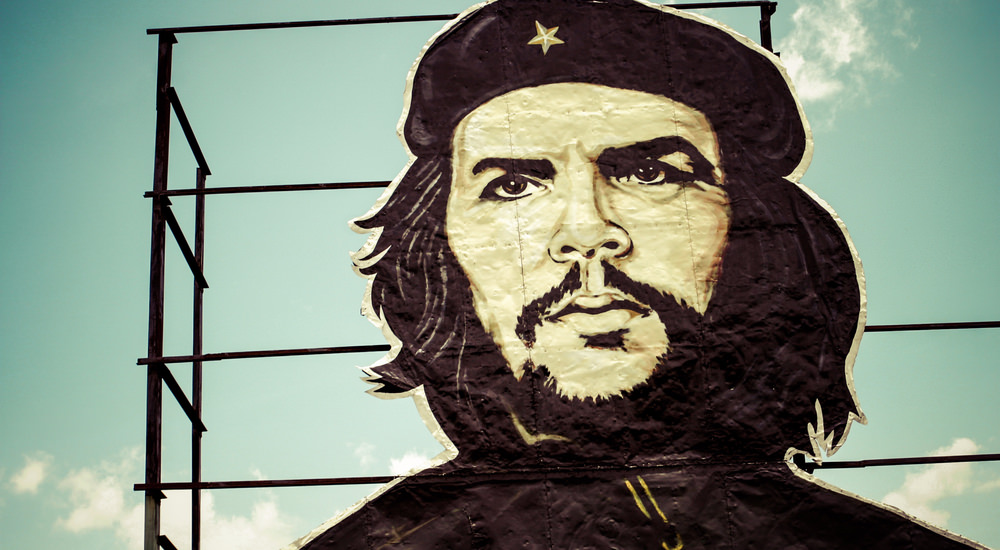 Ernesto “Che” Guevara, was born in Argentina in1928; and was later, along with Fidel and Raul Castro, instrumental in the Cuban Communist Revolution. He died in1967 by execution in Bolivia. Che` was a physician, author, anti-freedom guerrilla commander, and Cuban government official. He was married twice and had a total of five children.

Che`s family had Spanish and Irish roots and were leftist in their political leanings. Che` was very intelligent and became well versed in Marxist ideology. As a young medical student Guevara studied Marxist-Leninism, seeking out leftist-studies in “class-struggle” and international world-revolution. Che` traveled throughout South America and became more radicalized by seeing the extreme poverty, hunger and disease he encountered in his travels. Being young, naive and leaning towards a radical leftist political ideology, Guevara naturally blamed the United States of America as the main cause of South America’s woes. Not, of course, the inept, corrupt nature of many Latin American governments and their economic policies.

Guevara’s travels took him to Mexico City, where he met with Raul and Fidel Castro, joining their “26th of July Movement.” After arriving in Cuba, Che’ quickly rose to second-in-command, in Fidel Castro’s revolution army. He proved to be an inspirational leader and a keen military strategist. As a military commander, Guevara was a harsh disciplinarian who was known to shoot deserters and execute a number of men suspected of being informers, traitors, or spies. One biographer in reading Guevara’s notes and diary accounts noted that Che` had a “remarkable detachment to violence,” referring to an execution as being a “revolutionary parable about redemption through sacrifice.”

Guevara, by his own account, was philosophically and ideologically inspired by Karl Marx. Che’ professed that the Laws of Marxism were present in the events of the Cuban Revolution. When enacting and advocating Cuban policy, Che` cited Marx’s inspiration by saying; “There are truths so evident, so much a part of people’s knowledge, that it is now useless to discuss them…” “Practical revolutionaries simply fulfill laws foreseen by Marx…”

A philosophical dialectical materialist (atheist), Guevara called his special brand of revolutionary hatred — love; “something spiritual that would transcend all borders.” Che` said, “the true revolutionary is guided by a great feeling of love” — in this Che` succeeded in transferring his revolutionary “gospel of hate” across international borders.

After Castro and Che`s military coup of Cuba proved victorious, their Stalinist influenced regime continued with executions, book burnings, and the jailing and torturing of thousands of women and some journalists. Further, many Cuban citizens were being starved and beaten in pest infested torture chambers for the crime of quoting the U.N. Declaration of Rights. Among these “dangerous citizens” were Cuban librarians and independent booksellers. Librarians and booksellers were convicted of the god-awful crime of stocking some of the world’s best-selling books.

After the takeover of Cuba, Che` was appointed by the Cuban Ministry of Justice to oversee the trials of “war criminals” and carry-out their death penalty executions. “Revolutionary Justice” was to be exacted against those considered to be traitors. The trials and executions of these “traitors” lasted for five months and had reached 16,000 when Che` boasted in a speech to the U.N., on Dec. 9, 1964; “Certainly we execute! And we will continue executing as long as it is necessary!” For many Cuban exiles, Che` rightly earned the nickname; the “Butcher of La Cabana.”

Che’ refused to be swayed by any humanitarian or political arguments. As Guevara dogmatically stated it: “We reject any peaceful approach! …Violence is inevitable! To establish Socialism, rivers of blood must flow.” “The victory of Socialism is well worth millions of atomic (bomb) victims!” “My nostrils dilate while savoring the acrid odor of gunpowder and blood. Crazy with fury I will stain my rifle red while slaughtering any surrendered enemy that falls in my hands!” This was Che’s special brand of revolutionary love.

Lest you think Guevara’s bloodthirsty rampages were limited to military criminals, he also had no qualms about torturing women and children as well. Not only did Fidel Castro and Che` Guevara kill and torture the helpless and retarded, they also jailed, starved and tortured some 35,150 Cuban women for so-called “political crimes.” You could say Che’ was gender-blind when it came to imprisonment, torture, and killing.

In 1965 Che` Guevara left his positions in Cuba’s government and dropped out of public view. He travelled to the Congo in Africa (changing his name to Ramon Benitez) to offer his talents in the ongoing conflict in the Congo. But, he soon became disillusioned. In 1966, Guevara reportedly met secretly with representatives of Mozambique’s independence movement in Dar es Salaam to offer his assistance. But, his offer to the independence movement in Mozambique was ultimately rejected by them.

Che` then altered his appearance, changed his name to Adolfo Mena Gonzalez, and headed to La Paz, Bolivia in late 1966. From La Paz, Che’ travelled to the rural southeast region of the country to form a new guerrilla army, the “National Liberation Army of Bolivia.” Fighting and killing just seemed to be in Che`s blood. But, his agitations were always cloaked in “revolution,” fighting for the poor, fighting against imperialism, or a variety of other self-aggrandizing euphemisms. He was, in his own eyes, a global freedom-fighter. Since most citizens in Bolivia were not interested in Che`s revolution, he quickly became a fugitive and was soon caught and executed.

One look at life in Cuba should alert any rational person that the economics of dialectical materialism is a complete and utter fraud and failure. The Castro’s and Che` attached themselves to an ideology that produced the horrors of fascism, totalitarianism, despair, poverty, national de-capitalization, dependence on other nations, and irreversible societal decay.

Something to think about the next time you see someone waving a Che` flag, or wearing a Che` hat or t-shirt.