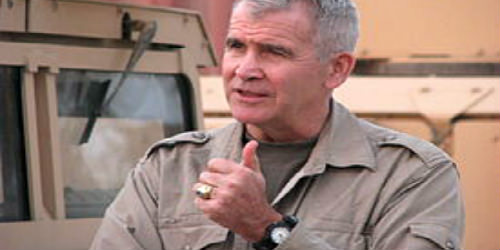 Retired Col. Oliver North was made famous during the Iran-Contra Affair hearings in the mid-80’s. He recently unmasked Obama’s ridiculous rhetoric by proving him to be a liar. President Obama recently remarked “Almost every country on Earth sees America as stronger and more respected today than it was eight years ago.”  We all know this to be a lie but thankfully we have Col. North to explain why it’s a lie.

Obama says: “THE USA is stronger & more respected than 8 years ago”

On its face that statement is delusional.

Why didn’t any of the main stream media ask “where are we stronger or more respected?”

The utopian Obama-Clinton-Kerry foreign policy is an unmitigated disaster.

Our allies no longer trust us and our adversaries don’t respect us.
Russians thumb their noses at us all over Europe and the middle east.

When Moscow hacks, Obama says he told Putin “cut it out.”
Putin delivers high-tech SAMS to Iran and the U.S. complains at the UN

Russian aggression in Ukraine and threats to Baltics are met with empty hollow threats of “consequences.”

When Obama made his grand apology tour, utopian Arab spring speech in Cairo in June 2009, Syria had 23m people.

Syrian civil war, Obama bug-out from Iraq, rise of ISIS, the IS invasion of Iraq, Al-Baghdadi’s “caliphate,” the overthrow of Gadhafi, global spread of radical Islam to 38 countries – all because of the Obama administrations weakness & failure to lead.

In South Sudan and Yemen, millions more innocent civilians are being driven from their homes and left to die.

Clear now that Obama admin – right from the start – was prepared to do whatever necessary to get a nuke deal with Tehran.

Today: Russia and Iran are calling the shots in the middle east.
In NATO ally turkey, Tayep Erdogan is dealing with Moscow and Tehran and putting NATO’s southern flank and the US base at Incerlik at risk.

Iranians, with help from North Korea and the $1.4 b Obama gave the Ayatollahs, are building nuke weapons and means of delivering them.

Obama says “we couldn’t stop it.” That’s untrue. A real POTUS would have built consensus with moderate Sunnis in Egypt, Jordan, and the UAE to stop the civil war in Syria.

Would have required U.S. logistics support & advisors but not combat troops to thwart Russian & Iranian ambitions.

But O-team didn’t want to do anything to threaten Iran nuke deal and Putin’s support for it!

Closing comment: just to make sure new admin has some role models for real leadership.

Let me know what you think of this edition of North Points & if you agree, please pass them along to your friends.

Bonus attachment: Photo of “Yours Truly” taken last month while I was covering the fight for Mosul.

Please watch “War Stories,” Sunday night [8:00 PM EST] on FBN when you can see some REAL Leaders: Eisenhower, Churchill, & our Battle of the Bulge episodes.