Retaliation as a Justification 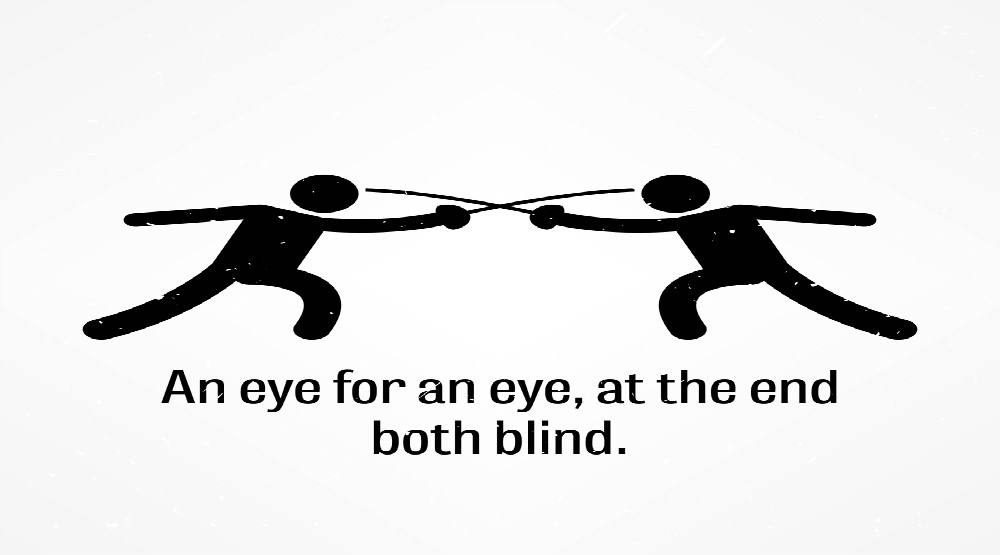 The Hatfields and McCoys are an American classic of retaliation.  The feud went on for years until there was only the memory that whoever started it was irrelevant to the fact that they were sworn enemies and would remain so.  There have been many instances throughout history where the cause of the animosity has been forgotten or distorted.  But this lack of accuracy doesn’t cool the hostility.  In the Middle East we see a constant referral of past injustices that have not been adequately answered and a new round of attacks begin. This is why a cease fire is the only interlude of peace we have ever seen.

As long as the justification of violence is based on a retaliation for a previous event where and when does the cycle end?  It is well known there are people in the Middle East fighting the remnants of thousands of years ago and in America there are people still fighting for retaliation for slavery in the form of demanding reparations. The past actions of ancestors has no relevance to people of today.  The current citizens cannot be judged by their ancestors either for good or evil.  A person is considered innocent until proven guilty and the actions of ancestors is not proof of anything. regarding the character of today’s populace.

Evidently this truth is ignored in the same way all collectivism generates discontent.  If you attach yourself to a mob and the mob is intent on demanding “retribution” for some past action of some group or individual such  as the police,  a police officer, a slave holder, a lost battle or simple racist bigotry, you act in accordance with the mob’s mindless rage whether the facts are appropriate or simply generated by imagination.  Such an instance can be verified by the manta,” hands up , don’t shoot” which was disproven.

Retaliation may be justified in instances where the initiation of force is involved.  The horror of 9/11 is a good example however the notion that we ended up in a war on terror was an intellectual misstep that has had us bombing and invading without a comprehensive understanding of the enemy and the actual identity of the enemy.  Attacking terror is like attacking butchery or killing. It is meaningless unless you find the root cause.  You have to ask the questions that lead you to the root cause.  For instance, who are the people who attacked us and where did they come from?  Who funded their action? What motivated them to suicidal action? Yes they enacted terror but what has that have to do with why?  What were they trying to accomplish and for whom?

If you have a crime committed domestically, you ask these questions and discover the culprit or culprits, why they acted as they did and what is the root cause that needs to be addressed.  A foreign attack such as 9/11 had no such inquiries.  Why? because the cowards in the political world and the press latched onto the “war” on terrorism mantra and clung to it as if it would explain something.  This vagueness led us to strike out without a well thought out objective and plans for success.  Had we identified the source of the attacks both in funding and ideology we would have been on the way to confronting the actual perpetrators , where they are located, what it would take to obtain victory and insure a lasting peace.  Instead we are still naming the enemy
“terrorism” and even sometimes misidentifying it as workplace violence.  The people not the act are the guilty parties.  What is in their head is the cause of their hatred. What they accept as acceptable human behavior must be exposed for the erroneous thoughts they adhere to.  If they are not open to reason they must be annihilated. You cannot negotiate peace with killers as Israel has been finding out over and over again.

When the enemy surrenders unconditionally and is held to the conditions as was done with Germany and Japan the threat is over.  If an armistice is declared and the issue is not resolved as in Korea,Iraq,etc., ongoing threats continue.  Living under threats is not pleasant and unnecessary.  It demands resolve and a condition of readiness that instills fear into those who try to intimidate and threaten.  It requires a willingness to outline the consequences of threats and the courage to demonstrate those consequences.

Apologetic wimpy-ness is not a protective measure.  It counts on the humanness of the enemy.  Where humanity is thought expendable it only means there will be a fight to the death and the only question is, them or us. Your love of your life can answer this question and properly should.