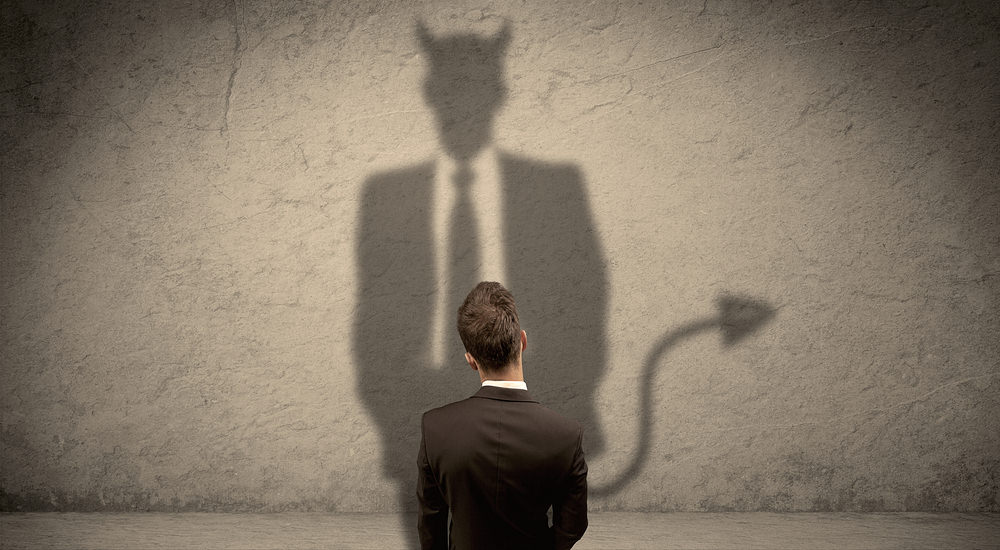 Most of us, who are normal, honorable, patriotic, decent law-abiding citizens who wish to live our lives without owning other peoples’ bodies, minds, works and souls have come to realize we are being threatened by some kind of massive, insidious aggression, but we are not fully aware of the nature of the enemy we are up against. Regardless of the “ism”, or the smiles on political faces masking the malice behind them, it is pure EVIL, the devil itself — and it’s the demonc influence in the world that we are facing and must fearlessly combat.

If you ask people if they believe in God, most will answer “Yes”, but if you ask them if the devil exists, they are skeptical.  A lot of people think this spiritual dimension is unreal. But just look at this world — warfare, terrorism, riots, torture, starvation, hatred, corruption, materialism, perversion. Is there a spirit behind these actions?  If you can believe your Bible, the answer if “Yes”.  Satan and his demons — the entire spirit world in fact, have been a great mystery to people throughout the centuries.  The Apostle Paul revealed the astonishing reason why this is the case; “But if our gospel be hid, it is hid to them that are lost: In whom the god of this world hath BLINDED THE MINDS OF THEM WHICH BELIEVE NOT, lest the light of the glorious gospel of Christ, who is the image of God, should shine unto them” (2 Corinthians 4: 3-4). Who is “the god of this world”? Most people would say God, the Creator. But “the god of this world” has blinded the minds of people to the gospel of Christ. The god who rules the world is actually Satan the devil. In John 12: 31 and John 14: 30, this evil being is called “the prince of this world.”

When Jesus Christ came to Earth, He and Satan engaged in a titantic battle for the future of mankind on earth and after death — in Heaven or in Hell. Jesus was steadfast in His divine mission and didn’t allow Satan to entice Him to sin, but he didn’t argue when Satan boasted, “All this power will I give thee (referring to the kingdoms of this world) and the glory of them: for that is delivered unto me; and to whomever I will, I give it” (Luke 4: 6).  Christ knew that Satan did indeed have charge over the world and its riches.

Note that 2 Corinthians 4: 4 says the devil blinds people to truth and reality. In fact, he has deceived mankind into believing he doesn’t even exist. The fact that holy angels and evil spirits are invisible does not mean they do not exist. In truth the invisible spirit world is more real than the material and the visible. This spirit realm has more influence on our world and on our lives than we realize. In Ephesians 2: 2, Paul told converted Christians, “Wherein in time past ye walked according to the course of this world, according to the prince of the power of the air, the spirit that NOW WORKETH IN THE CHILDREN OF DISOBEDIENCE. ” Satan works in people, constantly influencing the thoughts and actions of human beings!

People have no realization of the tremendous power of Satan. The human spirit within each person is automatically tuned to Satan’s wavelength. We must be engaged in daily, regular spiritual warfare, resisting these satanic broadcasts. Though Satan and his demons are spiritual and invisible, they routinely seek to aggravate and exploit out human nature, which exists to whatever degree we have come under their sway.  Our struggle against these enemies becomes easier with God on our side. Our spiritual lifeline to God is crucial. It is completely unnatural for us to think like God. It takes diligent, focused effort to tune out of Satan’s broadcast and tune in to God’s wavelength. We must take a stand with God through prayer, Bible study, meditation and fasting. God protects those whom He will and empowers His spirit-begotten people to resist the devil. But what must we do in order to receive this protection and power?   “Submit yourselves therefore to God. RESIST THE DEVIL AND HE WILL FLEE FROM YOU. Draw nigh to God, and He will draw nigh to you.” (James 4: 7-8).  I pray that God will endow me with His protection and give me power to resist the devil. And that He will protect my country and empower her to resist all the evil now strangling her goodness, and that those who will guide her in the future will draw nigh to God and heed His words.