Has the Republican Party Embraced Racism? 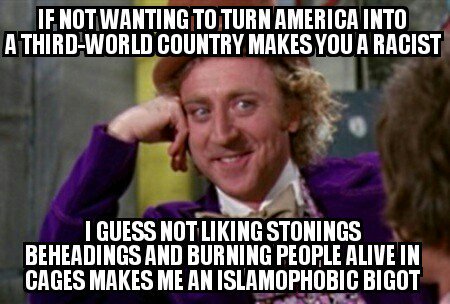 In The GOP Has Embraced Racism! (iPatriot 6/8/16) Randy Deabay answers the title question above in the affirmative by equating Donald Trump with Adolph Hitler. His main point in that section of his article revolves around Trump vis-a-vis the Muslims paralleling Hitler vis-a-vis the Jews.

Lined up and executed, their severed heads put on display as a warning to others: Horrific new photographs of ISIS atrocities

Reports came out on Thursday that ISIS had executed 250 women for refusing to become sex slaves to its militants and that it is harvesting the organs of its wounded fighters, presumably leading to their death. The organs are then sold on the black market for cash, a clear indication of the terrorist organisation’s financial woes, according to WND.

As those of us who have followed ISIS in action realize, these are far from the worst ISIS atrocities.  But there is no need to go on.

Can Randy Deabay produce a comparable list of actions by German Jews?

Has he just come down with the last drop of rain? How dare he do either?  How dare he?!

Possibly I should stop here, but there is one more thing I believe needs to be said about Deabay’s spurious associations.  Wanting to make his country great, for example, was not a defining characteristic of Adolph Hitler; thus it does not equate other world leaders with a similar desire, including Donald Trump, to Hitler-as-Hitler any more than having four legs equates my dog to an elephant.

There are valid points in Deabay’s paper, but his conclusion concerning Donald Trump is not one of them.