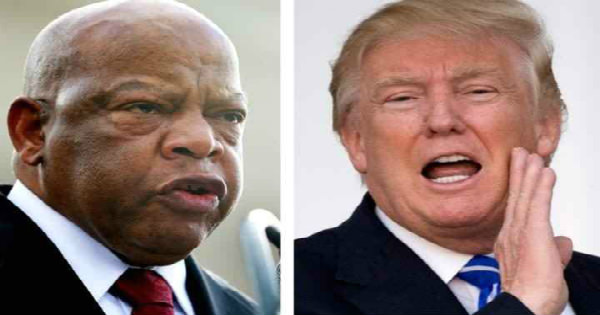 Rep. John Lewis, (D-GA), says he will not attend President-Elect Donald J. Trump’s Inauguration Ceremony on Friday because he believes Trump’s ascent to the presidency is “not legitimate.” Lewis makes this assertion without proof that Russia manipulated the election vote totals in enough states to give President-Elect Trump an Electoral College Vote victory and in spite of the FBI’s contention that there was no manipulation of voting booth vote outcomes by Russia or anyone else.

Lewis became a civil rights icon in 1965 when he marched with Martin Luther King Jr., during the right to vote march in Selma, Georgia in the racist South.

“What has John Lewis done since he marched on Selma? Really. He’s riding on the coattails of something that happened over 50 years ago.”

Admittedly, many Southern whites in the 1960’s and earlier were racist. Congress had to pass laws and then Amendments to the U.S. Constitution in attempts to shake some of the hard held belief that somehow blacks were perpetually inferior to whites by virtue of their skin color.

What is lesser known is that some blacks held and some still do, including Lewis, a racist view of whites. This flies in the face of Martin Luther King Jr.’s inspired “I Have a Dream” speech were he said,

“I have a dream that my four little children will one day live in a nation where they will not be judged by the color of their skin but by the content of their character.”

To answer Wright’s question on what has Lewis been doing the last 50 years one can look at his voting record as published in the Conservative Review. He has an “F” conservative rating which means Lewis has been voting with other liberal Democrats to take money away from hard working middle class white Americans through taxes, called legal plunder by economist Frédéric Bastiat, to undeserving blacks. Why white voters have let this go on for so long is mind boggling.

As an old 76 year old, Lewis claims that, “It will be the first [inauguration] that I miss since I’ve been in Congress” but a National Review headline reveals that “John Lewis Boycotted George W. Bush’s Inauguration, Too.”

Bad politics, memory lapses, and a life long racist; it’s time for this dinosaur to retire.