Remembering the Thousands of American Soldiers Buried in U.S. Military Cemeteries Across the World 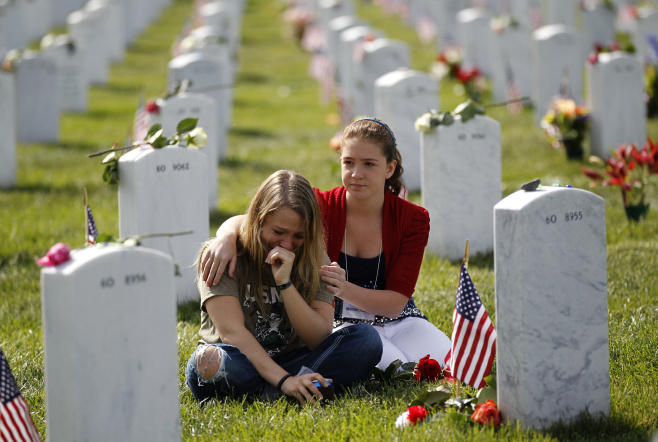 “From these honored dead we take increased devotion to that cause for which they gave the last full measure of devotion.”–Abraham Lincoln, Gettysburg Address

As we prepare to celebrate Memorial Day to pause in thanks for the sacrifices made by millions of Americans who died while fighting to preserve freedom, a documentary called “These Hallowed Grounds” reminds us that our war dead are not just interred here at home, but are spread across the world on battlefields almost lost to the memory of far too many of us.

If you are like many of us, you may not be very well informed about all the many American cemeteries erected to memorialize our legions of war dead. To correct that deficit the PBS documentary “These Hallowed Grounds” is an excellent way to learn about these bucolic and solemn memorials.

Most Americans know of the World War Two cemetery at Omaha Beach, Normandy, site of one of the 1944 D-Day landings. But there are some twenty-one other cemeteries in eight other countries memorializing our dead from World Wars One and Two and the documentary tells the powerful tale of many of them.

Our many war cemeteries are maintained by the U.S. government’s American Battle Monuments Commission and contain monuments to some 125,000 American war dead. The names of another 94,000 missing soldiers are inscribed into the Walls Of The Missing at these locations and this film takes viewers on an important journey across the world to see and learn about them.

These cemeteries are solemn places, quiet and picturesque, but they are also meant as a powerful reminder that war is a last resort, something civilized peoples should strive to avoid if possible. Yet they are also monuments to the resolve of those who stood up to fight oppressors and to champion freedom for all people.

The film takes us to American World War I and World War II cemeteries in England, France, the Netherlands, Luxembourg, Belgium, Italy, Tunisia and the Philippines, many of them actually on or adjacent to the very battlefields over which these men and women fought. All are deserving of our attention.

We hear stories such as that of the Sicily-Rome cemetery filled with the dead of battles such as Anzio which began in January of 1944 as Americans invaded to drive the Germans out of Sicily and mainland Italy. There, for instance, among the graves of some 8,000 Americans you’ll discover a monument called the “Brothers in Arms” which sits atop the graves of 23 sets of brothers who died in battles nearby.

The film reminds us all of some of our dearest and bravest individuals, country boys, city folks, the educated, the common. We hear the tales of African Americans, whites, women, American-Hispanics, American-Japanese, Native-Americans, and Philippines nationals. They came from all segments of our society and from across the world to serve under Old Glory.

We learn of the fall of poet Joyce Kilmer, famed musician and bandleader Glenn Miller, the lamented five Sullivan Brothers who all died on the same ship in the same battle, Olympic gold medal winner Foy Draper, and General George S. Patton. But we also hear the tales of many Americans who were not so well known but nonetheless heeded the call to defend our nation.

Viewers are also introduced to many foreign nationals who express their appreciation for the many Americans that fell to free them from oppression.

Americans who watch this documentary will come away with a renewed appreciation of the many who have fallen in service to our nation. We shall never forget. Me must never forget.

“These Hallowed Grounds” is a production of New Voyage Communications, was directed by national Emmy Award winner Robert Uth. It was produced and written by Robert Uth and Glenn Marcus. The film was narrated by Peter Thomas, a veteran of both the Normandy landings and the Battle of the Bulge and who just passed away this year.

This post originally appeared at Breitbart News on May 29, 2016.