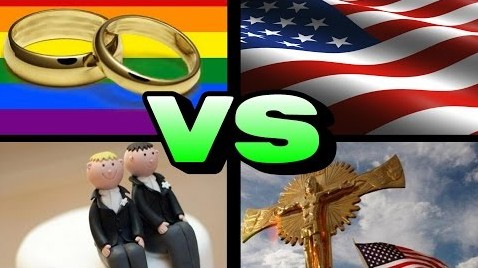 President Obama in his second inaugural speech drew from the Declaration of Independence these immortal words, “We hold these truths to be self-evident, that all men are created equal; that they are endowed by their Creator with certain unalienable rights; that among these are life, liberty, and the pursuit of happiness.”

Later in his speech he stated, “We, the people, declare today that the most evident of truths – that all of us are created equal – is the star that guides us still; just as it guided our forebears through Seneca Falls, and Selma, and Stonewall.” Comparing Stonewall to the women’s suffrage movement, which began in Seneca Falls (1848) and Dr. King’s heroic stand for equality for the black race, which Selma represents, is totally without merit.

Stonewall referred to the Stonewall Inn in the Greenwich Village neighborhood in New York City. Stonewall was the place where riots for homosexual liberation took place in 1969. This month President Obama plans to declare a site for a national monument near this Inn as a symbolic gesture for homosexual rights and the greater LGBT rights agenda.

Mr. Obama concedes that we are created beings (that we did not evolve, for we cannot be the result of both) and that our rights come directly from our Creator, which means they are not derived from the State. Since our rights are Creator given, the State is obligated to protect these rights. The question begs, “Who is the Creator?” The particular relationship of Christ as Creator has been a central doctrine of Christianity ever since the writing of the New Testament. It is one of the primary hallmarks confirming Christ’s Divinity.

In the context of the foundational documents upon which American liberty depends—when any discussion arises concerning creation and Creator—the preeminence of Christ Jesus is unequivocally central to the discourse. The truth of Jesus Christ as Creator was understood by every denomination represented in the Second Continental Congress in 1776. These patriots produced the final version of the Declaration of Independence.

Considering the above truth, does Mr. Obama’s inclusion of the LGBT movement with women and the black race under the banner of being, “endowed by their Creator with certain unalienable rights” pass muster? What does the Creator have to say about this? “God created man in his own image, in the image of God created he him; male and female created he them. And God blessed them, and God said unto them, Be fruitful, and multiply.” (Genesis 1:27-28) Jesus confirmed this truth in Matthew19:4-6. The gender specific biological necessity created by God does not allow for any alternative. It is birth identified and life extending. Every sexual combination in variance with this truth is aberrant. Granted, this is the orthodox Christian position, however, since Christ Jesus is the Creator it is the only sensible position, which brings us to the critical point.

The LGBT movement is incompatible with orthodox Christianity. The conflict lies in the fact that orthodox Christians cannot alter their moral position on this issue without denying their Creator, Redeemer, and Judge. They must be faithful to the truth. The First Amendment to the Constitution of the United States guarantees Christians this unabated right.

What may surprise the uninitiated is the fact that the First Amendment religion clauses relate specifically to the Christian religion alone. They have absolutely nothing to do with any other religion. What is religion? George Mason and James Madison gave the official answer: “religion [is] the duty which we owe to our Creator, and the manner of discharging it.” In Davis v. Beason (1890), concerning the First Amendment, Justice Field, delivering the opinion of the Court, declared, “The term ‘religion’ has reference to one’s views of his relations to his Creator, and to the obligations they impose of reverence for His being and character, and of obedience to His will.” Rightly understood, the meaning of the First Amendment is, “Congress shall make no law respecting an establishment of religion (the duty which we owe to our Creator [Jesus Christ], and the manner of discharging it), or prohibiting the free exercise thereof.”

Creator, rights and religion are inextricably linked together. Mr. Obama’s dependence on our Creator to confirm his opinion finds no validity whatsoever. His plans are backed by nothing other than a dictate from an out of control State. The irony is, the words he quoted from the Declaration of Independence represented the reputation of the will of the State by our Founders. It is the exact reason the Framers created our Constitution. In his speech, Mr. Obama failed to mention that the Declaration of Independence was predicated on “the Laws of Nature and of Nature’s God.” These very Laws that supported America’s quest for liberty deny his assertions concerning human sexuality.

Recently, the Colorado Supreme Court refused to hear a plea from a lower court decision that denied a defendant the right to cite his Christian faith as a defense for his refusal to affirm a homosexual wedding by making a cake for that specific occasion. This gentleman was not hostile toward the two homosexuals. He was put in the untenable, unconstitutional position of either denying the moral foundation of the Christian faith and his Creator, or be prosecuted by the State. It is not the man’s faith that is the problem, it is poorly informed judges. In effect, Colorado has put God on trial.

President Obama ended his speech with, “God bless you, and may He forever bless these United States of America.” It is a disquieting practice in our morally deteriorating society that politicians will call for God’s blessings on America while at the same time they support policies that rebuke His will. President Reagan understood this contradiction when he stated, “We must be cautious in claiming God is on our side, I think the real question we must answer is, are we on His side?”