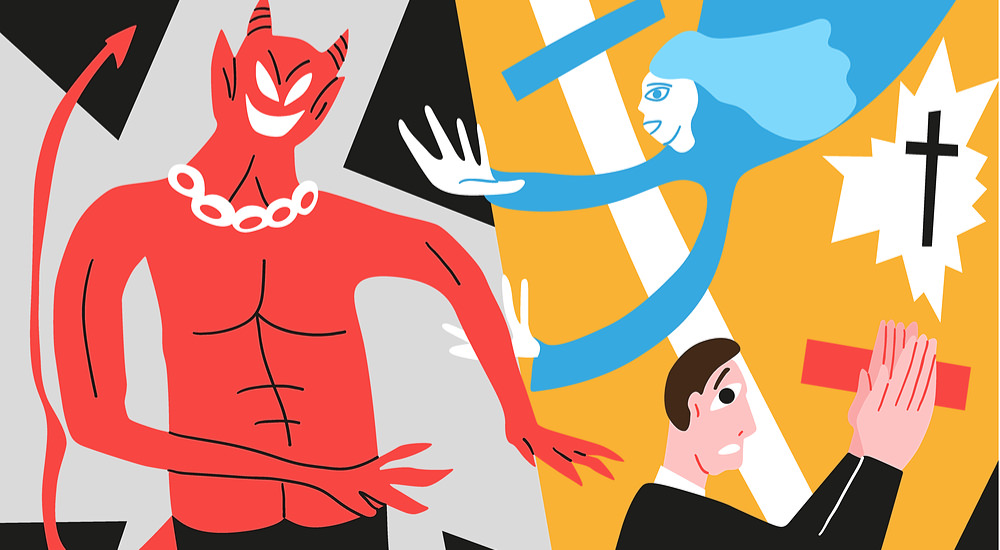 In Part I, I discussed a recent survey that revealed how the American people were turning away from religious faith. Several reasons were given that might explain this transformation from what once a nation with a majority of churchgoers who practiced their faith, to what seems to be an apathetic, spiritually deprived people caught up in a corrupt and materialistic culture.

This is part II, the addendum to “Religion, Faith and Evil” that the non-believers might deride and scoff at, and the true believers will take a deep breath, and at bedtime tonight perhaps pray for deliverance from evil. For all, it will require a leap of faith, so to speak.

It was recently reported there was a growing need for exorcisms throughout the United States and the world, and how there were too many devils, not enough exorcists, and that the Catholic Church was finding it difficult to recruit more priests to perform the Rite to defeat demonic possession.

In October of 2016 a panel of 400 Catholic priests gathered in Rome to strategize for what the Roman Catholic Church believes to be a period of growing demonic possession. According to the assembled, the situation is dire and growing, what with rampant pornography, Satanism, and the use of narcotics and the occult, which has given the devil a welcome mat to enter.  We can add to the causes of this increase in possession: cultures of avarice, greed and promiscuity, lack of respect for the dignity and sacredness of life, deprivation of traditional values and moral corruption, and of course a growing lack of religious faith.

The Catechism of the Catholic Church states: “When the Church asks publicly and authoritatively in the name of Jesus Christ that a person or object be protected against the powers of the Evil One and must withdraw from his dominion”, it is called exorcism. Now without going into a lengthy discussion on the history of what is considered by the Church a sacramental, exorcism goes back as far as the 15th century. Christians, both priests and lay people at the time, possessed the power to expel demons. We can say that Christ was the first exorcist, according to the New Testament, who expelled and defeated Satan.

In 1999 the Vatican issued new guidelines that revised the traditional Rite of exorcism. The individual who claims to be possessed must first be evaluated by medical doctors. If it is determined that there is no physical or mental aberrations, then the individual is a candidate for an exorcism by a priest who must be sanctioned by Church authorities.

Now for all you skeptics out there, as a reason and cause for concern, something real occurred in 2008;    a woman named “Julia” made medical history by speaking in foreign tongues, levitating herself six inches off the ground, and demonstrating paranormal powers. Nonsense you say, well, this event was witnessed and attested to by a panel of doctors from the New York Medical College who agreed the woman was possessed. In presenting this case in the New Oxford Review, board certified psychiatrist Dr. Richard Gallagher cautioned that “religious practitioner’s should be on the alert for a rapidly growing worldwide phenomenon”.

We now arrive at what can be a horrifying, life changing, and sometimes the deadly results of when a people arrive at a point in their lives, and they feel lost, abandoned and adrift in society, they lose hope and the result can be faith and religious fervor begins to waver. And in the absence of all the things that bring joy, happiness and fulfillment, a void begins to manifest, and in the vacuum and darkness, evil with its lies and deceit waits and festers, eventually filling the emptiness.

My intent here is not to cause anyone to live in a state of perpetual fear, but only be vigilant and always seek to do what is right and good, and not allow the darkness to enter into your life. And keep in mind, we are all susceptible to the evil ones lies and deceit, yes even those who practice religious faith. There is a poem that might best capture the essence of this, here is one verse:

The sinful, selfish and faithless, / it is they the devil inspires, / but it is the good, God-fearing and faithful ones, /the father of lies desires.