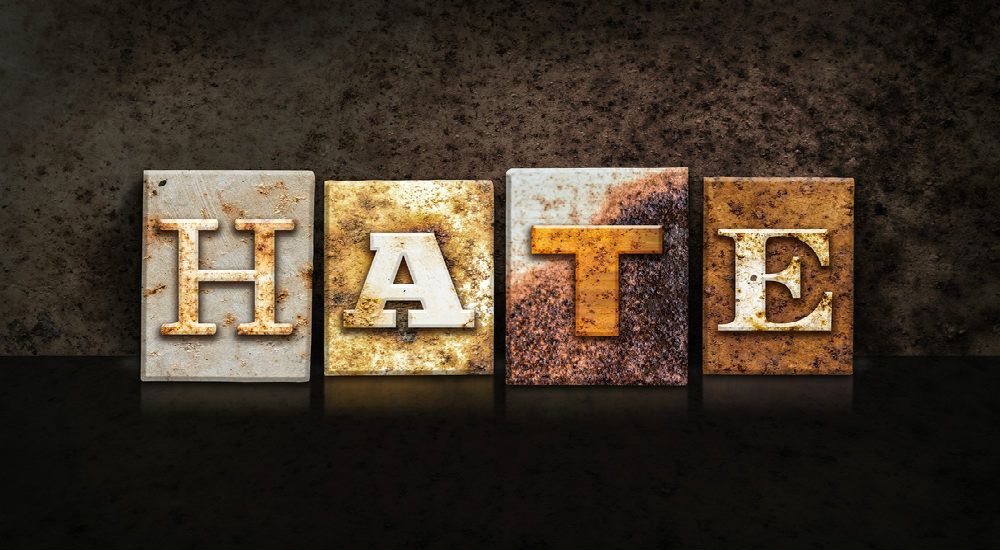 The great division that threatens our nation is symptomatic of an intolerance and seething hatred that is polarizing and corrupting civil discourse. This hatred must be recognized before it can be conquered. If it is not conquered, the future of our Constitutional Republic is not secure.

An ever-present theme that dominates certain 24/7 news outlets is laced with invective, seething hatred, and animosity:

All of the above within just one 24-hour timeframe. Namecalling. False claims of motivation and dishonesty. These are the tools of those who are seething with rage and hatred.

All were directed at Donald Trump.

A truthful, blunt new political ad days before the midterm election that skewers the open border posture of Democrat candidates across the nation.

Trump shocks with racist new ad days before midterms
(CNN) – In the most racially charged national political ad in 30 years, President Donald Trump and the Republican Party accuse Democrats of plotting to help people they depict as Central American invaders overrun the nation with cop killers.
…
The web video — produced for the Trump campaign — features Luis Bracamontes, a Mexican man who had previously been deported but returned to the United States and was convicted in February in the slaying of two California deputies.
“I’m going to kill more cops soon,” a grinning Bracamontes is shown saying in court as captions flash across the screen reading “Democrats let him into our country. Democrats let him stay.”

Democrats (i.e., CNN as one of the nonstop propaganda organs for the Democrat Party) are outraged by the truth being plainly put before the electorate.

So how do Democrats and CNN respond? Namecalling. Hatred. Invective. Is this the Party of Hate?

The real root of CNN’s outrage is that the ad exposes the consequences of Democrats’ policies and support for open borders, “sanctuary” jurisdictions across the nation (California is a “sanctuary State”), and their pledges to “abolish ICE” and not build a border wall.

Is the ad racist?

Of course not. But it is “racist” to make the ad the focus of race as has CNN. It takes a polluted racist mind to fabricate racism in a story about a criminal illegal alien from Mexico who murdered law enforcement officers, brags about it, and pledges to do it again if he should get the opportunity! Yet that is exactly what CNN has done.

The ad is certainly not racist.

The CNN story is racist.

Democrat-supporters like George Soros and the Irish-Mexican Democrat candidate (O’Rourke) running for Senator from Texas help supply and organize packs of Central American invaders whose sole purpose is to illegally enter the United States across the open border with Mexico.

Meanwhile, Democrats steadfastly oppose the construction of any impediment to an ongoing invasion that has illegally brought tens of millions of non-citizens into this nation whose cost to this nation far surpasses the cost to build an effective barrier to illegal alien crossings.

This ad makes crystal clear why border security is essential. It makes crystal clear that were it not for the opposition of the Democrat Party, a border wall would be fully funded that would prevent any illegal aliens, drug smugglers, human smugglers, ISIS agents, cop-killers, and murderers from crossing into the USA.

Apparently, CNN and the Democrat Party think the ongoing invasion is perfectly fine and the dangers and losses enumerated above are acceptable. Why else would they continue to oppose effective measures to secure our southern border?

This issue marks a clear distinction between the Democrat and Republican parties.

Republicans want to assure border security. Republicans want to secure the sanctity of legal immigration so that those who share our belief in our Constitutional Republic and who have the skills for a job that will sustain them can enter our nation legally.

Democrats are looking for future voters, illegal aliens who will not assimilate, do not share our beliefs in our Constitutional Republic, and who, if Democrats are given power, they would grant voting rights. This is a long-time ploy that has seen an enormous increase in non-citizens voting in California, where the Democrat-controlled state openly supports non-citizen voting registration.

Democrats in San Francisco have decided to allow non-citizens to vote in all but Federal elections. Democrats in Washington, D.C. are considering to lower the voting age to 16! Given the human brain is not fully developed until age 26, that is a step in the wrong direction.

As Black Americans begin to realize that they’ve been taken for granted and are leaving Democrat voter plantations, Democrats are scurrying to compensate by importing mobs of potential replacement voters from Central America and by giving voting rights to non-citizens and minors.

It is very clear which political party embodies the “ends justify the means” political philosophy of Saul Alinsky whose disciples include former President Barack Hussein Obama and former Secretary of State Hillary Rodham Clinton (who considers Alinsky her mentor).

One party will do anything to secure and hold political power.

The other party plays by the rules and tries to enforce our constitutional responsibilities.

Think about which party you want to represent your interests before voting.

The wrong choice would further divide this country, continue the fiasco of open borders, and create a political crisis rooted in partisan political resistance to the elected President who has accomplished more good for this nation in his first two years in office than any President in this nation’s history.

Chaos, crisis and more division? Or jobs, opportunity, and a chance to heal?