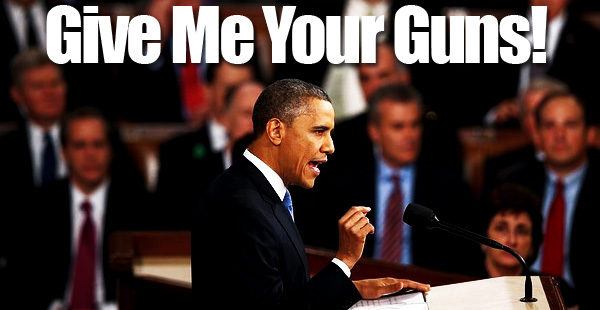 Obama and the Democrats will use this tragedy in Orlando as an opportunity to pass laws against the second amendment.

The U.S. Government created ISIS and ISIS claimed responsibility for the Orlando shooting. Since ISIS was responsible for this tragedy, ISIS could attack anywhere in the U.S. Therefore, Obama says, the U.S. Government must get involved because it is now a national issue. However, this shooting happened in Orlando Florida, not everywhere in the country. This tragedy needs to be dealt with by the local police in Orlando Florida, not by Obama, the federal government, or even the state government. In plain English: Obama and Rick Scott need to mind their own business and butt out!!!

Folks, I expect to see many more of these shootings by the globalists to happen between now and the November election. Obama and his globalist Elite friends are going to force the gun issue to be the number one issue in this election. The globalists must disarm America before they can implement their New World Order.

NOW MORE THAN EVER AMERICANS MUST BY GUNS AND CARRY THEM EVERYWHERE TO DEFEND YOURSELVES.  WE HAVE A MAD MAN IN THE WHITE HOUSE WHO WILL SHOOT EVERY AMERICAN, IF NECESSARY, TO PASS GUN CONTROL LAWS.

America is unique from every country in the world mainly because of one big reason – GUNS!

Millions of Americans own guns!

We are living in very dangerous times today. We have a president sitting in the White House (Barack Obama) who is not a Natural Born American Citizen; he lies to the American people; he steals private property from innocent Americans and uses the natural resources on that property to either satisfy a debt with China or sell Uranium to the Russians; and he assassinates innocent Americans to get gun control laws passed.

The Second Amendment to the United States Constitution:

“A well regulated Militia, being necessary to the security of a Free State, the right of the people to keep and bear Arms, shall not be infringed.” (In other words no government federal, state, or local can pass one single law against the second amendment or restrict the second amendment in any way. Also there is no such thing as “reasonable gun control laws.” They are all gun control laws. Abolish them all!!!)

Any Democrat or even Republican politician who supports gun control needs to be hung!

A tall tree and a short rope for any politician who supports gun control!