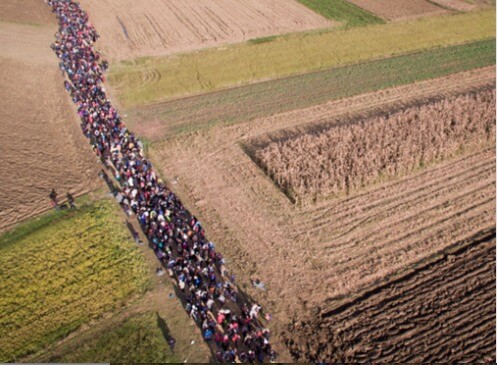 After WW II, America brought in over 500,000 refugees from war-torn Europe; the largest amount of people ever. The vast majority were Christians, looking for a better life. Since we lost about 465,000 men in the conflict, the end result was pretty even in regards to population. At that time, America controlled who, when and how refugees were admitted to our sovereign country.

Since then, we have brought in Russians, Indians, Vietnamese, African nations and others. The average yearly total is about 10,000 to 20,000, usually when a certain country has been torn apart by war. Most, were, again, Christian nations.

Starting with LBJ’s Great Society, America started offering, for free, over 80 different welfare programs to refugees and illegal immigrants. Today, we are spending over 120 billion dollars per year supporting people from different countries that cannot make ends meet. A billion minutes ago Christ was on the earth.

Now, with our Muslim President in charge, and the United Nations dictating how many refugees go into which country, Muslims are streaming in, right under our noses. They are NOT Christians, do not want to be assimilated into our culture and believe in Sharia law, which is against our own Constitution. Obama has started with 100,000 of these displaced Syrians and middle-eastern people. Europe is lost as rape, robbery, and murder are now rampant and uncontrollable, while the officials look the other way.

It is estimated America will spend 6.3 trillion in the next 50 years on refugees and illegal immigration if it continues to be uncontrollable. We are currently 17 trillion in the hole. A trillion seconds ago, was 159,000 thousand years ago, before written history existed.

We cannot afford to continue to placate the world’s problems, at our expense. We cannot morally bring in people that do not believe in our way of life. 98% of our prisons are filled with people that are NOT of north European ancestry, that is: English, German, Scottish, Irish, Norwegian, etc.

The safe haven of America cannot stand the Muslim invasion, regardless of how the media paints the canvas. The sick part about it is that the problem will become epidemic in the next 2 generations, not ours. Let them figure out their own problems in their own countries. They have been fighting for thousands of years; let them do so in their own lands, not ours.

It’s stupid to think we can bring these non-Christian peoples into America and transform them, when they do not care. It will be a sad day, when we have another revolution, once again in America, against Muslims, that should have never been brought here in the first place. Close the borders, and deport these monsters. Eisenhower deported 2.5 million illegals in the 1950’s…we can do it again and make our country great again..