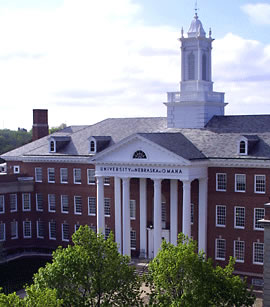 I had been working in Hungary on my PhD in biology in July 2011 when I applied for a postdoc position in the lab of professor X, professor at UNL. I viewed this as a major way in which I could advance my career, so I happily accepted the position. I packed my bags and arrived in Lincoln on August 12, 2011. I soon got a taste of who professor X was when we were barely 15 minutes into Lincoln, since he had come to pick me up along with his wife. We stopped right in front of the strip tease bar on M street. Knowing that I was an evangelical Christian, he still had the audacity to remark to me that I should visit the strip tease bar some time. His wife was appalled and almost started shouting with him.

After joining professor X’s lab it then really turned out what kind of man he was. This man made very perverse sexually explicit jokes, sometimes involving male genital parts. I thought that these jokes were very disgusting and was just waiting for the joke to be over. There was one incident when professor X even went to tell me that I should watch pornography with my girlfriend at that time! Professor X also often made overly critical remarks about other people in the institute, sometimes even other people in our own work group. Hypocritically, he would make nice comments to them later to their faces. He constantly characterized the church as being money grubbers. The professor wasn’t satisfied with my work for the most part and there was a constantly hostile atmosphere, his demeanor towards me was for the most part demeaning and arrogant.

After two years I told my professor that I wanted to leave, and we agreed that I would look for another position elsewhere. Almost at the end of my stay in his lab professor X found out that I was a creationist. I believe in a literal six day creation account in the book of Genesis along with 45% of this country, according to polls. I had also given a presentation at a large church in town, about how science proves creation and refutes evolution. My professor ordered me to remove this presentation which had been put on the Internet, even though this man had never been to the church and was never present during the presentation, as if he had a right to regulate and determine his workers’ religious views. We had also been working on a paper on ribosomal regulation. We had submitted the paper to several journals, unsuccessfully. One of these journals I will refer to XJ (X Journal), which we had submitted to in mid-2013. Professor X had inquired with XJ as to the reason for rejection of our paper. He was informed by XJ that the editors or the referees had Googled my name and found out that I was a creationist. Professor X let me know about this, and he was very displeased. The last incident before I resigned at UNL was when professor X came into my office and started shouting at me very angrily, in the presence of a grad student. He accused me of shi++ing into science. He told me that I had no right to study biology as a post-doc at UNL because I didn’t believe in evolution. This lasted for about 20 minutes. Professor X’s demeanor was very aggressive and arrogant. He was beside himself, I had never seen a man like that in my life. He demanded that I resign. I had never ever been so humiliated in my life because of my beliefs.

Still, there was more to come. After I had left UNL and had been looking for a job at home. Greatly perplexed at the turn of these events I decided to write a nonchalant letter to XJ inquiring about the reason for being rejected. The journal allows non-corresponding authors to do so. The journal passed on my email to professor X who subsequently wrote a vehement angry aggressive letter demanding that I do not contact the journal. It was to me as if he had lost his mind or something.

All in all, I think university reform is badly needed so as to prevent such abuses in the future.