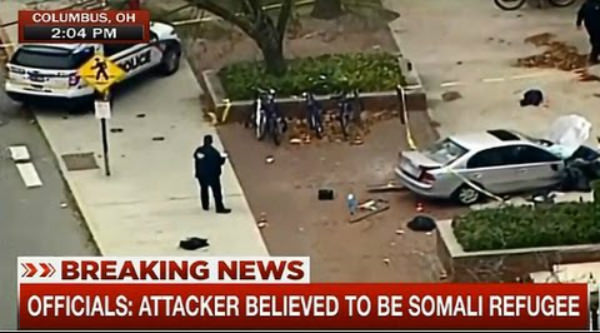 There are 2 simple, but important, elements that lead to attacks like the recent one at Ohio State University, and they are too often overlooked in our search for the roots of what we tend to misperceive as political “Radicalization.”

Humans typically desire to identify themselves with something larger than, and beyond, themselves alone, hence we all tend to identify ourselves with some group or other (Hispanics, African-Americans, Veterans, Republicans, etc.).  This tendency is exacerbated and encouraged by the liberal-progressive movement, which uses group differences to pit groups against each other, the exact opposite of our Founding Fathers intentions, as expressed in our national motto, “E Pluribus Unum,” “From Many, One.”

1.Some cultures, including most gangs and some of the Arabic-Muslim cultures, are taught that it is natural and appropriate to respond to being “disrespected” (or sometimes just disagreed with), by using violence rather than verbal discussion. In this kind of culture, violent aggression is the normal and expected “teaching method” for responding to any perception that one has been “offended.” College professors and “Snowflakes” don’t live in such a culture, and often just don’t “get it.”  Thus, they typically remain unaware of how their beliefs, which they may see as just “standing up for the underdog,” can lead to public violence.

2. Here is no need to politically “radicalize” a member of such a culture in order to inspire him to violence. It is often enough merely to make him believe that he, or a group with which he identifies, has been dishonored or “offended” in some way.  THAT is the greatest danger presented by the liberal-progressive movement’s creation of spurious offenses like “micro-aggressions,” PC language, etc. that have led to the development of our current national “hypersensitivity to offense.”  They are promulgating a belief that as a member of a certain group, one is entitled in some way to be treated as special, and,  if one’s expectations (no matter how childish or ridiculous) are NOT met, then one has truly been “Offended.” When these 2 elements are combined, they can produce an explosive recipe for individual violence, justified in the perpetrator’s mind by his having been “offended,” and requiring, or at least justifying, a violent “lesson” (seen clearly in Abdul Artan’s “I am warning (or teaching) you, Oh America,” rant). While often misunderstood as a political action (the so-called “lone wolf” terrorist attack), it is actually a very personal act of violence, motivated by personal rather than political feelings, although it may arise from one’s identification as a member of a group (such as Muslims, or “Crips”). When it is only directed towards a specific individual, it is essentially the same response, but isn’t considered “terrorism,” just murder. “Honor killings” fall into this category too. So, for Muslims raised in violent societies, it is not necessary to be politically “radicalized” in order to act violently, it is only necessary to believe you, or your group, have been “offended,” something liberal-progressives have been teaching them for years now.