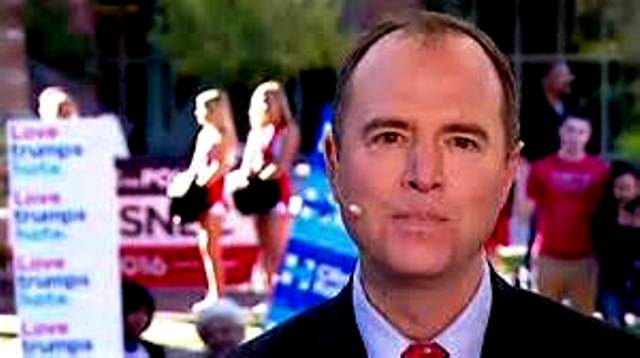 Normally the picture is the last thing we put on a post as the soul of the piece develops in writing and the illustration idea emerges therefrom. Today there will never be a better example of the mind of the elected Democrat than California’s Adam Schiff. He is the most unctuous looking man in Washington, DC and a regular guest on the video insane asylum, MSNBC. However…

Today Rep. Schiff broke into the big time appearing on ABC’s “This Week” with “Cry Me A River,” Martha Radatz who used to be a First Class battlefield reporter ducking bullets in Bagdad or throwing up in an F16 during combat maneuvers until she gave Hillary Clinton her heart. I have not seen such a crush in a female since I was in junior high school having the worst experience, and teachers, of my life. On election night she was all “all a-blubber.”

I record every show so I can go through them quickly as they are 40% ads and there is a limit to how many times I can see the computer generated lady in the Restasis commercial. I get so carried away watching her I don’t hear the “…thoughts of suicide,” voice-over disclaimer. Maybe that’s the reason they made her so perfect. I must thank her for proving I am not dead yet.

From the collection of video pundits I learned 57% of the people do not think Vladimir Putin’s actions handed the election to Mr. Trump. NBC’s Chuck Todd also insists the Russians did not hack Hillary’s home server! This means that for the first time in history Chuck has proved a negative proposition!

Watching Chuck make that statement, from the edge of his chair, it was clear Chuck suffers from “RAS,” Restless Appendage Syndrome which is a high anxiety malady common to compulsive liars and major media hosts. Or, maybe Chuck just had to pee… Animated he was…

On his panel Chuck had Yaniche Alcindor the New York Times, National Political Reporter. She is a black lady who says “ax” for “ask” and other such Ebonics words to prove she has not caved in to “Whitie,” and that she is “real angry.” Three generations back her folks may have been slaves, but she is not, never has been and we welcome her work, but please speak our language if you expect our money.

The most important information to come out of a morning with all the networks overpaid performers was the claim ABC knows the FBI and NSA have malware programs the Russians planted in the DNC servers rigged to broadcast to an address in Russia that was written with “Cyrillic” characters!

As one who has published over 400 computer educational programs for the Apple IIe, including machine language routines, let me say this is a lie and there is no other word for it! (See Worldcat.org Input Adrian Vance) The program would be written in computer language with digital characters or it would not work. These are not “Cyrillic.” A computer language is an entity unto itself and you comply with it or there is no program.

Organization as hip as Russian intelligence groups would never have such a program send messages back to them at a known Russian address. They would hire a dummy forwarding service anywhere on the planet to forward to them thereby covering the ultimate address in cyberspace; not a tall order.

Meanwhile, we are told that Barack Obama knew of this in June 2016, and in a meeting with President Putin and told him to “…cut it out.” Vlad did not and Mr. Obama went into his thumb sucking “lead from behind,” act, doing nothing, not even informing the DNC they were being hacked! With friends like Barack you have no need for enemies! I came up with better lies in junior high school! These people are idiots!

To cap this idiotic play for a Sunday: Donna Brazile, another lady who ran out of “g’s,” cannot complete a gerund and says “ax,” claimed, “…the Russians weaponized John Podesta’s emails!” Not only do we not know of any way that could be done, save attaching a malware program to a text file, which has to be set off by the recipient clicking on it. No Podesta emails have such attachments and no one is saying they do. This is another lie created by Donna, and it only confirms what we have wondered about leading Democrats. They are insane!

Representative Schiff is on the House Intelligence Committee and speaks with great authority, but to ABC’s credit they had Representative Peter King, Republican, New York, who is also on the House Intelligence Committee. He disagreed that they had been told anything, noting that last week they had invited the CIA to a hearing to tell what they knew and present evidence, but they did not show up! It would appear they had nothing! Representative Schiff disagreed saying he knew, but not how! It is amazing how long, and with nothing in his quiver, Mr. Schiff can maintain that smirk! He is clearly living in his own fantasy world.

The organization of intelligence bureaus is very different from business entities or even other bureaus. They work in independent cells for security and hypothesis confirmation. Two or more cells are often working on the same project for the heads to see if they confirm one another as the information may be critical. The result is often chaotic, but that is a hazard of the business. It is now thought one cell of politicized, younger agents hatched or were convinced to tell this story and there is really nothing to it, but that too is more speculation and you are only seeing fake reality TV.