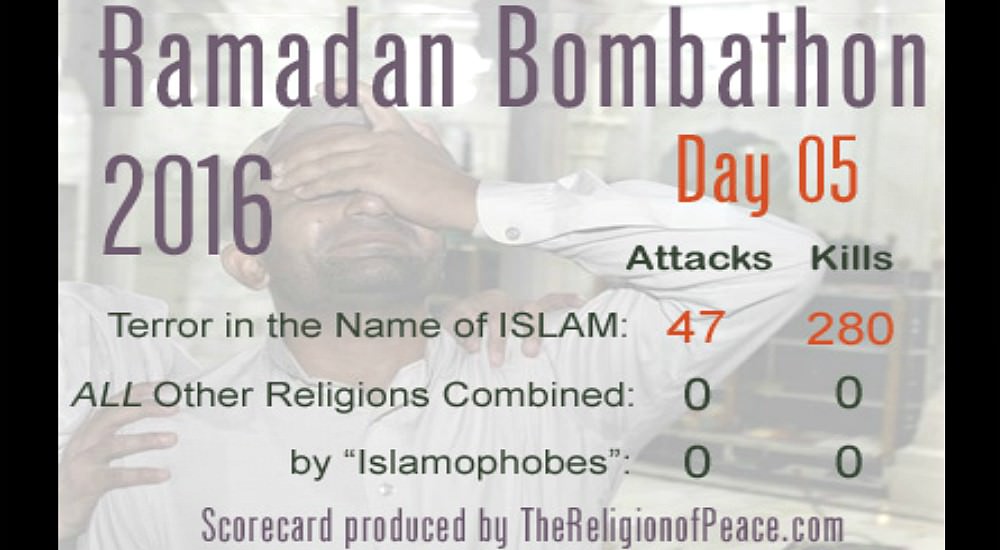 Hey – it’s Ramadan. Let’s smash things, burn churches, stab, shoot and bomb the infidels. It’s the perfect kick off to the Muslim HOLY month of Ramadan, which began at sundown Friday, May 26 and runs through June 24.

History.com writes that, “Ramadan is a holy month of fasting, introspection and prayer for Muslims, the followers of Islam. Fasting is one of the five fundamental principles of Islam. Each day during Ramadan, Muslims do not eat or drink from sunrise to sunset. They are also supposed to avoid eating, drinking, smoking and sexual activity, as well as unkind or impure thoughts and words, and immoral behavior.”

I assume that “unkind and impure thoughts,” as well as “immoral behavior,” do not include the murder of close to 200 people, and injury to thousands – so far.

“Muslims break their daily fasts by sharing meals with family and friends.” Then a few jumped into a van with 12 inch knives, drove into London, running over and wiping out dozens, before exiting the van to begin stabbing as many as they could before armed police finally killed them.

“Ramadan is a time to practice self-restraint and self-reflection. Muslims go to work and school and take care of their usual activities during Ramadan; however, some also read the entire Quran, say special prayers and attend mosques more frequently during this time.”

Yes, some attend Mosques more frequently. Others, like in the Philippines, chose instead to visit a Christian Church.

Upon arrival to the Church, instead of praying, the Muslim “visitors” threw Christian statues to ground, smashing and stomping on them. Not satisfied with the destruction, they set the Church on fire. Happy Ramadan!

Still another Islamist whack-job entered a Manila hotel and casino and set it ablaze, killing 40 guests.

There have been close to 200 killed so far and Ramadan just begun. Only 10 days in and there has also been massive property damage, not to mention the fear of future attack that is mentally weighing on people.

This is real terrorism. Terrorism isn’t just about blowing ones-self up and killing infidels. It’s also about the purposeful and entirely intended consequence of putting the fear of Allah into people. And it’s working.

People, especially those in Europe, are so terrified and so paranoid, that the sound of a car backfiring or a single firecracker can set a human stampede in motion.

For example, last Saturday night, there was a soccer match taking place in a stadium in Turin, Italy. 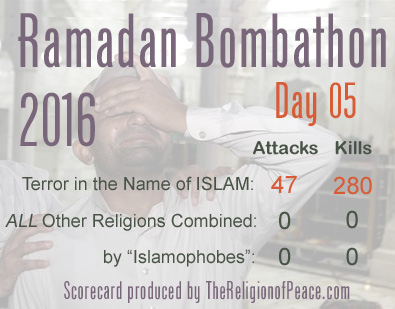 Apparently a single firecracker was set off in the stadium, possibly as a prank, or to celebrate the game. What followed was no celebration. It was terror. Figuring it was an attack, the fans in the stadium began running for the exits like so many petrified cattle, trampling and crushing others.

In all, over 1500 people where hurt, some critically, including a seven year old boy.

In Spain, a 22 year old Muslim man from Morocco broke into a Church during a Christian wedding ceremony, screaming “Allahu akbar,” then tried to attack the priest. Luckily he was unarmed and quickly subdued.

In Melbourne Australia, a Muslim man, out on parole, murdered a man and took a woman hostage before he was killed by police. During the ordeal he called a local TV station and claimed, “This is for IS, this is for al-Qaeda.” Happy Ramadan!

The Daily Caller reports  of twin suicide bombings in Iraq and a massive vehicle bomb attack in Kabul Afghanistan. The first Iraqi bombing, at a Bagdad Ice Cream Shop, took out 12, including small children. The second, at an elderly center, killed an additional 10. Over 100 were injured in the two.

“The bombing in Afghanistan killed nearly 100 people and injured hundreds more. The massive suicide vehicle struck one of the safest areas of Kabul in Afghanistan and destroyed parts of the German embassy.”

I leave you with this fun fact. The man suspecting of influencing at least one of the London attackers is Ahmad Musa Jibril.

The jihadi preacher doesn’t reside in some Afghan cave or Libyan hell-hole. He lives in Michigan. And not just anywhere in Michigan. Jibril lives in Dearborn, also known as Dearbornistan, due to its concentrated Muslim population and “No-Go Zones.”

So Happy Ramadan everyone! May we survive until the 25th of June.