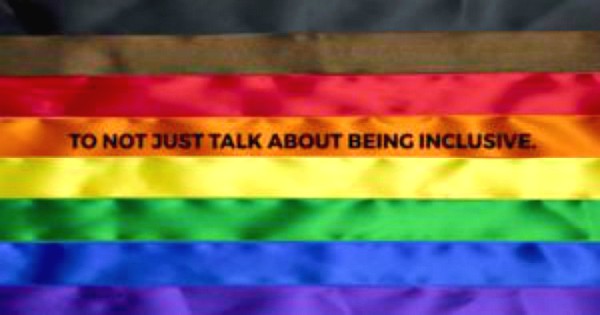 A couple of days ago, The Blaze reported that the city of Philthadelphia “Office of LGBT affairs” has recently unfurled a new flag – the multi-colored rainbow LGBTQ+ flag. They just keep adding more letters – and now even a symbol. Talk about a run-on

So Philadelphia, which has a total debt of $14.3 billion, or $27,500 per taxpayer (the third highest per capita in the nation), has enough money to fund an Office of LGBT Affairs for what is claimed to be 3.9 percent of its population. And I doubt the percentage is that high.

Anyway, the Run-On Acronym Society (ROAS) claims the new and improved rainbow flag will “show their support for people of color [POC] who are gay, lesbian, bisexual, and transgender. We say that we’re inclusive. We celebrate it. Now it’s time to go further.”

The colors they added to show solidarity with the POC are of course brown and black. This may seem inclusive, but to me, this instead shows how racist the ROAS really is, that other-than-hetero POC don’t and can’t identify with the pretty colors that already adorn the flag.

And The Blaze rightly points out that one color is conspicuously missing. Can you guess which one? You got it – white. But of course. That’s because, as Amber Hikes, director of Philadelphia’s Office of LGBT Affairs, says, “white people do not know what racism looks like, because that’s the definition of racism.” Huh? White people may not know what you just said.

This flag nonsense got me thinking. If brown and black had to be added, we must naturally assume that the other colors of the flag are already taken. Seems reasonable – right?

But who claimed, or was awarded the orange stripe? Assuming the oompa loompa are heterosexual, that leaves only one “Orange Man” to claim the flag’s center stripe. That’s right – President Trump. And hasn’t the left cast President Trump as the orange man? Why yes they have.

The HuffPo described Trump as the man with “yellowed cotton-candy hair, orange spray-tanned glow and blowhard rhetoric riddled with promises he cannot and will not keep, Trump’s appearance was quite literally cartoonish — a visual of absurdity drowned in Technicolor hues.”

A lefty YouTuber mocked the president with a video simply entitled, “Donald Trump The Orange Man.”

Being that the President is apparently the only human to fit the description of Orange man, I’d say the LGBTQ+ etc., etc. gang has a problem. And I’d say they are faced with only two choices to rectify the situation.

They can of course stop mocking the President’s appearance, but we may as well ask them all to stop breathing. The only other option is to take the orange out. Maybe replace it with a nice pink or salmon color. That’s the ticket.

This is all tongue-in-cheek of course. However, knowing how mindlessly reactionary the unhinged left is – if the ROAS community ever got wind of this or if the right began to promote this notion, they would tear out that orange stripe faster than you could say LGBTQ+. And that would be fun to see.