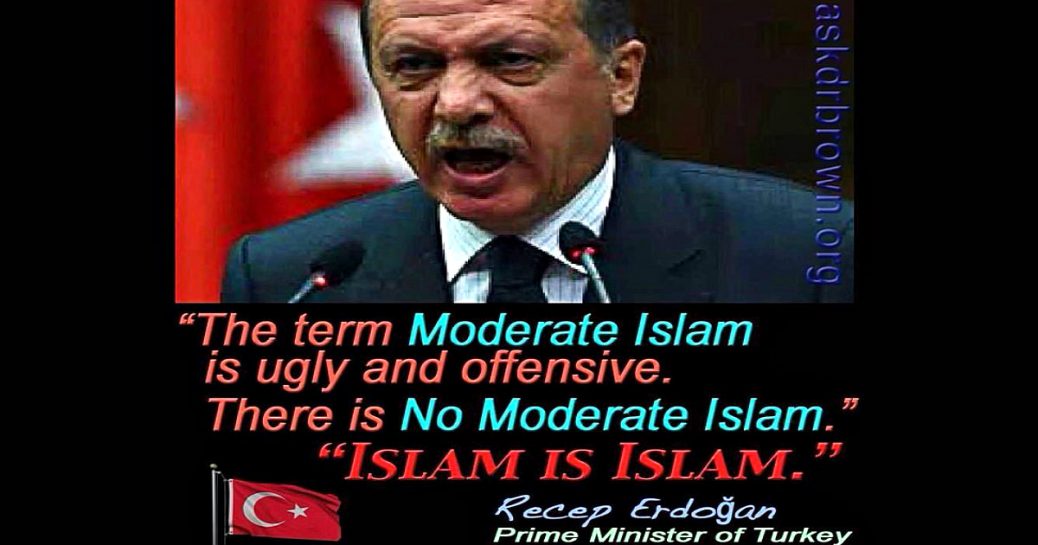 Most non-Muslims have little actual knowledge of Islam. They have never read the Koran, hadith reports, or books on sharia, Islamic law. Thus, their knowledge of Islam comes primarily from the half-truths and lies provided by the mainstream media (MSM). One example of the half-truth and lies is the MSM’s portrayal of Muslims as either radical or moderate.

However, the MSM never explained how the behavior or ideology of Radical Muslims distorts Islam. This is because it doesn’t! In reality, Islam is an ideology of hatred and intolerance, which is manifested through mandated behaviors such as violence and warfare. In addition, Radical Muslim imitate Muhammad’s behavior, which, they are obligated to do if they want to go to paradise. According to sacred Islamic sources such as the Koran and hadith reports, Muhammad’s behavior included being an: assassin, bandit, murderer, pedophile, rapist, robber, slave owner, thief, thug, and warlord. He was also a mass murderer of those who refused to convert or submit to Islam. And, he was an incestuous wife-beating liar. Thus, Muslims who murder, rape, and steal are not distorting Islam; they are pious Muslims living in accordance with its basic ideology, including imitating Muhammad’s behavior.

After creating Radical Muslims to incorrectly explain the bloody and violent side of Islam, the MSM then created the category of Moderate Muslims to show the “religion of peace” side of Islam. It was also claimed that the hundreds of thousands of Muslims being allowed into the United States were all thoroughly vetted and found to be Moderate Muslims. According to the MSM, non-Muslims have nothing to fear from Moderate Muslims since they do not follow many of the well-known ideological pillars of Islam, nor do they follow Muhammad’s behavior. Thus, they do not engage in jihad, wife beating, female genital mutilation, pedophilia, rape, the murder of gays and lesbians, and the slaughter of non-Muslims. In other words, since Moderate Muslims do not follow the core ideology of Islam or Muhammad’s behavior, they are distorting Islam.

While discussing Moderate Muslims we should ask, “During World War II would”:

– Americans have allowed Moderate Nazis into the United States?

– a political party have been so out-of-touch, stupid, or suicidal as to consider a      Moderate Nazi for its chairperson?

– critics of Nazism have been accused of Nazi-o-phobia?

– Americans have wanted Moderate Nazis to reform or to destroy Nazism?

– Americans have stated that Radical Nazis had taken a peaceful ideology — Nazism — and transformed it into something evil?

Just one more minor issue needs to be addressed. Basically, according to Muhammad and the Islamic god, Moderate Muslims don’t exist! Islam is not a cafeteria ideology where Muslims are allowed to select from a menu. Early in his prophecy Muhammad recognized that some of his followers said with their tongues what was not in their hearts. Muhammad did not consider these followers to be Muslims but hypocrites. Additionally, the Islamic god knew that some of Muhammad’s followers believed in certain parts of the Koran but they rejected other parts. According to the Islamic god, these “Muslims” were also hypocrites. And, hypocrites are the worst of the worst and after death they will receive a “grievous torment” and reside in the deepest and hottest part of hell.

Almost certainly there are many decent individuals who call themselves “Muslims.” They want to live in peace and raise their children in safe and prosperous environments. The problem is that the core of Islam demands the conversion, subjugation, or murder of non-Muslims. Muhammad stated, “I have been ordered by Allah to fight against the people till they testify that none has the right to be worshipped but Allah.” Muhammad followed the order of the Islamic god by conquering the non-Muslim tribes in Arabia. And, for 1,400 years Muslims have obeyed the Islamic god’s command and followed Muhammad’s behavior. As a result, hundreds of millions of non-Muslims, who refused to convert or submit to Islam, have been slaughtered. Many “Muslims” claim that they are willing allow other religions to co-exist with Islam, and that they will not murder those who refuse to convert or submit. They may also state that: women are not inferior to men, gays and lesbians should not be murdered, and slavery is immoral. Additionally, they may believe that cutting off the hands thieves, as specified in the Koran, is a little severe. But, why — when your prophet and god have assigned you to a fiery hell — do these “Muslims,” who reject Islam’s core ideology and who do not follow Muhammad’s behavior, consider themselves Muslims?” Are they ignorant, stupid, or liars?

The United States is a country of immigrants, most of who assimilate into the mainstream culture in a few generations. Some have not fully assimilated, such as the Amish. However, never has the United States knowingly and willingly allowed a group to immigrate whose primary ideology mandates the conversion, subjugation, or murder of those who do not share their beliefs! It is time to stop the immigration of all Muslims!