Rabbi who Survived Shooting Thanks Trump and the USA 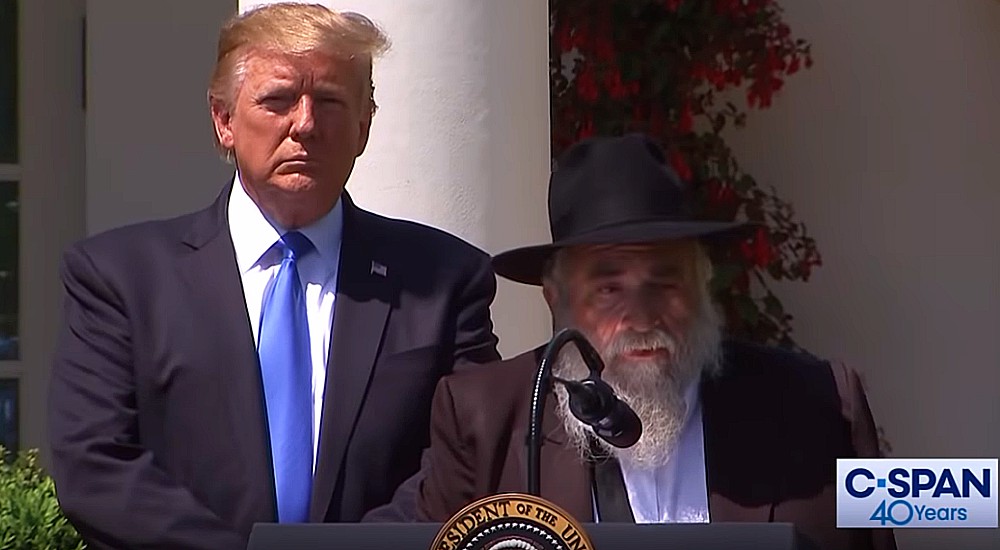 President Trump is often attacked as callous or rude. The reality is that he is very emotional, and he makes connections with people across all lines.

He recently showed that talent for connecting, when after the shooting at the Synagogue in Poway, California, he called the local Rabbi to extend his condolences and an offer of help.

The President’s call made such an impact on Rabbi Yisroel Goldstein that he was soon praising President Trump to anyone who would listen.

Even today, a week later, the Rabbi still can’t get over how President Trump cared for him.

Rabbi Yisroel Goldstein: Just five days ago, Saturday morning, I faced evil and the worst darkness of all time right in our own house of worship, right at Chabad of Poway. I faced him and I had to make a decision. Do I run and hide, or do I stand tall and fight and protect all those that are there? We cannot control what others do, but we can control how we react.

My dear Rebbe taught me the way react to darkness is with light. It was that moment that I made a decision, no matter what happens to me, I’m going to save as many people as possible. I should have been dead by now based on the rule of statistics. I was in the line of fire, bullets flying all the way. My fingers got blown off, but I did not stop. The rabbi taught me as a Jew, you are a soldier of God. You need to stand tall and stand fast and do whatever it takes to change the world.

My life has changed forever, but it changed so I could make a change and I can help others learn how to be strong, how to be mighty and tall. Many have asked me, Rabbi, where do we go from here? How do we prevent this? And I–my response is what my Rabbi told me when President Ronald Reagan was shot. The rabbi said we need to go back to the basics and introduce a moment of silence in all public schools so that children from early childhood on could recognize that there is more good to the world, that they are valuable, that there is accountability, and every human being is created in God’s image. If something good come could come out of this terrible, terrible, horrific event, let us bring back a moment of silence to our public school system. I also want to thank the United States of America. I’d like to thank our dear Honorable Mr. President for being, as they say in Yiddish, A Mensch Par Excellence.

Mr. President, when you called me, I was at home weeping. You were the first person who began my healing. You heal people in their worst of times and I’m so grateful for that.

Rabbi Yisroel Goldstein: You have helped me bring great honor to Mrs. Lori Kaye of blessed memory, a 60-year-old dear friend of our congregation. I’ve known her for 25 years, a staunch volunteer. She works for the Friendship Circle, an organization that helps children with special needs. This year on June 2nd, we are doing a march in her memory to show that nothing is going to stop us. We’re going to march with victory and you helped us bring Lori Kaye great honor. And God bless you and God bless America.

President Trump: Thank you very much. Such beautiful words. A great man. And he said this is my greatest moment in life to go from darkness to the White House. Right? That’s great. Beautiful. Thank you very much, Rabbi. I appreciate it. Anything we can do, you know that.