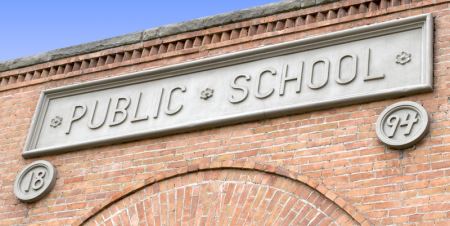 When a shocking tragedy like the recent Parkland, Florida mass school shooting takes place, the media keeps it in the headlines for days. Television inundates our senses with sights and sounds that reinforce the human emotion of the calamity while the drama is relived in front of our eyes day and night. The media milks an event like this for all the ratings it’s worth, keeping it in the news-cycle for up to a week, or at least until the next natural disaster or political scandal comes along.

Our senses can easily become overwhelmed by the relentless rehearsing of the story and its horrific details, all presented in a manner calculated to elicit an emotional response rather than rational thought. If we’re not alert, and diligent to exercise critical thinking, we can quickly lose perspective and join Chicken Little in believing that the sky really is falling, that mass shootings are sweeping the land, and that if the government doesn’t do something quick, “we’ll all die!”

Mass public shootings (properly called “mass murder,” unless you’re trying to sensationalize a particular aspect of the incident) are indeed a terrible thing that we should be working to prevent. But how much of the American landscape does the phenomenon of mass shootings really take up as opposed to the amount of news headlines it’s given?

Before we start passing new laws, giving up our rights, or consent to being strip searched at every checkpoint, perhaps we should put the matter into perspective and ask exactly how many children are actually being killed by mass shootings as compared to the various other threats to their lives. We want to stop all evil and protect every child, but it would be wise to know where to focus our attention and direct our efforts so as to have the greatest effect and save the most lives.

Actual Risk of Death Due to Mass Shootings

According to a report by the Congressional Research Service, about 20 people per year were being killed in mass public shootings in the early 2000s, a number that rose to an average of 37 per year in the period of 2009-2013. Since that report, my research indicates that we’ve averaged 60 deaths per year over the past four years. This is for all mass public shootings, which includes workplace, school, restaurant and other public places. A listing of each mass shooting from 1982 to 2018 reveals that 14 percent of those shootings took place at schools (including colleges), giving us an expected annual average of fewer than 10 deaths per year coming from school campuses.

To put these numbers into perspective, in a country of 327 million people, 60 killed per year in all mass public shootings is 1 per 5.5 million. To look at it another way, that’s one person killed per year from among the entire population of Minnesota, or about the same as are killed by lightning each year (51).

While every life matters, so does the truth, and the truth is that the excessive amount of media attention given to mass shootings is creating a very skewed perspective as to the role that they actually play in our society.

The sensationalizing of mass shootings has created a public perception of our country being awash in an ever-rising tide of murder and mayhem reigning in our streets and on school campuses. However, the truth is actually just the opposite. Homicide rates in the U.S. have decreased dramatically over the last couple decades, from over 9 per 100,000 in the early 1990s to only 4.5 in 2014.

At the same time, the number of guns in America increased from 242 million in 1996 to 357 million in 2013. The number of new guns being introduced into the population nearly quadrupled during the same period, from 4.4 million per year to 16 million. While guns may be a preferred weapon of mass murders, the sheer number of guns present in our society obviously is not driving the homicide rate as the two statistics are moving in opposite directions.

Mass Shootings Compared to Other Threats to Children

Though I was not able to find a single definitive document directly comparing the rate of mass school shooting deaths to other leading causes of death among school-age children, I did manage to find the following facts that help provide context for this discussion.

Auto Accidents – The Centers for Disease Control (CDC) reports that over a 10 year period more than 9,000 children ages 12 and younger were killed in car crashes. If we factor in teens and college students, most of which are beginning to drive and have higher accident rates, I expect the number could reach as high as 20,000, or an average of 2,000 per year, as compared to an average of 10 per year killed in mass school shootings. Again, every life is precious, but as opposed to panicking with fear over mass school shootings, it would make 200 times more sense (mathematically speaking that is), to fear putting the kids in the car for a drive to Walmart, or to school for that matter.

Suicide – Suicide is the second leading cause of death in the 15 to 24 year old age group, coming in at over 5,000 per year. That’s 500 times more deaths by suicide than by mass school shootings. Some of the leading causes of teen suicide are listed as, “being bullied, social rejection, relationship breakup, academic failure in school and grade retention.” Bullying generally takes place at school and most social activity and relationships also tend to be related to school activities for this age group. Academic issues of retaining grades is directly a school matter. I expect that as many as a thousand of the 5,000 annual teen suicides could be to some degree school related. As compared to the number of students killed in mass shootings each year (average of 10), teen suicides arising from school-related issues alone is an outright holocaust taking as many as a hundred times more lives.

Drug Overdose – In 2015 there were 772 drug overdose deaths among teens ages 15 to 19. That’s 77 times more killed in this very small age group, spanning only five years, than are killed in all mass school shootings. While not all drug use is the product of school attendance, school is certainly a leading place where children become exposed to drugs, discover connections for obtaining drugs, and sometimes experience peer pressure to try drugs. One addiction treatment center states that “nearly 44% of high school students know a classmate who sells drugs.” If death by mass shootings in schools is “a problem,” then, by comparison, death by drug overdose among students is “an epidemic.”

Gang Violence – The National Gang Center shows gang-related homicides at 2,363 in 2012 as compared to an average of only 60 annual deaths for all mass public shootings. Though school-age children would only account for a portion of those deaths, yet the teenage years are where gang involvement tends to begin. Seattlepi.com reports that, according to a CDC study, “45 percent of high school students have gangs or gang members on their campuses,” a number that drops to 2 percent for private schools, though it is thought that increased parental involvement plays a part in that. Though public schools certainly are not making themselves a target of gang violence on purpose, it seems obvious that the threat to the lives of children arising from gang-related activity on school campuses far surpasses that of mass shootings by many magnitudes.

Sports Injuries – According to Youth Sports Safety Alliance statistics, 1.3 million children were admitted to emergency rooms with sports-related injuries in 2012. From 2008 through 2013, an average of 45 children per year died of sports-related injuries. Even sports programs, most of which presumably originate on school campuses, appear to be killing more than four times as many kids as mass school shootings.

Sexually Transmitted Disease – 6,721 Americans died of HIV/AIDS in 2014. As of 2015, youth ages 13 to 24 accounted for more than 1 in 5 new HIV diagnoses. An estimated 44 percent of those living with the disease are believed to be unaware. By extrapolation, we can expect to lose 200 per year to this disease from among this age group as future annual deaths – and this is only one of the potentially fatal STDs. Sexual promiscuity, much of it originating on high school and college campuses, is killing at least 20 times more of our youth than mass shootings. Yet I don’t hear the same cries to ban sexual promiscuity that I do to ban guns, but that’s a matter of hypocrisy that will have to be addressed another time.

Transit to and From School – A reported 815 students die each year, and 152,250 are injured, during travel to and from school. Those numbers do not include extracurricular activities like traveling to sporting events or marching band competitions, which would likely put the total over a thousand. This is an amazingly small number of deaths considering the total number of children transported to and from schools every day. Nevertheless, transporting kids to and from school, and school-related activities, is killing a hundred times more children each year than are mass shootings. Yet no one is clamoring to “ban the buses” as that would clearly be irrational.

Now that we have some context for the subject, we can easily see that mass school shootings are among the least of the threats that children face. Nevertheless, we certainly want to take whatever appropriate actions we can to protect children from the rare, and rather unpredictable, mentally deranged and demonically tortured individuals who are driven to commit mass murder.

However, if saving lives is really the main focus, then there are much greater opportunities in areas like suicide, drug abuse, gang violence, and the spread of sexually transmitted disease. These deaths are much more preventable than are those caused by the extremely infrequent mass murder perpetrated by a random psychopath, and these activities are killing hundreds, or possibly even thousands of times more children.

Nevertheless, mass school shootings, like all threats to children, ought to be addressed.

Frankly, in light of the above listing of the ways children are being killed, the numbers of children being killed by each, and the degree to which each is associated with schools and school-related activities, I find myself questioning whether it might just be the government schools themselves that are the greatest danger to children.