Presidential Crimes and Corruption at the FBI 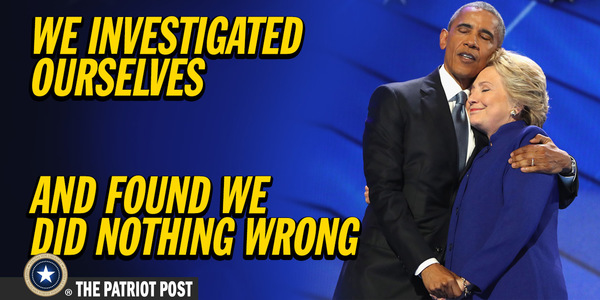 Not only did Obama violate the Constitution in protecting illegals, not only do Democrats violate citizen’s rights in promoting foreign invaders over them, not only did Hillary scrub her emails of national security violations, not only did she have a phony document written to smear Trump,  not only did Obama create an anti-America organization to create chaos called Organizing [against] America paying Antifa fascists to conduct violent protest riots, but even the FBI has been so deeply corrupted that they are destroying evidence proving they are complicit with Obama and Hillary in committing crimes a thousand times worse than Watergate against the American people.

Obama used the FBI like Stalinists used the KGB.  Democrat operatives were elevated and embedded in the upper echelons of the agency from where they could act, not in the best interests of the United States citizen, but in the best interests of the anti-American, neo-socialist Democrat Party.  The reason Democrats believe that the Republicans would use law enforcement like the Gestapo is because that is how they use it.  Do you understand what term “honor among thieves” means?  It refers to the distrust of thieves that, by their nature, don’t trust others because they know that they themselves cannot be trusted.  They believe others will lie, cheat, and steal from them because that is what they will do.  Democrats are thieves.  They are the liars, cheaters, and thieves of the American political system who always accuse Republicans of being, thinking, and doing what they are and do.  Investigate the accusations and charges of Democrats and you will find a void of evidence to support their allegations.  But turn the spotlight back on them and you will see them scurry for the shadows.

As the web of espionage that Obama wove to use American intelligence agencies to spy on the Trump campaign unravels, FBI Agent Strzok has become a key figure.  That the FBI would destroy evidence of his crimes is proof of just how deeply leftist corruption has infiltrated America’s highest law enforcement under the Obama regime.  Everything from the Mueller investigation to the Schumer Shutdown has been orchestrated to distract the public from the darkest truth of the 2016 campaign – that Hillary Clinton and Barack Hussein Obama used America’s law enforcement agencies in the most corrupt and criminal effort imaginable – to overthrow the results of a lawful election.  As Democrats throw open their states as sanctuaries to foreign invaders, as they slander everything President Trump does in restoring the American economy, and as they try to burrow under rocks to hide from the truth, Americans are slowly having their eyes opened to the truth about the party of the rich elites and their globalist dreams.