President Trump’s State of the Union vs. the Democrat Response 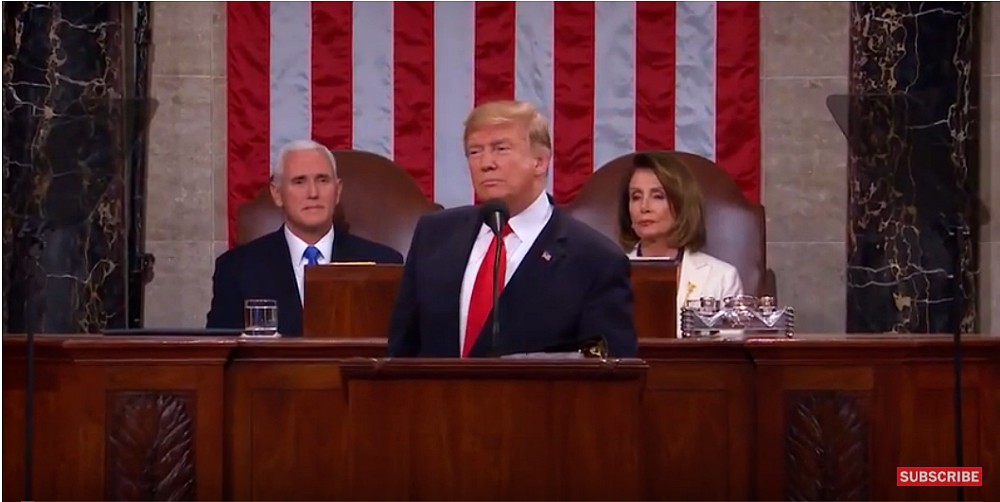 [Republicans cheered has President Trump announced the glorious economic boom he has fostered by doing away with Obama’s regulations. Democrats sat on their thumbs plotting their coup to keep the border open and enact massive voter fraud. They sat in scorn as Trump vowed to protect American citizens from foreign invaders, deny socialists the power to tax away American’s prosperity, and prevent the infanticide that New York Democrats cheered.]

President Trump is not an artful speechmaker, but his words carry the infinite weight of truth.  He rightfully trumpeted his great achievements in fostering the conditions for a great booming economy, great improvements in foreign diplomacy, and the rebuilding of America’s military.  His actions in reversing Obama era regulations have made American energy first in the world!  He also slapped Democrats for their refusal to secure the border while living behind their own walls, continuing to conduct a bogus investigation slandering Trump and Republicans, and worst of all, condoning infanticide.  Making a deal with Democrats should never be done by cutting America’s throat.

Almost no Democrats stood and cheered for his declarations about unemployment being lower than ever, pay to be better than ever, preventing foreigners from invading to steal from Americans, stopping infanticide, or keeping America free from the tyranny of socialism.  The Democrat response was also absent from reality talking about economic collapse, and the false narratives of gun control, climate change, and investigating their Russian fraud.  They lied to make their case for illegal provisional ballots being counted by calling voter law “voter suppression.”

There is no doubt now that they have control of the House that Democrats will strive to make their economic collapse a reality as they did in 2008.  But they need control of the Senate to conduct their sabotage.  Their pathetic response painting America as darkly as possible, smearing President Trump, and slandering Republicans as Nazis and racists while they conduct their “resistance” to making America great again was disgusting to behold.

What can you say of Democrats who believe in fictions, hate Trump and Republican voters unconditionally, and work to aid invading criminals while promoting frauds to undermine, sabotage, and enact a coup against the rightfully elected president?  America cannot continue with this division in which Democrats demand it be their way or the highway.  The people who have no moral conscience in terminating babies would have no moral conscience in instigating a genocide on their political enemies if they ever got the full power that leftists with all their subgroups of socialists, communists, fascists, Nazis, Islamists, and bigots crave.

Most telling of all is Democrats contention that “voter suppression” never be allowed and that all votes should be counted as they battle to keep the border open even to the worst of criminals conducting human trafficking, selling sex slaves in America, and smuggling drugs to dealers to poison Americans to death.  Like conflating illegal aliens with immigrants, Democrats conflate fraudulent provisional ballots with legitimate ballots.  In doing so they allow illegal ballot box stuffing to artificially and immorally increase their vote tally.

That’s why they want America to be made into a democracy rather than a republic so they can corrupt the nation through the ballot box.  The Colorado State Assembly of Democrats just voted to give all the state’s electoral votes to the winner of the national majority rather than the state’s majority, so even if Coloradans vote Republican, they would have given the entire state’s electoral tally to Hillary because of California’s millions of illegal provisional ballots.  Democrats used this fraud to turn the elections in Arizona, Montana, and most blue state’s congressional elections declaring that not counting multiple illegal provisional votes is voter suppression.  The actual voter suppression is Democrats allowing illegals, felons, and other criminals making multiple votes to override that of citizens.

Democrats falsely claim that “good ol’ boys” of the KKK became Republicans when the South and North swapped political majorities.  Those who believe it was this rather than the immigration of northern Republicans to the South to escape Democrat union oppression are mere dupes who believe in Democrat nonsense.  President Trump has kept his promises to voters unlike any president in history.  Don’t let Democrats enact a coup either through their bogus investigations or ballot box fraud to seize power back and complete the corruption of America to transform her into a banana republic socialist toilet.

Last Gasp of the Republic